That's What She Said: What Men Need to Know (and Women Need to Tell Them) About Working Together 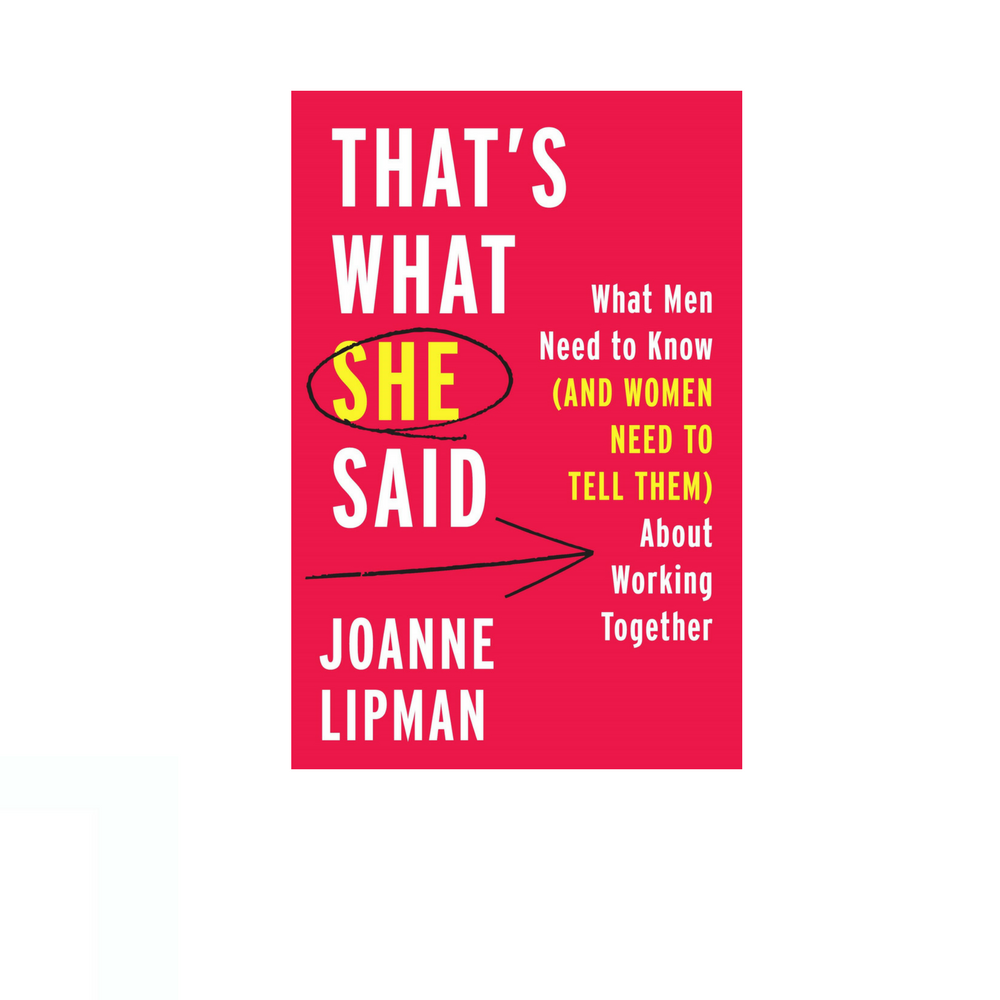 In the wake of #MeToo and #TimesUp, women are banding together to amplify issues they face including being overlooked, interrupted, marginalized, sexualized and not rewarded for their contributions in the workplace.  Men, however, are often excluded from the conversation.  Joanne Lipman, veteran journalist and former Editor in Chief of USA Today,has authored a just-released book which actively invites men to the join the discussion.  She posits that women talking to each other can only generate half a solution.  Lipman's case for inclusion of men in healing the gender divide is a game changer.  MediaVillage and Jack Myers KnowledgeExchange are pleased to share the following exclusive excerpt, below, to provide you with a taste of the evidence-based strategies that the full book delivers. -– Forward by Jack Myers

This book began with a flight to Des Moines.  In most ways, it was uneventful.  The businessman sitting next to me couldn't have been friendlier.  Over plastic cups of white wine, we chatted about his business, his new house in a New York suburb , and his kids' sports teams.

Then I mentioned I was on my way to speak at a women's conference.  Suddenly my neighbor froze.

I looked down awkwardly into the bottom of my wineglass.  My seatmate gave me a sideways glance and reached for an explanation.

"I had to go through diversity training a few months ago.  It was awful."

It's all your fault.

My seatmate's words struck me.  The truth is, I'd heard some version of them dozens of times before.  I'd seen the body language, the Don't yell at me! flinch, more times than I cared to remember.  I'd watched self-assured, confident men curl into that defensive crouch when the subject of women -- or, God forbid, the phrase "gender equality" -- had come up.

My seatmate and I spent the rest of the flight in awkward silence.

The next morning, several hundred women gathered in a hotel ballroom.  I had been invited to speak about some of the most common issues women face at work -- being overlooked in meetings, being underestimated, watching men getting credit for our ideas.  As I spoke, I watched those several hundred female heads nodding in recognition.

I stopped right in the middle of a sentence.

"We already know all of this," I said.  "We need men in this room to hear the message instead."

That disconnect between men and women makes no sense to me.  If women only talk among ourselves, we can only solve 50 percent of the problem.  We need men to join the conversation, to be our partners.  And as for the men, most of them aren't anywhere near villains.  They don't need beating up with a two-by-four.  They'd like to see an equitable workplace, they just can't figure out what they're supposed to do about it.

And yet men often recoil from the conversation about closing the gap.  Some simply aren't interested.  Others are sure they have no problem with women themselves; it must be some other guys who do.  And some feel victimized, as if the very topic is an implicit accusation.  They're sure the gap doesn't exist at all, that if anything women are getting an unfair advantage when it comes to jobs and opportunities.

Indeed, by some measures outright hostility toward women has increased, or at least become more visible, over the past decade.  One out of five men in a global survey of more than 17,000 people in 24 countries said that women aren't equal to men.  Almost half of women as well as men surveyed in Russia and India believe women to be inferior.[i] And this was a survey done in 2017.

Those attitudes make it even more difficult for men who do want to reach across the gender divide.  When Robert Moritz, Global Chairman  of consulting firm PricewaterhouseCoopers Int., wrote a LinkedIn post about why the firm values diversity, commenters -- professional men, using real names -- called his ideas "repellent" and "an affront to every white man," and argued there's "no such thing as a real business run by a non-white man."  One suggested that he "surrender your job to a diversity hire and stay at home as a house husband."[ii]

It's no wonder that men feel stymied, fearful of speaking out on behalf of women.  They're just terrified of saying something wrong.  When Catalyst, a nonprofit organization focused on working women, asked men what might undermine their support for gender equality, a stunning 74 percent cited fear -- fear of loss of status, fear of other men's disapproval and, most telling of all, fear of making a mistake. [iii] Men are walking around on eggshells.

[i]  Kully Kaur-Ballagan.  "Three in four women around the world believe there are unequal rights in their country." Ipsos MORI, March 7, 2017.

[iii]  Jeanine Prime and Corinne A. Moss-Racusin. "Engaging Men in Gender Initiatives: What Change Agents Need to Know." Catalyst, May 4, 2009.

From the book That's What She Said:  What Men Need to Know (and Women Need to Tell Them) About Working Together by Joanne Lipman. Copyright © 2018 by Surrey Lane Media, LLC. Reprinted by permission of William Morrow, an imprint of HarperCollins Publishers.

Joanne Lipman is author of That's What She Said: What Men Need to Know (and Women Need to Tell Them) About Working Together. A veteran journalist, she most recently was Chief Content Officer of Gannett, and Editor in Chief USA TODAY and the USA TODA…