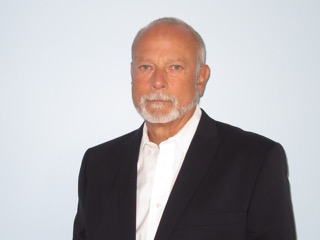 In a series of conversations with the leading confidants and consultants in the ad automation and programmatic area, Jay Sears, Senior Vice President Marketplace Development of Rubicon Project, discusses trends and issues of the day impacting advertisers and media owners. In the first installment of this series, Sears speaks with Jon Mandel, Chairman of Dogsled Enterprises, Inc. and a longtime WPP executive. In 2015, Mandel made headlines during a speech at the Association of National Advertisers media conference when he suggested advertisers are unaware how much their ad agencies profit from media owner rebates.

Do you know a leading ad automation consultant in the ad automation and programmatic area advising advertisers and media companies that Jay should consider interviewing? Tell him.

MANDEL: Eclectic. Anything from The NewYork Times to The Globe and Mail to The Guardian and the BBC. The important thing is to explore them sort of in the way that Quartz does “obsessions” or “suprising discoveries” or ReDef finds weird stuff. And of course there are others like New York, Atlantic, Politco. And more than that, just randomly talking to people in my travels. I think we don’t do enough almost anthropological curiosity kinds of things in our business. It isn’t just about read and learned; it is about touched and felt.

MANDEL: I kinda think that is more of the same as politics, art and culture because my friends cross many political spectrums and have wildly different tastes in everything from music to art to food.

MANDEL: If you mean pure tech, then AdExchanger and Digiday. But there is some in the others as well such as MediaPost, Ad Age, Adweek, Mumbrella, Campaign, etc. But again, I think more important is talking to people. Otherwise you are just in an echo chamber of fanboys. You have to talk to the middle level people at agencies and clients using the stuff … the top guys at the agencies naturally are skewed by their compensation/agency agendas. I think you also have to use the media as a consumer … think of how it feels to them but with your professional eye. Go to a site you wouldn’t normally visit and think of how the content and the ads feel to someone who would be on the site. How does it feel? It is important not just to think of the tech in a clinical sense but also in how what is generated is perceived by the audience to the media fed by the tech.

MANDEL: I am not a big fan of DR commercials which is the only place I think that is a valid question. If you talk about campaigns that is different. Although since I am not really privy to some of the numbers I can’t say one of my many personal favorites like Dove Real Beauty was good or not. But there are tons more over the years. Usually they involve many commercials that collectively weave a story, build a character.

MANDEL: Often the engineers aren’t fluent in marketing (although they think they are, like every cab driver thinks he knows how to improve “Game of Thrones”). Clients aren’t really fluent in tech. They each may have a tourist’s conversational capability but they get hung up in the mountain dialects. We have to bridge that gap. Sometimes it is like being the person who talks into everyone’s ear at the UN translating. In a bigger sense, we sort out if there is a there there for a given client with a solution provider.

SEARS: Tell us about your firm.

MANDEL: We come at it from the consumer of our clients’ products and work backwards with a marketing brain of how we increase that revenue. Then we go up the chain to find what efficiencies or even more than that effectiveness gains can be made by adding to or tweaking the media process, selection, methodology and so on.

SEARS: What are the most common issues you help clients on regarding automation?

MANDEL: Too few people in poor performing tech companies have actually worked in marketing. As a result they don’t really have solutions as fully wonderful as they think they have. They often are attacking the wrong problem. It is like if you brought your car to a mechanic and they replaced the broken part but not what caused the part to break.

MANDEL: I think they know their weaknesses in addition to their strengths and they listen and are willing to try to bend their product to a better solution. Plus they are honest about the state of the product and what it can do and what its limitations are.

MANDEL: I think it depends if you are asking about the demand gathering types of advertising which online has been very good at and has moved over. But that is the low rent advertising with no pricing power due to infinite inventory and I think they will continue to dominate that space. If you are talking the demand generating side then you mean video and Google has a head start there with YouTube but it is a wide open playing field. And Facebook has to do video more and in general scale more to get their average audience up. But again, in video it is wide open. 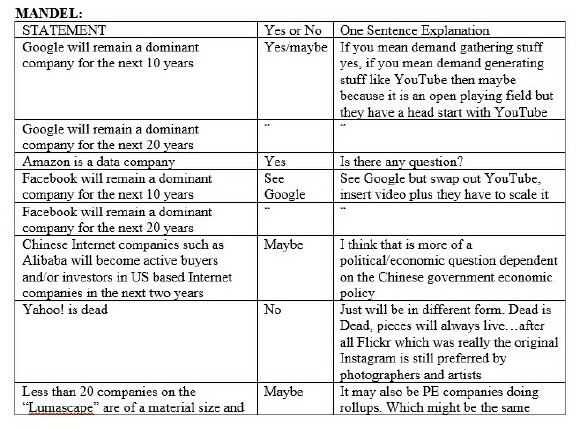 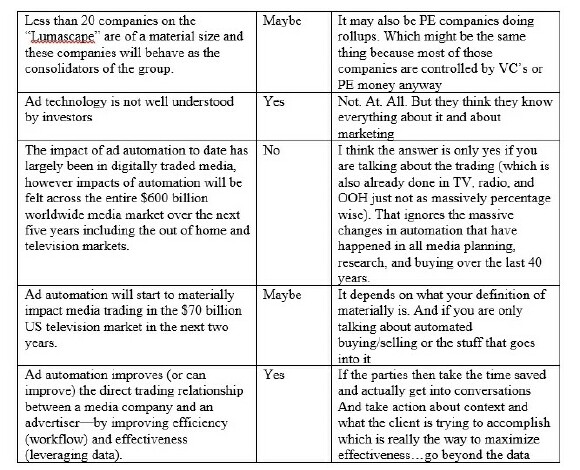 MANDEL: I love discovery. I value truth and honesty. I know I can be a pita at times, or often according to some, but it comes from a place of wanting to make the world, from our industry to our planet, a little better off than I found it.

MANDEL: I would take my daughter and a couple of very close friends who are not in our business and are from very different worlds … widely divergent education/economic/political groups. I think I would like to explore Asia some more, some of the areas I haven’t seen yet. Either that or do a cycling tour of Vietnam because I think that would be a fascinating way to re-discover that place.

MANDEL: Diabetes Research Foundation. The way that they approach research like a business problem and the requirements they make of the researchers is brilliant and leading to progress for a cure, not only for diabetes but for other diseases that have been helped as a byproduct of JDRF’s work. Plus, like too many charities, it is personal as my daughter has been Type 1 since she was two.

MANDEL: That changes every day all day, but as I am answering this I am thinking of the lobster in vanilla sauce I had years ago at some place in Paris. By this afternoon I’ll be thinking of a pastrami from Katz.’