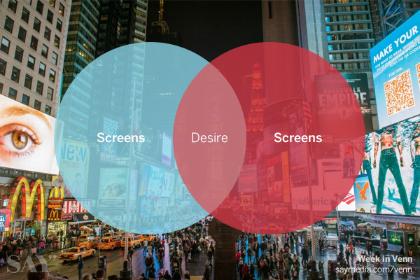 There's a famous phrase from Canadian philosopher Marshall McLuhan that gets a regular workout in media columns. "The medium is the message" has been quoted so many times that using it is almost a cliché. Media aficionados attempt to interpret this phrase in a number of different ways, and it even has its own Wikipedia article that explains the meaning: "McLuhan describes the content of a medium as a juicy piece of meat carried by the burglar to distract the watchdog of the mind." Looking past the florid writing style and larceny metaphors, McLuhan's point that while we get distracted by content, we can miss the changes and developments that are instigated by the medium itself. This is never more accurate than when applied to mobile. We've had mobile handsets in our pockets for 30 years, and in that time we've been so absorbed with what content we could push onto our handsets, it's only relatively recently that people have started to pay attention to the multi-screen world we now find ourselves in.

McLuhan first used his famous phrase back in 1964, and here we are, almost 50 years later, using our mobiles to consume and experience more media than ever before. We now spend vast amounts of time on the mobile Internet, playing games, streaming media and using apps. The initial discussions about the impact of mobile screens on more traditional media, such as TV, seem to have been put to bed. It turns out that viewers didn't swap one screen for another, they just looked at more of them; often simultaneously.

Traditional publishing models that have for so long relied on one-way advertising are in a state of flux as the balance of power shifts towards the consumer. Audiences are loyal to talent or content but they don't feel the same loyalty to channel. From a pure content point of view, radio drama fans can listen to The Archers on their mobile while they sit on the bus, just as they might listen to it on a kitchen radio, and kids will happily stream Horrible Histories on their tablets in the back of the car or watch it on TV at home.

In the commercial arena, advertisers and brands have had to become the talent as channel-centric marketing continues its inexorable demise. Some cottoned onto this notion quicker than others. Coca-Cola, a brand that arguably relies on marketing innovation above and beyond all else, wasn't the earliest of early adopters, but it was certainly the first international brand to recognize the idea of brand as talent in a coordinated, cross-channel approach. Coke called their strategy "Liquid and Linked," but other companies like Hyundai and Xerox have followed a similar approach.

Audiences in the new online sales environments, often driven there by social media, increasingly reject the homogenisation of experiences through moving images in favor of media they can invent, make their own and share on their own terms. Through ownership of extraordinarily powerful and easy-to-use mobile devices, they no longer wish to be passive voyeurs and demand to be the subjects of their own dramas, with their world in their pockets. 'The age of mobile' has undisputedly arrived and it's evolving by the minute.

As we enter the next phase of our online development, we can apply McLuhan's questions to mobile. If we accept mobile to mean all portable screens, then we get the following responses: Mobile enhances connectivity, real-time interaction and personalized user experiences. It renders the microsite and traditional data capture obsolete. It has revitalized the editorial print industry, albeit in digital format, and when pushed to extremes the mobile channel becomes the ultimate customizable consumption channel. Welcome then to the post-McLuhan age of the hyper-individual, socially powered brand experience where we can hunt down our own content, reinvent it, reformat it, republish it and call it our own.