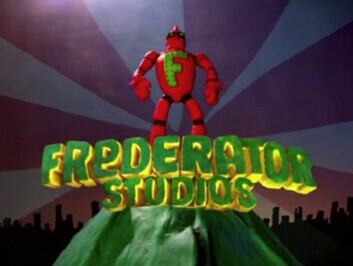 The most visible American animation studio in children's entertainment today, Frederator Studios has built its reputation on animated series that are just risqué enough to keep kids happy, just wholesome enough to keep parents happy, and surprisingly daring, innovative, and entertaining for both child and adult audiences. Regular Show and Cartoon Network’s Adventure Time stand as two children's television series that draw both children and childless over-twenties due to their wit and humor. The most successful series among the dozens created by Frederator Studios include Wow! Wow! Wubsy on Nick Jr., and The Fairly OddParents on Nickelodeon.

Straddling the line between straight kiddie cartoons and adult sitcom humor has worked well for the studio. Consider Bee and Puppycat, a currently in-production series that was funded via Kickstarter after its pilot episode became a viral hit by mixing real life young adult concerns over finances and unemployment with space opera and slapstick. Drawing support from several age groups, from children to middle aged animation buffs and an army of young adult fans, Frederator has raised $872,133 for Bee and Puppycat (as of 12/1/13), well beyond the $600,000 goal. The studio has pursued innovative financial models that allow them to take a chance on concepts that other studios might deem unmarketable and to underwrite daring shows like Steven Universe. 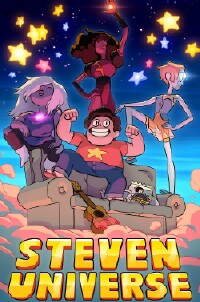 superhero, but the only male member of a band of Sailor Moon-esque superwomen. Even his superpower, a magical gem embedded in his belly button, isn't the kind of thing you would associate with a He-Man or a G.I. Joe. Not only does the show flip traditional cartoon gender roles, the heroines are multi-cultural as well. Although the characters' racial backgrounds are ambiguous, given the fantasy setting, white is not the default skin color for the cast of the show, nor is thin and blonde the default appearance of the female characters. Developed by Rebecca Sugar, the series features superheroines who are short, thick, tall and athletic, as broad and varied as women are in real life.

Steven’s father is a failed musician who lives in a van and runs a car wash, yet he's not portrayed as a typical deadbeat dad, but as a charming, funny, flawed, but ultimately welcome influence in Steven's life. Steven's mother, Rose Quartz gave up her physical form in order to give birth to Steven. She was a beautiful crystal gem who Steven’s “older sisters” looked up to. Rose Quartz saw the goodness in Steven’s dad. It’s a Classic “you don’t have to be perfect to find love” story. Steven himself is teased from time to time by the teenage boy at the donut shop next door, but treasured by his peers in his role as "little brother" to three strong women. The show may prove to be a positive influence on a generation of boys and girls growing up in a world where gender roles are no longer assumed.

It might be fair to say that the sheer weirdness of 1990's children's television broke the ice for Frederator. The often-surreal humor of Ren and Stimpy, Rugrats, All Thatand perhaps most of all, Spongebob Squarepants, almost certainly helped to set the stage for Frederator Studios to take the spotlight. As pointed out in Hooked Up, the definitive book on the first generation of Internet Natives, “Nickelodeon had a strong influence on Internet Pioneers during their formative years, and many of their ideas, perspectives, sensibilities and attitudes can be tracked to these early television viewing experiences.” Frederator could prove to be the Nickelodeon of the emerging post-Internet generation.

The Bee and Puppycat pilot features, in the span of ten minutes, the lead character losing her job and meeting the titular Puppycat, who resembles both a puppy and a cat, as well as Wallace, a giant fish, who transforms into a monster after a disappointing story about a space outlaw and a gang of Warlocks. Had they not been reared on such bizarre, playful, "anything goes" entertainment as Spongebob Squarepants, would more than 18,000 young adults have poured their hard-earned money into a Kickstarter for such an unusual TV series?

It might also be said that Finn and Jake of Adventure Time owe some of their courage and optimism to Spongebob himself . Spongebob Squarepants' often dark humor was made palatable by a lead character who would face every situation with a sense of humor and a positive attitude. How else could a children's show get away with an episode where the title character and his boss attempt to bury a presumed-dead choking victim in an attempt to avoid going to prison, than with a character as happy-go-lucky as Spongebob?

Of course, we could also ask if there could be a Spongebob Squarepantswithout Frederator founder Fred Seibert. Seibert was the first creative director of MTV, a major force during the formative years of Nickelodeon, and the Hanna-Barbera president who gave us offbeat shows like Courage the Cowardly Dog.Seibert has been a progressive, subversive voice in television, particularly children's animation, dating back more than three decades.

Frederator draws from a rather large pool of talented content creators in order to develop its shows, so it may seem hard to pin a single theme to the entire slate of series.We could also consider Adventure Timecreator Pendelton Ward's insistence that he tries to avoid overt messages, but some running threads become obvious.

First, traditional social roles -- gender and otherwise -- are frequently reversed or subverted. Steven Universe is proud to be a member of a team of cool superheroines; he doesn't feel compelled to try and take the lead just because he's "the man" of the group. Finn, of Adventure Time, is an adoptee to a family of magical shape-shifting dogs. Frederator frequently presents us with characters who are comfortable with non-traditional family lives, and non-traditional roles within their peer groups.

Second, the often-surreal humor of these shows reflects and encourages a free-associative, imaginative approach to life. At the same time, the shows frequently have adult themes hidden in imagery, visual gags, and quality writing. This helps keep older viewers engaged.

Finally, and perhaps the most important lesson, life is never so dark and challenging that we can't find some fun to be had in it. Frederator's writers frequently delve into dark humor and scary situations but counter-balance the stories with unflappably positive heroes like Steven Universe's Crystal Gems and Adventure Time'sFinn and Jake and Princess Bubble Gum.

In Adventure Time, a cast of characters lives in the post-apocalyptic Land of Ooo, where zombie-like creatures co-exist with the Candy People, who are given life by Princess Bubble Gum (a motherly but scientifically focused leader). New characters are introduced who reflect on today’s society and culture. For example, the Business Men are a group of characters introduced in the episode Business Time. “The Business Men appear to only understand work as we know it in contemporary 21st century America, and everything else is structured around the efficient implementation of that employment. They seem to have some shadow of creativity and internal motivation, but only within the construct of a hierarchical business (in which Finn and Jake are the bosses). Their loss of identity without their job, and that they remember nothing of their humanity but their careers, could read as social commentary on the nature of modern full-time work and its zombie-like effect on the psyche (e.g., "working stiff").”

The Adventure Time series is evolving as viewers learn more about the Mushroom Wars that led to the post-apocalyptic world in which the series is set and where Finn may be the last human being. Is it possible that this post-apocalyptic world (unlike that of The Walking Dead) will prove to be a more positive world than we live in today? As Bee and Puppycat, along with other Frederator series, evolve and gain popularity among expanded generations of Internet Natives, we can expect the studio to sustain its core message: we can build and live in a more humanistic world where we survive and co-exist with the constant attacks of zombie-like creatures.

Within the Frederator studios exist series that we may look back at decades from now as the most influential TV programming of our time.

Gilbert Smith is a writer who lives in New Mexico where he watches way too much television. Claire Burden is a senior at The Beacon School in New York City who has watched every episode of Adventure Time and Steven Universe and who was the inspiration for and a major contributor to this article.

Gilbert Smith is a writer who lives in New Mexico where he watches way too much television. Jack Myers is a media ecologist and chairman of MyersBizNet, a network of more than 200 media and advertising companies. Claire Burden is a senior at The Beacon Schoo…