The CW: Living in "The Republic of Sarah" 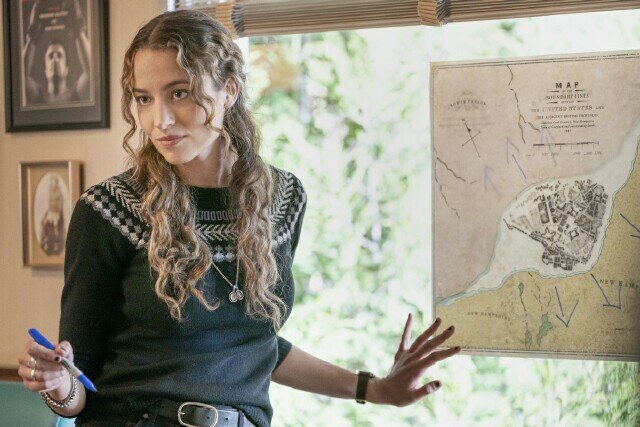 What happens when big business threatens to turn your quaint New Hampshire community into a mining field? You find every loophole you can and secede from the country that governs you. That's what happens to the inhabitants of Greylock in the new The CW series The Republic of Sarah. The initiative, led by high school teacher Sarah Cooper (Stella Baker), is an interesting premise for anyone with a love of civics and comes from Jeffrey Paul King, who also executive produces the series. It was his fascination with cultural geography that birthed the series. "I was finishing my run on Elementary and looking to get something on the air," he explained while recently promoting the show. "The idea of building a country always intrigued me, and as far as an interesting engine for episodes, there's an endless number of things you have to deal with.

"The joy of those things runs the gamut, from the absurd -- like what color is your money and what does your national anthem sound like? -- to the really serious, like what's your banking system?" he continued. "Growing up a punk rock kid in New Hampshire, I was more interested in that spirit. [Now I'm] marrying those two ideas together, building a country from scratch, then trying to populate that premise."

It's an idea King has been percolating for the last three and half years, first at CBS, which ordered the original pilot, then passed on the series. King believes that was probably for the best. "The CW called, and we were really grateful they did," he recalled. "We were able to work with them and changed the [original] pilot, making it sharper and much better. For me and a few of the EPs, this has been the last few years of our lives. My undergraduate degree is in cultural geography. That's something I've been passionate about since I was 15. So, this idea of really interrogating what it means to build a country is something that's been in my head and in my heart for a long time."

King revealed significant changes were made in adapting the series to fit The CW's demographic. "We aged it down considerably," he said. "The primary cast [originally] was mid-30s; this cast is primarily mid-20s. Sarah was always a teacher, but in the first pilot, none of her students really had a voice, whereas some of them are now vital pieces of the show. It got edgier and more specific in terms of who Sarah was as a person. I think the blessing and the curse of this show for CBS was it was unique. I'm happy to take the blame for it not being as specific as it could have been, but I'm really grateful that with this iteration we got to really sharpen [it]."

Entrusted to lead King's vision of a new republic, by way of default, is Sarah (if the title didn't already give that away) and according to star Stella Baker, her character does have traits that qualify her for the position. "I think it's Sarah's basic knowledge of U.S. history, topography, and like Jeff said geography," she shared. "She has a wealth of knowledge in that area, and such a progressive outlook on the possibility of what a country can look like. But at the same time, she's a little impulsive, and can make quick, reckless decisions. At times she believes she has the best ideas for everyone, and she needs help. I think one of the biggest challenges for Sarah is figuring out how to reach out and get help because you can't do this task alone."

When it comes to Baker, she admits to having limited qualifications to run a republic. "I would not trust myself to run a country," she laughed. "Certainly not! I don't have the expertise for that. But I am a bit of a control freak, so I guess Sarah and I share that."

"What I find interesting is that it also exposes things," added Megan Follows who plays Sarah's mother Ellen. "Like rights and things we know and take for granted when we live in a society where there's structure that we've fought hard for. So, at the birth and the beginning of something, there's an assumption that there will be rights and rules in place. We learn people fought very hard for those and they were born out of needs and necessities, or for people trying to stop certain people from having rights. That's a fun exploration in this show."

"If we're doing a poll in Greylock about a new law or the Constitution, everyone expresses an opinion that is heard," added Baker. "I think we're moving back towards more of that grassroots. [More] focused on your community, focused on your local preventatives to get to pass policy that relates specifically to the people around you. It's just that in Greylock, when people vote for something like that, or engage civically, its laws for the whole country. I don't think it's so different than when we show up to our town hall and say this is what we care about and this is what we need."

The Republic of Sarah is telecast Mondays at 9 p.m. on The CW.