The Emmy Moment That Got Away 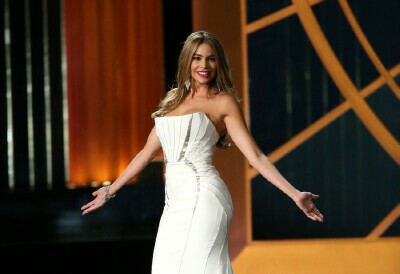 Here's what was wonderful about Monday night's Primetime Emmy Awards, in no particular order: All the awards for “Breaking Bad”; everything Bryan Cranston did (from that smooch with Julia Louis-Dreyfus to an inspiring acceptance speech), “Fargo” being named Outstanding Miniseries, “The Normal Heart” being named Outstanding Movie; the beautiful In Memoriam sequence headlined by Sara Bareilles' rendition of “Smile” and Billy Crystal's thoughts of Robin Williams, and “Billy on the Street.”

Here's what was far from wonderful about the same event: “Orange is the New Black” being passed over, “Fargo” and “The Normal Heart” being denied key acting and creative honors, Cicely Tyson losing out for “The Trip to Bountiful” and Weird Al Yankovic's interminable song melody.

Of all that transpired Monday night, the one segment that had people rushing to their Twitter accounts, and left yours truly the most mortified, was the sight of “Modern Family” co-star Sofia Vergara (pictured above), in long white dress, centered on a rotating pedestal as Academy of Television Arts & Sciences chairman and CEO Bruce Rosenblum spoke about the need to offer more compelling TV to viewers while trying to keep a straight face.

A large chunk of tweets found the bit sexist, titillating or a satirical backfire. Was it all three? Yes.

However, what got me most upset about that moment, coming near the end of Emmy's three hours on NBC, was that an opportunity Rosenblum had in front of millions of people went right into the garbage: The opportunity to enlighten that large audience about where the Academy is at and where it wants to take the medium.

Rosenblum and the Emmy organizers had the chance to document how under their new leader, diversity in the medium will increase, opening up more opportunities for women and people of color; the chance to share how to engage with the next generation of TV creators and technology inventors; the chance to showcase efforts to improve media literacy and cast a light on social issues, and to trigger more interest in what TV does best.

All that could have been presented and demonstrated in a creative, stimulating manner when Rosenblum had center stage and an audience with open eyes and ears Monday night. Instead of getting all that across, we got an audience riled up about Sofia Vergara's time on that moving platform.

For many, that's what they will remember most about Monday night's presentation. What an opportunity to let slip away. What a shame.

One more point: Washington Post television critic Hank Stuever included a proposal with his Emmy critique: Discard the Outstanding Comedy/Drama series categories in favor of new categories for Outstanding New Series and Outstanding Continuing Series with up to 10 nominees in each. That way, more new series in this boom-time of scripted content could be recognized, especially series such as “Orange is the New Black” that are unclassifiable in classic genre terms. Call this seconding Stuever's motion with one modification: Have a pair of these categories for scripted TV, another pair for non-fiction TV. The Academy should take this under consideration.