Wendi McLendon-Covey of "The Goldbergs": “We’re Almost at Syndication, Baby!” 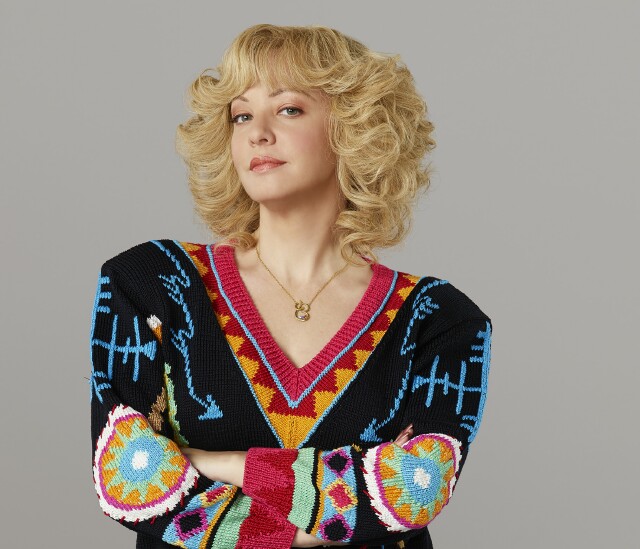 As Beverly Goldberg on ABC’s hit comedy The Goldbergs, week after week Wendi McLendon-Covey proves she's one loving mother. It doesn’t matter if her kids are treating her with complete disdain or clever manipulation, the sweater loving “smother” is always on hand for her family. Wendi credits the real-life Beverly Goldberg (mother of Adam, the creator of the series) for inspiration when it comes to loving your kids through the trials and tribulations of adolescence.  “No one loves her kids more than [the real] Beverly does,” Wendi recently told me. “But isn’t that what parents do?

“The actual Beverly Goldberg is on Twitter and if you are inclined, I recommend you follow her,” she continued. “She’s interacting, posting pictures and answering questions. And she really was a substitute teacher at her kids’ school! That was her way of saying, ‘My kids are growing up. I have to build my own life so let me sub at their school.’ That way she could always hover and it’s hilarious; in fact, it’s genius.”

According to the actress, while there are both good and bad points to being a “smother” no amount of coddling your child is going to prevent the inevitable. “I don’t have kids, so this is all very new to me,” she said.  “But my theory is, you’re going to screw your kids up.  You’re just going to.  In hindsight it’s always, ‘That book said to do this and I should have done it, but I didn’t.’  I watch my friends with kids and sometimes the kids will say the shadiest, snottiest things to them.  I can’t imagine loving someone so much that I would allow that!”

However, the onscreen, often contentious, family dynamics her character navigates in every episode aren’t too far removed from those of her own teenage years – when, she said, she made her mother’s life hell.  It’s those tumultuous teens that she now credits for understanding how to love a child unconditionally.  “I’m really feeling what my mother went through,” she laughed.  “Yes, I do make a lot of apologies now. When I think back on some of the awful things I said to my mother, what a little bitch I was and now I really feel awful. Although, I have to say a lot of times I feel I was being pre-accused of things I wasn’t doing. Sometimes parents do provoke and Beverly is one to provoke.

“But when your kid is about to run into the middle of the street, don’t reason with them -- just pull them back!” she exclaimed.  “You do what you have to do to protect them.  I get that now.  When your kids are adolescents all they want to do is slam doors or cry, and they take everything so personally. I think I cried for about four years straight as a teen because of hormones and [the fact that] I was never going to go out with John Taylor or Nick Rhodes from Duran Duran.  We were never going to go on a roller coaster together!”

It matters not what family discord might lay at the foundation of a Goldbergs storyline; clever writing always ensures the show nails the heart and soul of what it is to be family, ending with a heartfelt resolution.  It’s those moments Wendi cites as personal favorites.  “When I watch the episodes I’m just as surprised as everyone else,” she admitted.  “When I see the footage at the end where they seem to really justify something [that’s happened] … To me it’s great because there are times your kids can be brats.  But what are you going to do?  You’re their parents.  You love them.  They’re just going through something and you can’t punish them for every little thing because life can be terrible as it is.  There’s nothing worse than having a face full of zits and having to go to school.” 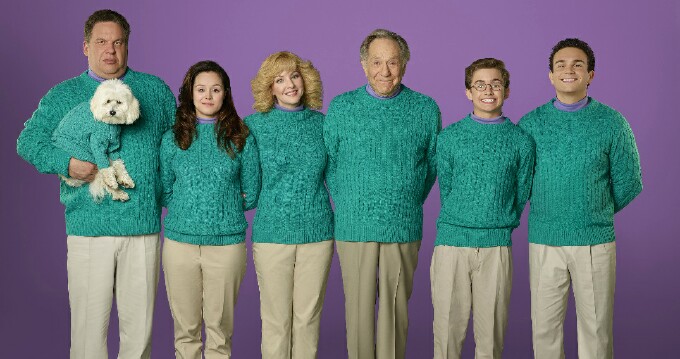 As for the actors playing her sons, Wendi said, “I love them for very different reasons.” (She is pictured above, third from left, with her co-stars Jeff Garlin, Hayley Orrantia, George Segal, Sean Giambrone and Troy Gentile.)

She thinks Troy Gentile, who plays eldest son Barry, is most like the real Barry, while the real Adam Goldberg may have been a little “nerdier” that his on-screen counterpart played by Sean Giambrone, for whom she has high praise.  “If one day he started his own religion I wouldn’t be surprised,” she jokes of her onscreen youngest.  “I would also join because there is something about that kid that pulls you in.

“You really want to be friends with him,” she continued.  “He’s really good at making you feel important and asking questions and remembering information.  For a kid of that age, it’s incredible.  He’s one to ask really intelligent questions and remembers minutia -- just like a politician.  He’s the one keeping us all in line on the set and I really feel like he’s been here before.  He seems to have it all figured out.  I still don’t and I’m in my 40s!”

At the time of our interview Wendi was still awaiting details of the fourth series’ finale, but was excited about it for one reason in particular:  “We’re almost at syndication, baby!” she screamed.  “That doesn’t happen that much anymore!”

She was also thrilled about the episode airing March 1 (another in a long line of homage stories that the series does so well), this time to the ‘80s classic The Karate Kid.

“That one is hilarious,” she raved.  “We have a pretty good twist on the story involving Barry and Adam. A good analogy is, it’s kind of like sending your kid to a chickenpox party [in an effort to prepare them].  I watched the ending being filmed and couldn’t believe what was happening.  My hope is it’s just as much fun for the audience.”

The Goldbergs is telecast Wednesdays at 8 p.m. on ABC.