The Great Takeaways of 2011 - Simon Applebaum 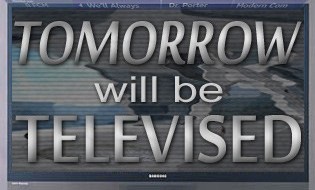 Sorry, but I'm not into best of/worst of TV lists as many of my fellow journalists are, as one year completes and next year draws close. Trends and mileposts that develop over a year, impacting times ahead, are more my cup of tea.

Early on, I noted in different places that what transpires in 2011 would set up the rest of this decade. We sure got a lot of transpiring this year all over the TV world. Here's the big things I'll take away from TV 2011 that will shape 2012 and beyond.

Our cup--make that many cups--runneth over with original programming.More channels presented more original series than ever, and a few networks, including Cinemax, VH1 and ReelzChannel, successfully entered the scripted series field. Every cable channel has the biggest development/pilot agenda in their history running next year, while the broadcast nets are producing the most pilots in recent memory. Series creation is no longer just in the hands of broadcast or cable nets. It's in DirecTV's hands, Netflix's hands, and not so down the road, perhaps in Amazon or Hulu's hands. The new network movement continues, and YouTube's effort to launch as many as 100 services over the next year on both TV and PC may intensify things further.

Diversity in TV must shape up in the coming year or two--or else. Developments in this area were a mixed bag this year. Accentuating some of the positive: Univision became a major nightly TV force, BET scored a greater-than-anticipated audience for The Game revival; VH1 had a winner in Single Ladies, M-net's a rising prospect for the Asian-American crowd and All-American Muslimwas a cause celebre for TLC,despite the Lowe's/Kayak ad pullout controversy. Accentuating the negative: not one new fall scripted series on CBS, NBC, Fox and The CW had a lead actor of color; only 12 percent of 2010-11 scripted series episodes on broadcast/cable combined were directed by people of color, 12 percent by women and 1 percent by women of color (according to a Directors Guild of America survey). In the middle: Comcast's network diversity plan (launching 10 indie services nationwide over its cable systems by 2018, eight from people/organizations of color), where over 100 proposals were submitted for the first three channels (to be launched by end of January 2013), and as of this writing, no news on the winning entrants.

We now know about 40 percent of this nation's citizens are people of color. Sooner than we all believe, thanks to the 2010 Census data coming out this spring, the multicultural majority will happen. If series and networks don't reflect the state of this nation consistently, TV runs the risk of a massive tune-out by a surging multicultural population. It's easy to play blame game on this. Let's take energy wasted on that and organize diversity-accelerating efforts on every level--series, network, production company, studio, executive suite.

Connected TVs are hot and the interactive TV movement fires up with them. Every TV set maker has models on the market offering Internet sites, interactive application stores, or both. If they don't now, they will on display in Las Vegas early next month at International CES. Connected sales are up, despite overall TV buying way down. One early signal to watch for: how many of those set makers adopt Google TV, now that their second go allows the 200,000-plus Android application developers the ability to create new TV services while adapting what they've already produced for mobile phones. Also, how many of those Android developers take this opportunity? Will Apple Computer bring out that rumored TV set with far-advanced bells and whistle features, such as manipulating what you watch by voice and body? Will some set maker beat Apple to the punch on the latter?

Get ready for the ultimate, most intimate social medium--video telephony. More new TV sets are having micro-cameras installed so family members can call each other and watch themselves in clear, crisp high-definition. Skype is a feature on some set models, and now that Skype's under Microsoft ownership, look for a push for cable/satellite distribution. Same with set-top maker Cisco Systems, whose Umi "home telepresence" was an expensive dud. Create a groundswell among consumers for this kind of service next year, and we could be witnessing a birth of a new TV medium-within-the medium, possibilities limitless.

Video-on-demand's spotlight time has arrived. In quiet fashion, VOD will surpass 10 billion, that's billion, views this year. Look for another threshold to come: national advertising sales among on-demand's 50-million-plus households, due to adoption of dynamic technologies from the likes of Canoe Ventures. If YouTube finally takes the VOD plunge, this TV domain will flourish even further. And stay tuned for more ambitious on-demand/interactive projects like AmberWatch TV, running on Cablevision Systems' NYC area platform.

The next generation of TV, a far more diverse generation of TV, will reach us quicker and benefit us all quicker if the venture capital, angel investor and incubator/accelerator communities step up and invest. The lack of participation by these communities, and their apathetic posture of TV despite the trends in play, is a national disgrace. It's way overdue for some action, big action, among VCs, angels and the incubator crowds. It's also way overdue for the TV industry to take bold steps reaching out to these communities, showcase what's happening in an ongoing way, and showcase TV investments as a job producer. The establishment of Eureka Park at International CES next month, with some TV ventures involved, is a promising step. Next December, let's look back and see many more taken.

Thank you for checking out this column all year long. Thank you for all the constructive feedback, and thanks to Jack Myers, Shelly Palmer, and their co-workers, for bringing what I write to you week after week. Also, thanks to all of you catching my Tomorrow Will Be TelevisedInternet radio program and podcasts.

May 2012 bring you more the best TV can offer than the worst, far more. Have a sensational year ahead that rewards you personally and professionally. Until 2012, stay well and stay tuned!