The Hank Aaron: Chasing the Dream Mystery. Where Can This Award-Winning Anti-Racism Biography Be Watched (Legally)? 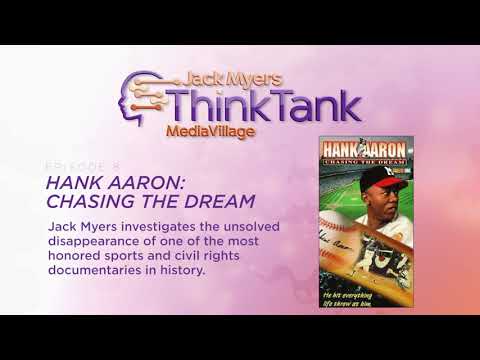 In 1995, Hank Aaron: Chasing the Dream, a 95-minute documentary won the Peabody Award and was nominated for both an Oscar and Emmy Award as Best Documentary. It won the Crystal Heart Award, the top honor, at the Heartland Film Festival. Hank Aaron: Chasing the Dreamis one of the best and most honored sports documentaries in film history. Yet the original has been buried since its original VHS release and nowhere is this story of Hank's extraordinary role in racial justice and civil rights available to be seen to honor his passing. There are seven (probably none after today) used VHS copies available at Amazon, but the film was never converted to DVD and is not available on any streaming platform. The mystery is why?

Hank Aaron had advocated for wide distribution of the film but since rights were owned by the company that employed him, Turner Broadcasting, he was unwilling to vocally advocate for further release. Co-producer Denzel Washington's Mundy Lane Entertainment was a minority rights owner and did not pursue further distribution. The film was the first for Brian Robbins and Mike Tollin, both of whom have had stellar TV and film careers. Robbins founded and sold AwesomenessTV, which today is owned by ViacomCBS. And 25% of the film's rights were retained by Television Production Partners. And that's where I enter the story, but more on that later in this column.

The IMDB review of Hank Aaron: Chasing the Dream reinforces why the film's original tape should be found, digitally updated and re-released.

"A truly remarkable movie, Hank Aaron: Chasing the Dream is a must watch for any fan of the game of baseball. Has fantastically great footage of the greatest home run hitter of all time. The way he launches the ball off his bat, the 400 foot line drives, the impeccable swing...truly one of a kind. From the game he played in his youth, "fireball," to his record-breaking home run on April 8, 1974, Hank Aaron the man reveals all in Hank Aaron: Chasing the Dream."

In the documentary, Hank talks lovingly about his Mom and tells a story few know. All those who followed the Hank Aaron story have embedded in their "greatest moments in sports" memory, the vision of Hank rounding second base in his home run trot after hitting #715 to pass The Babe's lifetime record, with two teenage fans running behind him and clapping him on the shoulder. The mental replay continues as Hank's Mom, charging the field along with hundreds of fans, grasps her son sweeping her arms around him in a full-body embrace. All sports fan know the scene, but Hank's memory was very different. As he shared for the first time in Chasing the Dream, Hank thought the two young fans were coming to kill him and pushed them defensively away. Hank's mom, also believing a sniper in the stands would be shooting at her son, embraced him so that she would take the bullet. Hank was, simultaneously a hero to most, but a hated symbol of Black accomplishment to a subset of Americans whose vitriol remains all-too present in American life today. In 1974, once it was clear that Hank would break Babe Ruth's legendary home run record, Hank also set a Guinness World Record for most hate letters received by a private citizen in a single year. Aaron received nearly a million hate letters and death threats, nearly 3,000 per day, most racially motivated.

Discovering the rights and original tape has remained an unfulfilled mission for me. Over the past two decades I've sought answers from TBS and have never fully been told why the true story of one of baseball's most iconic legends and certainly the best and most honored biography remains hidden away, probably in an archive in Atlanta. It's an asset I doubt anyone at AT&T realizes they own – until now. 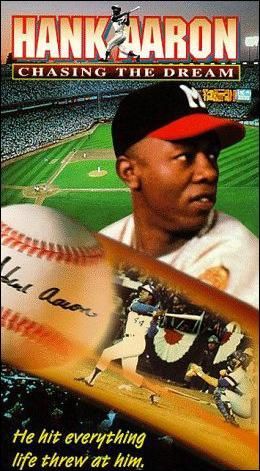 I had the honor of spending time with Hank during the production of Chasing the Dream. My then-partner in Television Production Partners (TPP), David Houle and I raised funds for the film from General Motors, Anheuser Busch, Clorox and Reebok. Tollin and Robbins had introduced the project to Denzel Washington's production firm, then headed by Debra Martin Chase (now CEO of Martin Chase Productions). Together, they brought the film to Turner Broadcasting Entertainment President Scott Sassa and President of TBS Documentaries Pat Mitchell. Since Aaron had been hired by Turner in his post-baseball career, Sassa and Mitchell believed outside funding was important and brought in TPP to executive produce and raise 100% of the required production budget, which was in the low seven figures.

Houle and I had formed TPP three years earlier in partnership with ten leading marketers to study, develop and invest in alternative network TV advertising financial models that would better serve marketers' long-term economic goals. With a multi-million dollar investment fund from the marketers, TPP was able to quickly align the funds through creative economic modeling developed in collaboration with then Turner Sports' EVP Sales Randy Freer. (The TPP model remains relevant today and is being studied by leading global brand marketers.) All of us knew the film was (and remains) a documentary masterpiece. Pat Mitchell had the wisdom to submit the film for several awards and to four-wall a pre-TV theatrical release (four-walling was a detour around Film Academy rules that prohibited TV films from Oscar consideration.)

Pat joined Hank at the 1996 Academy Awards. As she remembers, Hank was certain he would win. After all, he was carrying his lucky rabbit's foot. Pat encouraged Hank to keep his expectations low. After all, I thought at the time, in most years Hank's civil rights and human story would be an automatic win. But the competition, Ann Frank Remembered narrated by Kenneth Branagh, was a sure bet to win and it did. But Hank's extraordinary life story, well told, went on to become one of the most awarded sports documentaries in history.

Where is the film today? Who holds the rights? As a 25% rights holder, Houle and I pursued the full rights a few years ago through senior Turner executives, who referred us to attorneys, who failed to respond to repeated inquiries. I've been told there were issues with music rights, which seems like a small challenge to overcome. I was told there were issues with Hank's employment at Turner. I can't imagine that would have been an obstacle. I've also considered that there were too many rights holders and therefore it's in no one's self-interest to further invest or attempt to untangle. Lt's untangle them in Hank's honor.

If anyone has any insights into this mystery, please advise me. If no one objects, I have a clean VHS tape and can make it available to HBO Max. Those who have seen me on a Zoom or in my Leadership Conversations and Legends & Leaders videos will have seen the Hank Aaron: Chasing the Dream poster over my shoulder, signed by Hank. I'm very proud to have been associated with the creation of this brilliant and relevant biography. The least we can do for Hank is to assure his favorite biography continues to be seen.