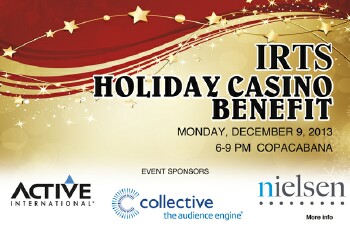 When legacy and digital media companies gather on the evening of December 9th to enjoy good food, drink and casino games at the IRTS Holiday Benefit, they will be participating in a long-time tradition that has changed in style, but remained true to its mission of supporting the IRTS educational programs and diversity initiatives.

When legacy and digital media companies gather on the evening of December 9th to enjoy good food, drink and casino games at the IRTS Holiday Benefit, they will be participating in a long-time tradition that has changed in style, but remained true to its mission of supporting the IRTS educational programs and diversity initiatives.

Established back in the 1950’s, the event once featured an annual lunchtime concert, but as business grew more complex and time-consuming, it evolved into the casino format where you mingle throughout the evening to make the most of your time without having to ever sit down for a presentation.

Former IRTS Board Chairman Tom Kane explains, “Today it is harder than it used to be for sellers to get meetings with buyers and clients, let alone entertain them during the year. The Benefit provides the perfect opportunity to entertain clients, while also investing in a charity that helps our industry as a whole.”

A long-time champion of the event throughout his years at both ABC and then CBS, where he was head of the station group, Tom would always make attendance at the Benefit a top priority for his team with the firm belief that we all have a responsibility to “give back” to our business.

Media buyers and sellers have been especially faithful to the event, and first-time attendees sometimes brush up against the Spirit of Holiday Benefits Past somewhere between hands of Black Jack and a roll of the dice at the Craps table.

You know the Spirit of Holiday Benefits Past is leading a walk down memory lane if you hear:

“Remember the Benefit where Sam Champion of ABC played Ryan Seacrest in “IRTS Idol” and Connie Chung, who had just left CNN, won the contest with an Evita-like rendition of “Don’t Cry for Me Maury Povich?”

“Then there was the time Frankie Valli –the real Jersey Boy—did a come-back concert where the audience tied all their napkins together to connect as one big family. Hey, there’s Frank Cammarata of Media Monitors. He produced that amazing concert when he was at CBS!”

“Were you there the year a hypnotist put everyone’s favorite buyers into a trance?”

“Remember when Debbie Richman was at OMD, Larry Blasius was at Magna and Mel Berning was at MediaVest before they moved over to the sell side? They sang “When You’re Good to…Buyers” in the style of Queen Latifah from the movie ‘Chicago.’

“But let’s not forget John Watkins of ABC National Television Sales and Scott Herman of CBS Radio leading sellers in a rendition of ‘Who Will Buy?’ from Oliver. The words were changed to include all of the tough sells in the programming season.”

“And what about those annual cameos by Karl Wexler of WCBS-TV, who would open for an act such as The Temptations, Kool and the Gang, or Blood, Sweat & Tears by pretending to be Elvis, Mick Jagger or Robert Palmer?”

At IRTS, we will always value the memories of the past as we guide the up-and-coming generation of professionals into an exciting future. We are grateful that many digital companies have adopted this annual tradition alongside companies that have been attending for years.

All of us at IRTS are proud to lead the charge in Building Future Media Leaders. Please call me at 212-867-6650, ext. 11 to order your tickets to the IRTS Holiday Casino Benefit on December 9th at The Copacabana. Priced at $275 each ($150 is a charitable deduction), advance purchase is required.

Warmest greetings of the season, and thanks to all who have long been involved in IRTS!

Joyce Tudryn is President & CEO of the IRTS Foundation. 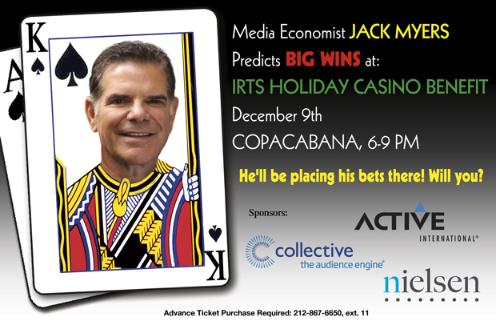 Joyce Tudryn is President & CEO of the IRTS Foundation.