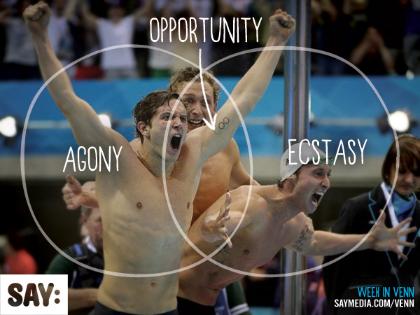 The 2012 Olympics are here - and by the time you read this, it should be fairly obvious who many of the winners are. For the athletes, it will come down to going for gold. For brand sponsors, success will be measured in reach and recall metrics. And for the International Olympic Committee success is having as few embarrassing glitches go public as possible.

But there are plenty of losers this year too – and we're not talking about the human rights case of everyone at the Olympic Park having to drink Coke instead of Pepsi. We are witnessing a collective and massive missed opportunity in advertising this year as nothing about the games is left to chance.

By giving some brands a temporary monopoly, Olympic organizers have killed the Darwinian energy that compels advertisers to outdo their competitors, because there are none. And no competitors means no reactive strategies, no guerrilla tactics, and worst of all, no creative spontaneity. Every sponsor at the Olympics is guaranteed success metrics, but they're robbing themselves of those "YES!" moments that galvanize the next steps of creative thinking.

Case in point: A recent Specsavers campaign captured the essence of quick thinking perfectly. Inspired by the highly publicized gaffe early at the Olympics that saw the South Korean flag displayed alongside pictures of the North Korean football team, Specsavers was able to apply its long-running "Should have gone to Specsavers" slogan to the situation. Specsavers quickly gained capital on the amusing story, and planted itself squarely on the Olympic news agenda (without violating the IOC's draconian regulations). Could they have planned that ahead of the Games? Not in a million years. All that Specsavers and its copywriters could do was keep an eye out for the opportunity, and seize it when it arrived.

Will future Olympic organizers have the foresight to loosen their grip on ultra-planning? Probably not, but that just means that marketers have to live a little, experiment, and surprise themselves in the four years between each Games.