The Outlook for Alphabet and Amazon: 4Q's Short Shadow, Crypto's Long One 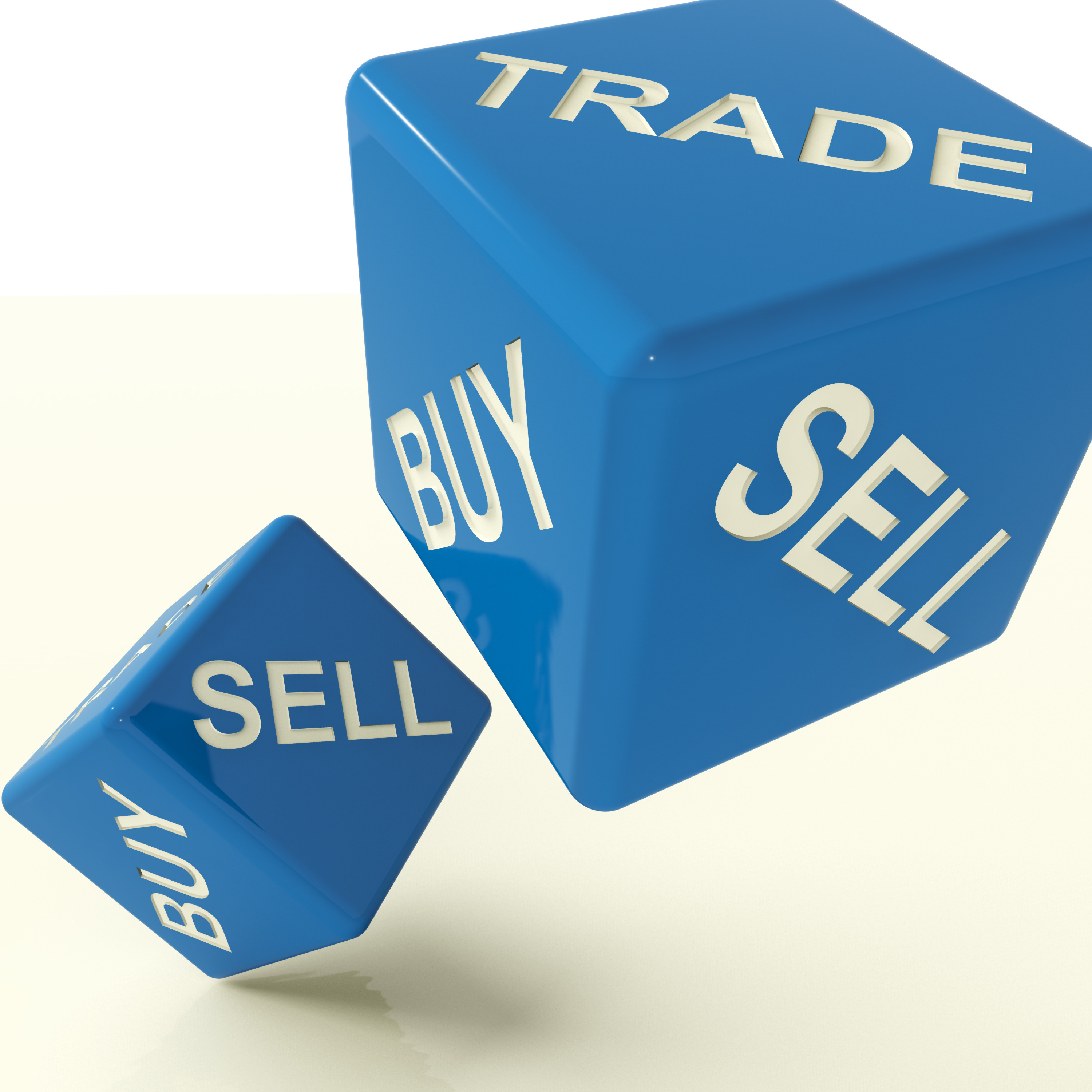 We all suffer from attentional bias-- let'ssee whether we can put mine to work for you. We have to pay attention to something, and the very fact of doing so elevates the importance of the object of our attention, often above what reason would dictate. Let's look at the 4Q results and then stir the pot on the outlook for these two FANG stalwarts with a bias inextricably linked to the attention I've devoted to blockchain technology and cryptocurrencies for much of the past year.

AMZN shares have outperformed GOOGL shares over the past year, and the reaction after 4Q results continued this trend. Since 1/1/17, AMZN shares are up 91% and GOOGL shares are up 41%; on Friday, after the companies reported 4Q results on Thursday after market close, AMZN shares were up 3%, adding almost $20bn in market cap, while GOOGL shares dropped 5%, chipping over $40bn from Alphabet's market cap. Bright spots in 4Q for AMZN included 1) its advertising business, contained in its other net sales and thus likely up ~60% year/year, and 2) its operating margin, reflecting upside surprise in scaling efficiencies in the holiday quarter. Operationally, the main concern for GOOGL was the continuation of the negative surprises in its operating profit margin, owing in particular to higher traffic acquisition costs (TAC) for its core advertising business.

I've predicted problems for GOOGL in the past, and some have shown up and others haven't -- TAC's pressure on profitability I called right.Last February, the title of one of my reports on GOOGL said it all: "A Closer Look Reveals Sites TAC Pressures Could Be Worse Than Expected." A year ago, Wall Street expected Sites TAC % -- namely, the TAC for Google Sites (primarily Google search and YouTube) as a share of Google Sites ad revenue -- to tick up by about 1 percentage point over the course of 2017. I thought it would go up by more than twice that. The actual increase was even greater. It is valuable to look as well at the change in Sites TAC as a share of the change in revenue ("Sites new TAC %"), which measures the share of Sites revenue growth going to Sites TAC and can be a leading indicator for Sites TAC %. I expected Sites new TAC % to keep climbing in 2017, and had the 4Q17 figure about right. Wall Street actually expected Sites new TAC % to shrink in 2017. 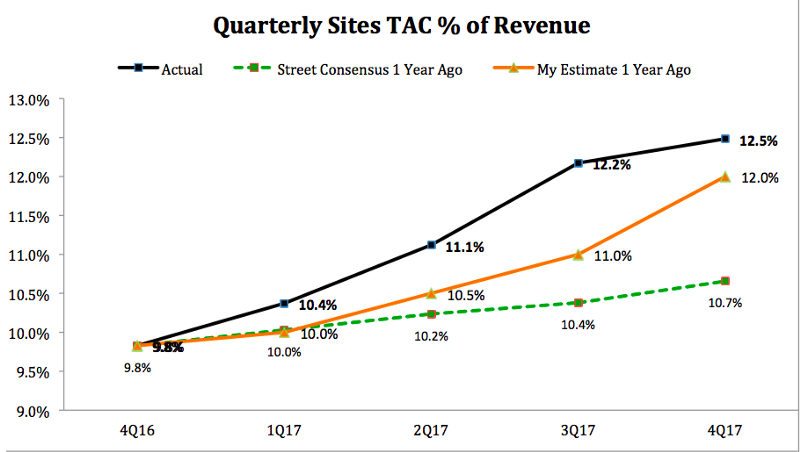 TAC as % of GOOGL's Ad Revenue Has Been a Negative Surprise 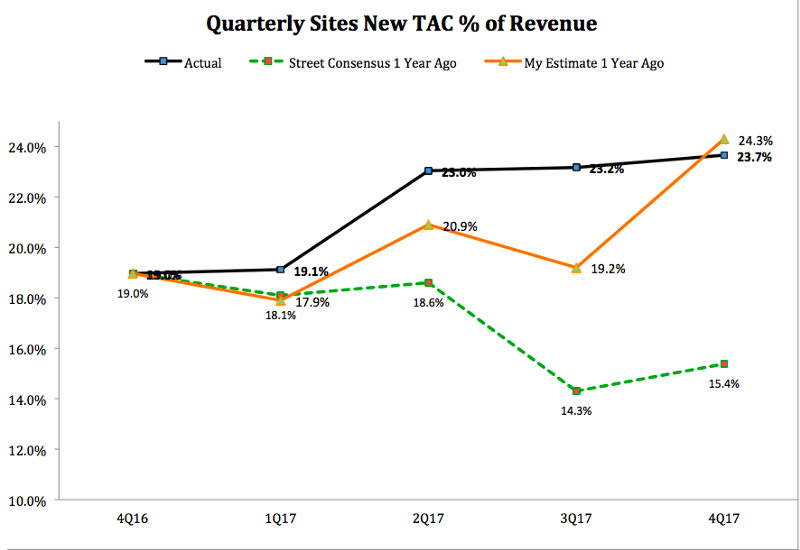 The share of GOOGL's ad spending going to distributors will continue to rise, reflecting changes in search's valuation proposition. GOOGL has near-term visibility into Sites TAC % based on its distribution agreements, which are usually multi-year. This gave GOOGL management the confidence on its 4Q earnings call to guide to a slower pace of growth in Sites TAC % after 1Q18. The rise in Sites TAC % reflects changes in the leverage of GOOGL's search engine with its distributors. GOOGL has a commanding share of search traffic, even higher on mobile than on desktop. For example, according to Merkle, GOOGL's 4Q share of U.S. search traffic was 92% overall, and 96% on mobile. Nevertheless, this dominant position has not stopped the rise in Sites TAC %, which suggests potential for longer-term pressures on profitability, which we now address.

Standing on the shoulders of insight into TAC and looking through a lens biased by attention to blockchain technology and cryptocurrencies, let's make another prediction, more long-term: tokenization will be more of a threat to the economics of GOOGL's business than AMZN's. Three reasons stand behind this view: 1) the sea change in media monetization which crypto could represent, 2) blockchain's greater potential to disrupt less bundled consumer experiences, and 3) the greater lure to crypto projects from industries with higher margins.

As to the first reason, one promise of tokenization is commodifying unpriced externalities, which are more apparent in the use of consumer data in marketing and advertising than in consumers' purchases of products, services and subscriptions in e-commerce.Cryptocurrencies present a sea change for media monetization models, and a major thesis behind many blockchain projects is the commodification of consumer data. The market cap of the tokens of just a sampling of the blockchains pledging transfers of value to consumers for use of their data is ~$4 billion. A growing number of projects focused on creating markets in consumer data is in the ICO pipeline. Thus, while TAC now only goes to distributors, crypto TAC could go both to distributors and consumers themselves.

GOOGL is still an advertising company. GOOGL has launched and poured investment into an array of non-advertising products and services (cloud services, Google Play, Pixel phones, Google Home devices, and YouTube subscription services, to name a few), and yet this has only nudged advertising's share of GOOGL's revenue down to 86% in 2017 from 92% in 2013. Moreover, the profitability of the new non-advertising-based initiatives is lower than that of GOOGL's advertising business. Thus, even now, GOOGL's mix of profits from advertising, although not disclosed, is probably well nigh 100%.

On to the second reason for our prediction: the more a service depends on integration of multiple features and offerings into a compelling user experience, the more difficult it is to decentralize through crypto.AMZN offers a bundle of services that is relatively less susceptible to decentralization. Amazon has an easy ordering interface, data on customer purchases, associated product recommendations integrated with product availability, low-cost shipping (free for Prime members), a massive fulfillment and shipping infrastructure, which is increasingly supported by Amazon's own transport infrastructure, and, in the case of groceries at least, its own brick & mortar retail distribution. And oh yes, Amazon Prime bundles all this with an SVOD offering rivaled only by Netflix. By contrast, GOOGL's paid search ads stand somewhat separately from the organic search interface. Consumers, advertisers and investors have all been tracking the continuing encroachment of ads on the search engine results page. The growth of sponsored ads on Amazon's e-commerce platform is itself a sign of the portability of the paid search ad experience.

Let's close with reason three: the greater the margins of a centralized service, the greater the opportunity for disruption by decentralized services. Advertising generally is a higher-margin business than e-commerce. AMZN's operating margins were 3.5% in 4Q and 1.0% in 2017, while GOOGL's were 23.7% in 4Q and 23.6% in 2017. Thus, from tokenization, GOOGL's margins are ultimately more at risk.