The Power of Contextual Relevance: Is This Ad Speaking to Me? 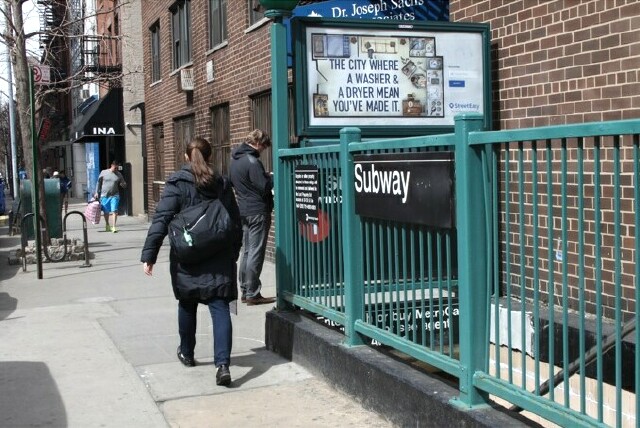 Native advertising has been one of the most consistent trends in digital over the past few years.  Why, you ask? Because an ad that seamlessly blends in with the content it is featured alongside feels less intrusive, and when done well can even enrapt its target audience.

The Skimm, a daily newsletter targeting Millennial women, is one such example.  Playing on the same wit as the publication’s articles, the editors position their ad partners’ products as essential to their readers (and boy do they know them well!).  They’ve done so with sponsored wine, which they suggested was perfectly paired with a cozy night in reading that trending book.  Another was sneaking in a coffee special as the pick-me-up you need after a long night watching the Oscars.  These instances go to show the power of brilliant ad placement.

Considered one of the oldest and most established location-based mediums, out-of-home (OOH) advertising can exist without “traditional” content. Its environment instead fills a larger role and could itself be considered a part of the content.  Similar to native advertising online, when an OOH ad is contextually relevant and relates to its space it is better received -- from the moment the audience becomes aware of it to recall standpoint later on.

Contextual relevance and location at one point simply meant proximity for OOH advertisers.  Now they mean so much more.  For example, picture the copy for a hypothetical McDonald's outdoor campaign featuring the words "Next Exit for a Big Mac.”  There is nothing inherently wrong with this type of billboard alerting drivers of the next food stop, an arguably useful tool.  (Be honest, how many times have you pulled off the highway for that juicy burger?)  Today, however, your location can be extremely important to advertisers -- because where you are, where you’ve been and where you’re going can say a lot about who you are, if properly measured. With the ubiquity of smartphones, behavioral audience segments are defined more than ever by these very parameters, observed alongside existing demographic attributes. The smartest brands are catching on and ensuring that their ad creative not only speaks to the location it’s pictured in, but also aligns with the mindset and lifestyle of those in the area.

The first step in addressing an audience based on their location is to look at the city or region the ad will be put up in.  Verizon does an impressive job of executing this on a large scale, purchasing national campaigns but adjusting their copy slightly to speak to each city; for example, calling out San Francisco or even the dreaded Lincoln Tunnel traffic.  Similarly, Häagen-Dazs juxtaposed one of its key value propositions in Los Angeles stating: “It’s The City of Angels, Not Additives.”

Snapple’s strongest sales were in New York, which prompted a subway campaign to empower New Yorkers to be spokespeople for Snapple Love for the rest of the country.  This demonstrates that the original physical location can be the bridge between an ad and a conversation in the social sphere as its reach spreads.

Another level of contextual relevance in an outdoor space directly relates to the mindset of the audience standing in front of the ad.  In my opinion, no one has done this better than StreetEasy did during their first-ever advertising campaign.  Their series of OOH ads spoke directly to the ridiculous reality of shoebox-sized apartments we New Yorkers call home, with copy lines like, “Sure your window faces a brick wall, but behind that wall is NYC” or “500 sq. feet in NYC is bigger than 500 sq. feet anywhere else” or “The city where a washer and dryer mean you’ve made it.”  That last one (pictured at top) is my personal favorite.  Fingers crossed I get there one day.  These advertisements were such a hit they actually became works of art, with many New Yorkers clamoring for the billboards to find a home in their very own tiny apartments.

When it comes to digital OOH, Spotify successfully elevates the medium to another level by leveraging the internal data collected to create OOH creative that reflects its listeners’ music choices in specific locations.  For example, one of their ads in Times Square asks: “Dear person in the theater district who listened to the Hamilton soundtrack 5,376 times this year, can you get us tickets?” Or: “Sorry, not sorry, Williamsburg, Bieber trended highest in this zip code.”  I bet the hipsters hated seeing that one.

Outfront Media’s own Liveboard execution with JetBlue in Times Square truly embodies the potential and future of digital OOH, and maintains Outfront as a major leader in the industry.  By effectively marrying two sets of data -- the Google Maps API and its own flight tracking data -- JetBlue was able to deliver real-time calculations on how long it would take to get from that exact location to their advertised destination -- down to the second!  This campaign succeeded in creating a unique, real-time happening for the audience that experienced it, and it was considered impressive and memorable -- which was reflected in the huge ROI.  In JetBlue’s words, the campaign “accomplished the impossible. It got New Yorkers to stop and look up.”

We know that location has effectively infiltrated every media format we see on the market today.  With new sets of data collected and distributed every day, my hope is for advertisers to capitalize on said stats and produce ads that genuinely speakto their target audience.

One thing is certain: There is power in producing ad creative that is contextually relevant.  Do it right and you might just get your target audience to think, “Is that ad speaking to me?”

Disclaimer:Website references included in this article have been provided as a convenience, and the information contained on such websites is not incorporated by reference into this article.

As Senior Director, Marketing at OUTFRONT Media, Elizabeth Rave oversees the implementation of national initiatives and regional strategy across a marketing team of 40+. Rave is also involved in the evolution and promotion of the OUTFRONT brand within the ma…