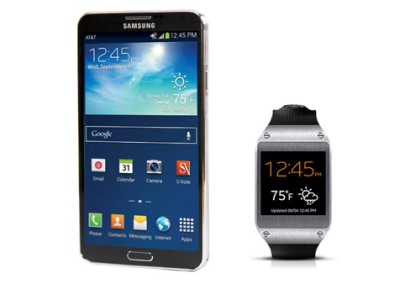 The Future is in Wearables

This past week, my friends at AT&T sent me a Galaxy Gear to test. First of all, it pairs with a smartphone… as long as you have the Samsung Galaxy Note 3 (and we'll get to that phone later). Samsung has promised that interaction with the Galaxy S4 is coming soon, with other devices following in the future.

You can do lots of things on Galaxy Gear such as notifications from the Note and there are Galaxy Gear adapted screens for many of your favorite apps. To receive a call or doing almost anything with respect to the phone, you don't have to take the phone out of your pocket – convenience is where the Galaxy Gear shines. Having a phone with a killer 5.7-inch screen is awesome… unless you have to keep pulling it out of your pocket to check it. The Galaxy Gear eliminates most of that need. 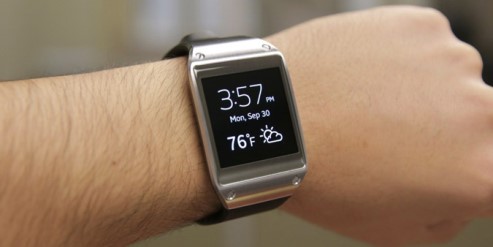 With the Galaxy Gear, you can just go and find your apps, you can do a voice memo, and you can look at your gallery of pictures. The Galaxy Gear has nice big icons, as you can tell from the photo above. You can control all of your phone's media and even change the settings for both your watch and your phone through the Gear.

The part that people like the most about the watch is the built-in camera. It's as easy to use as tapping the screen to take a picture. It makes a pretty loud camera sound, which is okay because I can imagine people walking around, going tap-tap-tap-tap-tap, and secretly taking pictures of everyone they see. The camera noise keeps users (relatively) honest. 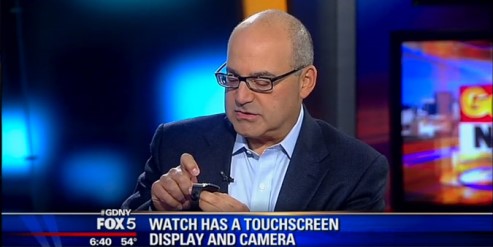 Is the Galaxy Gear awesome? Yes … but again, you have to also have the Galaxy Note III. Today the device is useless with any other phone. If you have another Android device and you're looking for a smartwatch to use now, Sony just launched its Smartwatch 2 (and it's priced $100 less than the Galaxy Gear). I haven't tested it, but it'll give you interactivity with your non-Note 3 Android phone.

In addition to getting to try out the Galaxy Gear, I got to test Galaxy Note 3 units from both Verizon and AT&T. Available in black and white, they're slightly different; the phones have different software available from each carrier. Some people like the Verizon software, others like the AT&T software. It's all Android 4.3, which is the latest build of Android ( for now). But the most remarkable aspect of the phone is its screen size.

I've talked before about how my Samsung Galaxy S4's screen dwarfs the screen of the iPhone 5 and 5s. But check out what the Note 3 does to the S4. Look at the size of the screen differential. It's not even close: 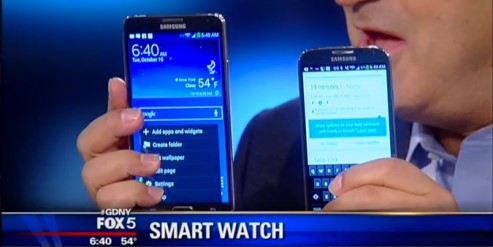 Even though my Samsung S4 is still considered huge, on a screen-size basis, it's nowhere near the size of this. The Samsung Note 3 is a big device. If you think that's bad, take a look at how tiny the Galaxy Note III makes the iPhone 5 look: 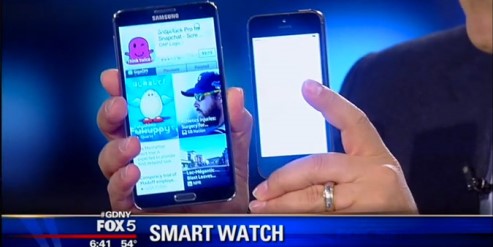 The Note 3 raises two important questions: First, do you need to have a tablet if you've got a phone the size of the Note 3? That question is answered very, very simply: No, you don't.

And that plays into the second question: Is it too big? I don't think it's too big for a whole bunch of reasons. Most importantly, the web experience on a device this size is fantastic. Also, here's my Kindle app, running on the Note 3: 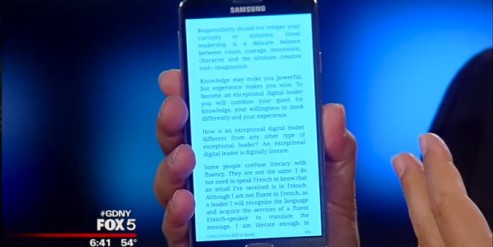 This is absolutely big enough to read in a very comfortable way. I can leave the type alone – I don't have to make the type really large. As Fox 5's Kerry Drew pointed out when I showed off these gadgets on Good Day Wake Up last week, the Note 3 is almost the size of a book. It's just a tad smaller than the size of a pocket book.

Your enjoyment of the Note 3 comes down to how willing you are to carry around a phone this size. If you're like me and carry your phone around in your breast pocket most of the time, it fits perfectly and isn't a burden. The fun part of carrying it like that... the phone becomes a pocket square for the 21st Century.

When I carry the Note 3 in my jeans, I don't mind it. But if I'm carrying it while wearing dress pants, it's a bit of a nuisance – it's banging around a lot.

There are many benefits to a phone this size. You'll probably use a headset with it. (Side note: I use a wired headset for almost all the calls I make. I don't do that because I don't like talking on the phone, but because I don't want to walk around, holding the phone up to my ear for half an hour while on a conference call.) If you're going to use a headset, it doesn't matter how big this phone is.

Most importantly, if you're going to use a device like the Galaxy Gear, where all the notifications and most important stuff are going to happen on your wrist, the Note 3 can stay in your pocket or your briefcase or your purse, until you have to take it out and use that sized screen.

I could write another article on the benefits and features of the stylus that comes with the Note 3. It is awesome. From handwriting recognition to drawing to just poking around on the Note 3, there is something wonderful about having an 21st century version of a centuries old writing instrument.

Final Thoughts: What Will These Devices Replace?

1. We have more ways to interact with our devices than ever before, and

2. Phones are getting bigger than ever.

With each device priced at $299, neither is a device that many people can go out and buy on a whim. But the Note 3 is remarkable in that it effectively replaces two devices for the price of one. I haven't been shy about how muchI loveApple's iPad mini. But am I carrying a 7" tablet when I have a 5.7" phone in my pocket? Absolutely not! A phone like the Note 3, with its massive screen size, renders the smaller form factor tablets obsolete. It gives you everything you want and need out of a phone, as well as the bigger screen benefits you'd normally get from a tablet.

The Galaxy Gear, on the other hand, is more of a luxury item than anything else right now. Like I said, it can currently only pair with the Note 3, which means it's pointless for most people right now. As it begins to add connectivity with other devices, it'll become more relevant. But its limited pairing, coupled with its $299 price point makes the Galaxy Gear a nice-but-definitely-not-needed gadget.