The Ugliness of Journalists Celebrating the Deaths of American Politicians 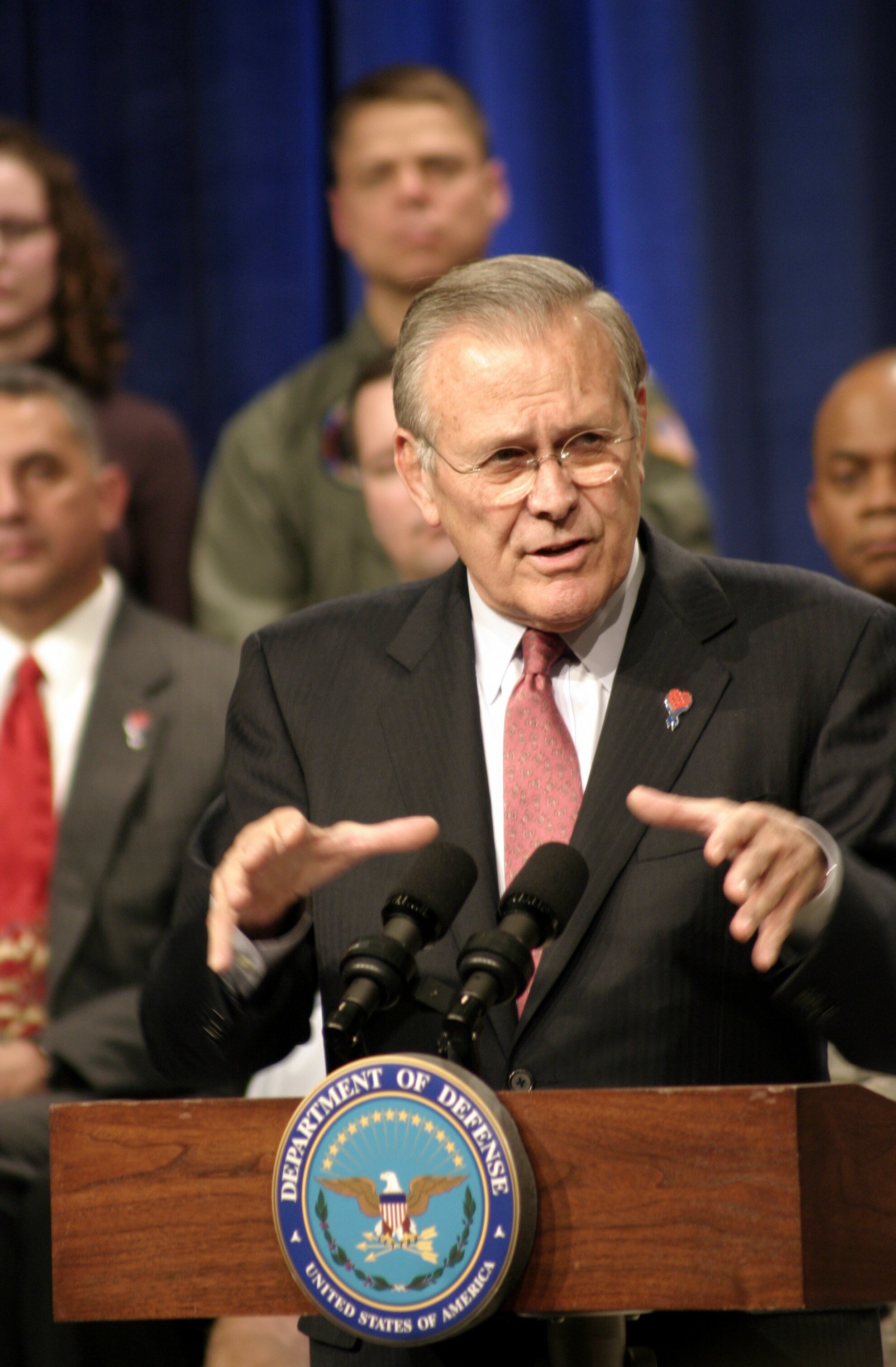 On the afternoon of June 30th, the family of Donald Rumsfeld issued a statement acknowledging the death of the former Secretary of Defense and White House Chief of Staff. The statement, in part, read: "History may remember him for his extraordinary accomplishments over six decades of public service, but for those who knew him best and whose lives were forever changed as a result, we will remember his unwavering love for his wife Joyce, his family and friends, and the integrity he brought to a life dedicated to country." It only took a matter of minutes for journalists to begin chiming in and, in many cases, doing nothing short of celebrating.

Gabriella Paiella, a staff writer at GQ, posted a meme of a smiling woman, captioned "Thinking about Donald Rumsfeld in hell." She would be joined by Aída Chávez, The Nation's D.C. correspondent, who replied to Rumsfeld's family's statement with "Bye B—h." The German journalist Tilo Jung would also weigh in: "Rot in Hell #Rumsfeld." And these were just a few of the countless celebratory posts that graced social media in the immediate aftermath of Rumsfeld's death being announced -- not to mention the accompanying vandalism of his Wikipedia page. Unfortunately, this outpouring of internet glee is hardly surprising, with it having also taken place following the deaths of a number of political and media figures in recent years. But even in our current age of gracelessness, celebrating a person's death is still startlingly low, and it is especially beneath those in the press. Modern journalists, even if they rarely live up to this ideal, are supposed to be covering our political figures objectively and, just as importantly, relatively dispassionately.

To be clear, one would be well within his rights to criticize Rumsfeld, particularly for certain decisions he made during his second stint as Secretary of Defense during the administration of President George W. Bush, from 2001 to 2006. (Rumsfeld also served as President Gerald Ford's second Secretary of Defense from 1975 to 1977.) However, there is a time and place for such evaluations of a figure's place in history, and they are better left for later -- after the dust has settled and the family has had a chance to mourn in relative peace. Further, the tone of such criticisms -- when they do begin to emerge -- should keep to the facts and refrain from the sort of outbursts that littered Twitter throughout the day on June 30th.

Not all reactions to Rumsfeld's death were negative. CNN's Jake Tapper tweeted a quotation from the man himself: "When I was a Navy pilot, the rule if you're lost is to climb, conserve and confess. Get some altitude. Take a deep breath and get on the radio and say you're lost." In doing so, Tapper helped to remind us all that there was more to the man than just his stint at the Pentagon; he had, after all, been a naval aviator and flight instructor long before he entered Congress, became a confident to President Ford, or was considered for the vice presidential nomination on the 1980 Republican ticket.

President George W. Bush would also extend his condolences, recalling that despite his high rank Rumsfeld "... ran into the fire at the Pentagon to assist the wounded and ensure the safety of survivors" on the morning of September 11th. Former Secretary of State Condoleezza Rice also issued a kind remembrance. The Colorado radio host (and former FEMA head) Michael D. Brown expressed his condolences: "Donald Rumsfeld was an incredibly decent human being. While we may have disagreed on a few policy issues, he was incredibly supportive of me during the Bush Administration. I loved the man for his behind-the-scenes advice, support and mentoring. RIP, Mr. Secretary."

All of those who hold high-ranking government posts (at least for any length of time) in the United States have -- almost by definition -- mixed records; the enormous role that the United States occupies in the world always allows for charges of incorrect action or inaction. President George W. Bush deserves enormous criticism for the War in Iraq, yet, at the same time, he is nothing short of a hero in much of sub-Saharan Africa due to his administration's efforts to curb HIV in the region. The same might be said of current President Joe Biden; he might, on the one hand, be hailed for his ability to negotiate deals between the White House and Capitol Hill while Vice President and also be rightly criticized for his role in helping to bring about passage of the Iraq Resolution in 2002 when he was chair of the Senate Foreign Relations Committee.

As those who follow my writings know well, I am no fan of the foreign policy of the Bush administration and have also been deeply critical of efforts to rehabilitate the images of neoconservative figures such as Bill Kristol and David Frum during the Trump years. I also continue to view the War in Iraq as the most profound failure of American governance during the last half-century. But that is no excuse for those who also share this view to celebrate a man's death so shamelessly, particularly if they are employed as journalists tasked with level-headedly keeping the public informed.

On September 14, 2001, just three days after the deadly attacks on the World Trade Center, the Pentagon, and in Shanksville, Pennsylvania, journalism professor Robert Jensen, someone I've since come to know well, wrote a column in the Houston Chroniclearguing that, though the attacks were "reprehensible and indefensible," they were "no more despicable than the massive acts of terrorism -- the deliberate killing of civilians for political purposes -- that the U.S. government has committed during my lifetime." Again, there is a time and place to make an argument such as that one (and, to be clear, I do not share Jensen's view on this subject), but it is not in the immediate aftermath of such loss of life, while people are still so acutely mourning. In a similar vein, in the years to come, we can evaluate Rumsfeld's legacy, his role in the unfounded claim of "weapons of mass destruction," Abu Ghraib, and in so much of the needless loss of life that took place in Iraq in the early 2000s.

In the meantime, however, it is only appropriate to allow his family time to grieve in peace.