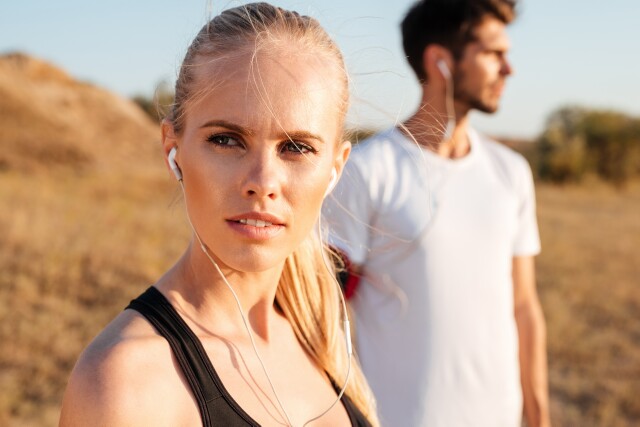 With the proliferation of devices and platforms, one might wonder which one has the greatest impact on viewership.  A recent Comparable Metrics Report by Nielsen noted that TV captures 92% of all of the viewing in the total U.S.  But the real surprise -- to some -- was the power of radio, at 93% reach.

AM/FM radio, with 228 million listeners across the U.S., still has the greatest reach of all individual mediums. That is more than No. 2-ranked Live+DVR/time shifted TV (218 million) and No. 3-ranked smartphone App+Web (203 million).  Also, radio has the highest reach among Adults 18-34 at 92% compared to TV's 79% and smartphone's 91%.

Radha Subramanyam, President of Insights, Research and Data Analytics at iHeartMedia, is one of those who are un-surprised by radio's strength. "We know radio remains the No. 1 mass reach medium in America," she noted.  "Sound is on a growth trajectory while other media are under pressure from fragmentation.  So we remind our brand and marketing partners to always ask, 'What is your Sound Strategy?'"

How Nielsen Compares All Categories of Media

When comparing the diverse range of media platforms and offerings, Nielsen must align the methodologies and metrics so as to display an "apples to apples" view of consumption across TV, radio, TV-connected devices, PCs, smartphones and tablets.  But it all boils down to three basic concepts that are the same across all categories of media measurement: how many (which is essentially average weekly reach), how often (number of days per week) and how long (both gross minutes and average minute audience). 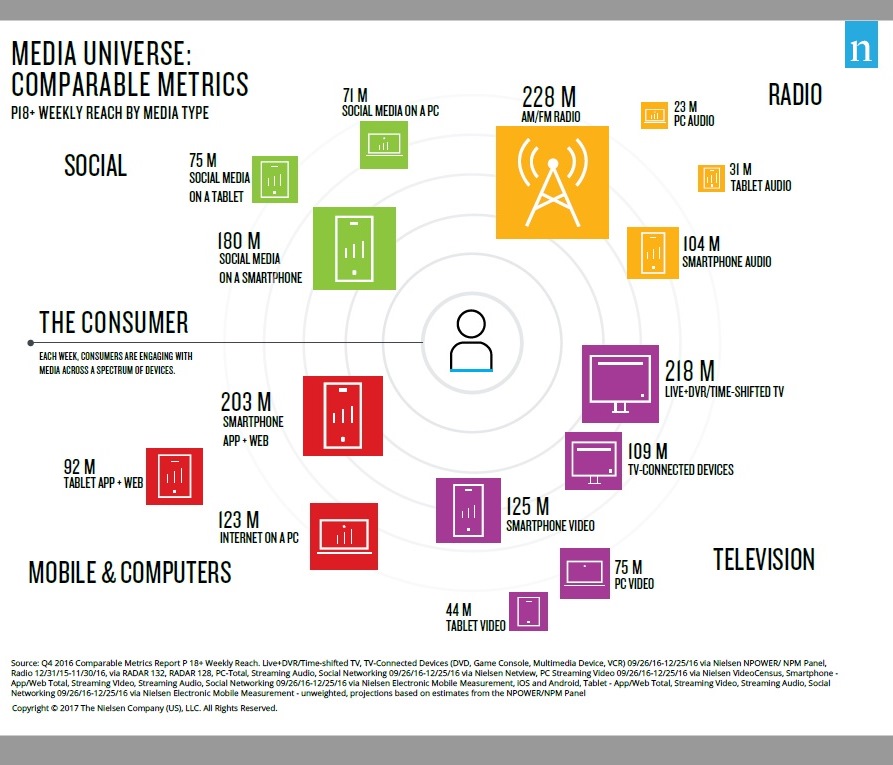 In another perhaps even more surprising advantage, Nielsen's newly released 2016 Q4 Total Audience Report shows a significant increase in Millennials listening to ... wait for it ... news radio!  Granted, news radio makes up a smaller portion of their consumption, but share among this group has actually grown in the last two years, up 24% among this demo vs 2015. News radio's growth spans all age groups, too.  Nielsen reports that Americans listened to more than 11.5 billion hours of news across portable people meter (PPM) markets last year, up from 10.5 billion in 2015.

Radio's Future According to Nielsen

Radio is projected to be resilient, young and a platform that embraces digitization and this may be surprising to some people.  "Despite all the growth in digital media, AM/FM radio is actually growing, too," said Tony Hereau, Vice President of Audience Insights at Nielsen.  The medium remains youthful.  "Looking at the 18-34 year olds, we see radio leading all media at 92% weekly reach.  It was 92% last year as well.  The trend is very consistent." In the digital world, he noted, "AM/FM radio is holding up remarkably well.  Streaming audio is growing but it is more of a replacement for your CD collection rather than your favorite radio station."

"For decades, TV has always been thought of as a reach medium while radio was considered more of a frequency medium," Hereau continued. "Over the last few years people have been realizing that radio is actually a reach medium, too.  It is not a new story.  It just became a lot more important when it could be compared against TV and smartphones."

Radio is as fresh, youthful and relevant as ever.  To many, that is no surprise.