These Women and Their Stories are Changing the World 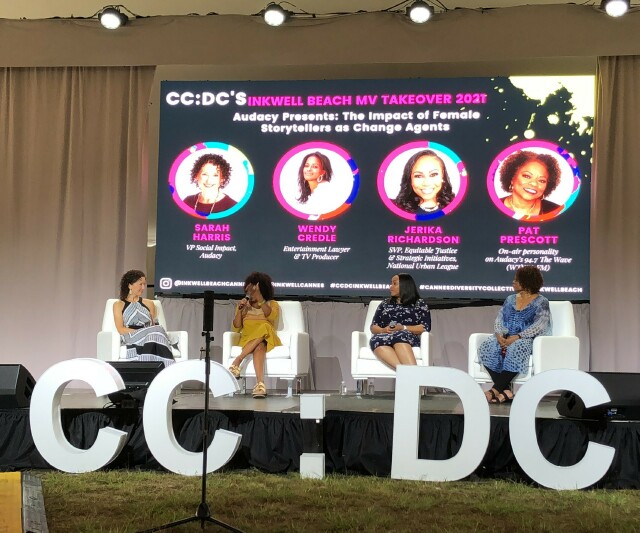 "Storytellers are a critical part of the narrative on how we create change." That's how Adrianne Smith, Senior Vice President and Senior Partner, Chief Diversity and Inclusion Officer, Fleishman Hillard, and pioneering founder of the Cannes Can: Diversity Collective (CC:DC), opened the Audacy-sponsored "Impact of Female Storytellers as Change Agents" panel discussion at the Inkwell Beach CC:DC conference in Martha's Vineyard on August 12, 2021.

The diverse panel, moderated by Sarah Harris, Audacy's Vice President of Social Impact, included three women known for bringing the most important issues of the day to light:

While these women have taken different paths, they have a shared mission: to shine a light on Black and female stories, and promote dialogue and awareness that bring about positive change.

Wendy Credle uncovers and shares stories reflecting what she describes as "the Black experience." Her current slate includes a reality series about six plus-sized Black women in a dance company and two series about young Black professionals in New York and Detroit. Although her stories are inspiring, traditional media outlets aren't always inspired to sign on. She has found that, lacking a broad understanding of the depth and breadth of experiences among Black audiences, TV executives may defer to formulaic shows that historically deliver real ratings, but that don't necessarily portray real life.

"I climb an uphill battle every time I have a new project," she said. "Because they're limited in terms of what they believe the scope of the Black experience is, they don't understand that there is another type of experience that we are dying for, thirsting for, that could thrive if they'd give us a chance."

She noted that when Black consumers support content that accurately portrays their lives, it sends a powerful message to media companies to greenlight those kinds of projects. She pointed to an inclusive Starz series, Run the World, recently renewed for a second season, as a rare example. "That's the kind of programming we need to see more of," Credle noted.

Audacy's Harris agreed. "When you see that kind of programming, connect with it, watch it and support it to [encourage] the market to create that virtuous cycle," she said. "We need them."

"If I have a microphone in front of my mouth, I need to say something that will either inform people, that will give them comfort, that will make them laugh, or that will lift their spirits," said Pat Prescott, who has been doing just that for more than two decades as a broadcaster in New York and Los Angeles. "Don't ever miss an opportunity to connect and share what you believe and what you learn."

At Audacy, Prescott is leveraging the power of audio to raise awareness for Black history and social issues. During Black History Month, she produces Making Waves, a series documenting the living history of accomplished Black Americans making notable contributions to their communities.

When Audacy looked to her after the death of George Floyd and the reemergence of the Black Lives Matter movement, Prescott launched Justice Now, an interactive series designed to start conversations around the things people are talking about, from current events and education to entertainment and housing.

"I've been able to use this platform to not only share my story, but to share other people's stories," she said. "So much needs to be addressed and understood. To be able to tell those stories, that means the world to me."

Audacy is adapting Justice Now into a podcast, a relatively easy, inexpensive and popular format offering a powerful new platform for female storytellers.

"Podcasting is creating space for more voices to be heard, and for more in-depth exploration of issues and conversations," Harris said. "Perhaps the most influential voices of our day are following their passions to tell a purposeful story."

Jerika Richardson has spent her career working in politics and even alongside law enforcement to bring awareness to important social issues and effect change. To address racial inequity in our communities, she said people must have honest conversations about the past and the present.

"It starts with telling the truth," she advised. "We can't solve the problem if we don't identify and be honest about the roots of the problem. For people to have empathy, they have to know the struggle. You have to give them the truth, but you have to tell them a story in a humane way so that they're able to be moved and spurred to action. Otherwise, we'll just be talking to ourselves."

Richardson has mastered the art of spurring folks to action, and she has found the power of storytelling to be one of the foundational secrets to her success.

"When we're talking about change, we have multiple tools at our disposal," she said. "We can legislate, we can litigate, and we can also activate, and I think the activate part is really crucial. The storytelling component has been critically important. It's really the stories that we've all been telling that create the change."