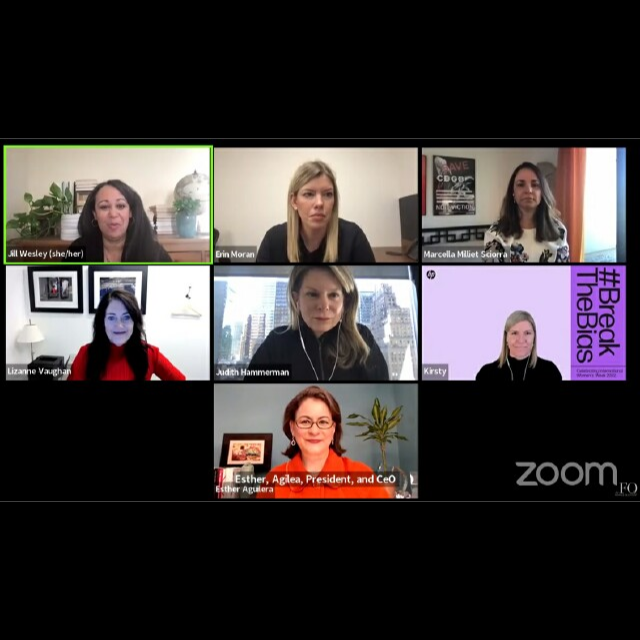 Shattering biases in the workplace requires companies to make commitments from the highest echelons of the corporate ladder, and to provide ways for staff members to speak up. That was a topic of much discussion during an International Women's Day panel session last week hosted by the Female Quotient titled "Beyond the HR Department: The Role We All Play in Breaking Bias at Work."

Companies can also benefit when minority members of their staffs help educate others about biases, said Marcella Milliet Sciorra, CMO of the healthcare advertising platform, DeepIntent. But it must be done in the right way. "There's more of a need to make a safe place for workers. It's hard for people to bring up issues, as that could mean talking about their supervisors. So, we need safe spaces and even more anonymous ways to speak up," she explained.

Sciorra also noted that this needs to go beyond just telling employees that it's okay to discuss issues related to bias. Especially in sales, some people may not dare to bring up the bad behavior of those who bring in the dollars.

There are solutions that can help avoid feelings of isolation caused by bias-related problems. Sciorra brought up the value of workplace mentorships, regardless of whether the mentor is male or female. "Some of my biggest allies were male bosses," she recalled. "Even male bosses can help break the bias."

Normalizing the workforce and workforce behavior is important to all of us, Sciorra added. For example, men should be afforded paternity leave so "we can all be available to our families."

Lizanne Vaughan, Senior Vice President, Chief People Officer at visual media giant Getty Images, stressed the need for better and more accurate data regarding gender and race. As part of that, companies need to look at data that relates to intersectionality -- a type of analysis for understanding how aspects of a person's social and political identities combine to create different modes of discrimination and privilege.But achieving the trust to do this right and break biases will take time, she added.

The session's moderator, Jill Wesley, who leads Partnerships at Female Quotient, noted that HR does such an important part in breaking through bias, but she asked the panelists to discuss how HR relates to the bigger picture.

Everyone's responsible, said American Multinational HP's Kirsty Stevenson, Senior Director, Responsible Sourcing and Human Rights. Advocacy and activism should be done in day-to-day interactions. The goal for HP, she added, is to reach 50-50 diversity in leadership by 2030.

Software giant Adobe's Head of Platform Expansion Judith Hammerman concurred that the best metric measurements are critical, but cracking bias really must start at the top, from where company culture emanates.

Getty's Vaughn offered that it's also a matter of "accountability." And management performance must also be scrutinized. A good environment for all workers, she added, also serves customers, because diversity and inclusion aren't just about employees. It can influence a company's marketing strategy worldwide. "It's also a matter of who's behind the lens and in front of it," she said.

Esther Aguilera, President and CEO of the Latino Corporate Directors Association, discussed a mentee -- a Harvard MBA student who called a hotline anonymously about a problem. She was given a sense that something was being done. Aguilera encouraged more one-on-one conversations about biases and getting more people to speak up.

HP's Stevenson reminded the attendees that it's important to try to take actionable steps so that problems don't go unaddressed. This can take the form of more honest, impactful conversations with peers or calling a hotline.

Seconding this, Wesley added that speaking up and having "courageous conversations" can be tough for all of us. Some companies realize this impasse and are doing something about it.

Moran noted that Warner Music Group has initiated a way for more honest conversations to take place with the recent rollout of its global DEI (Diversity, Equality, Inclusion) Institute. Equally important, and in the spirit of "we're all in this together," she said that teams must be encouraged to step up, leverage these corporate opportunities and educate themselves.

This story was written by Doris Toumarkine.