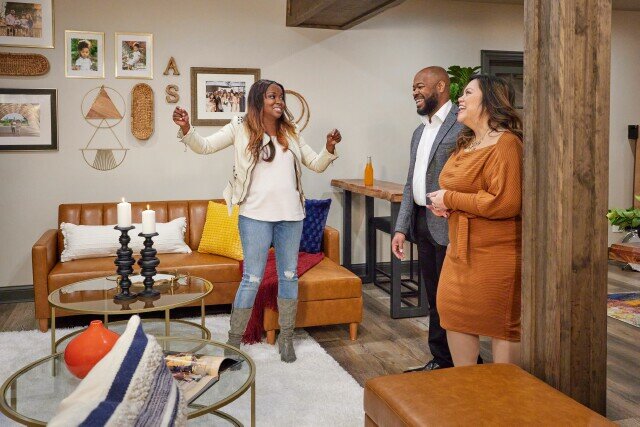 You can't buy much of a house for $50,000. However, you can make your old house new, or at least parts of it. In HGTV's 50K Three Ways, designer Tiffany Brooks surveys clients' houses, then devises three plans, all coming in at $50,000. It's a fun approach to remodeling, and Brooks is keenly aware that most people must save for years to spend that amount.

Brooks' enthusiasm and straightforward approach are apparent from the start. As she tours a house, she takes in how people live, and listens closely. That's an important quality; far too often designers impose their vision on people.

"That is what I pride myself on," Brooks (pictured top left) told MediaVillage during an exclusive interview. "Everybody asks me, 'What is your distinct style?' I don't have one. You have to listen to your clients. Listening to your clients results in happy clients which results in repeat business. You see so many designers and know, that is a such-and-such's room. I don't want that. I want there to be a definite departure in the styles of the houses I do. And I want to reflect the clients."

An interior designer based out of Chicago, where she has been working for a decade, Brooks is a familiar face to HGTV fans. She's been on Design at Your Door, Rock the Block and the HGTV Smart Home shows. The new program is also streaming on discovery+.

"Most of my clients come to me with about $50,000, which is a lot of money," she says in the series' opening. At that moment, Brooks will endear herself to viewers because she gets it. She understands that some contractors and designers deal in mythical math. Her approach is based in reality.

For those wandering from room to room, shaking their heads at their décor, not knowing where to start, Brooks offers sound advice.

"I tell people first explore your life," Brooks said. "What do you do every day? Let's think about this. What do you want your life to look like? Explore how you spend your life. Do you like to go into your kitchen and prepare the grandest meals for everybody coming in? Or do you like to go right upstairs and retreat in your bedroom? I tell people to explore how their lives progress through an average week."

While so many businesses suffered through the pandemic, home design enjoyed a boon. With people forced to stay home, many recognized their homes were not quite what they needed.

"E-design has taken off with the pandemic," Brooks noted. "In general, there are a lot of designers out there offering designer services. When you are shopping online, you might as well help them virtually. I can help people across the country. I do design. We service clients in Chicago. And, we have homeowners that are in Boston that want our design services. They don't need to pay to fly us out. They can send us the measurements, and we get to work."

The show is precisely as advertised. Brooks devises different plans for three parts of the house. Often, people have a lot of dead space; rooms they walk through but don't use. In one house, the kids' toys had taken over. Brooks came up with a way for the adults to reclaim the space while the children still had plenty of room to play. Among her smart moves is finding furniture that offers storage space. For the occasional plan the inches above $50,000, Brooks tells people upfront and still offers a couple of proposals within the set amount.

"We typically get discounts and things like that," Brooks explained. "That is their minimum buy-in. A lot of homeowners will choose to spend a little more."

Brooks brings a sense of fun to rooms, such as having a piece of art made to represent sound waves or finding a navy bathroom vanity. Nothing is too wacky. She's always had a good eye and could walk in a room and know how to improve it. Brooks recalled the first room she revamped.

"When I was 15 years old, my parents divorced," Brooks shared. "So, my dad would send me little gifts. I asked my father if he could send enough money to zhuzh up my room. It was 1995, and my dad sent me $350. It was a complete overhaul.

"I wish I had before and after pictures," she continued. "I had the wood paneling. I painted it white back in '95. We had the ceiling tiling from the '80s. I painted those meticulously. I wanted pink floral wallpaper, a pink carpet, and white walls and white ceilings. I already had the bedding I wanted."

After attending school for business, Brooks was working in high-end residential property management. When she felt burnt out, her boss gave her a new assignment, decorating one of the model apartments -- and Brooks' new career was born. When the owners saw what she had created, they loved it and entered it into a contest. Brooks made a bet with a co-worker that if she won, she would venture into design full-time.

"I took a couple of classes," she said. "My brother is a high-end residential architect. It was definitely in me. I could not afford to go to design school. After that, I bought the textbooks, and I read them. I figured it out."

When Brooks won HGTV's Design Starin 2013, "That led me to a path with a relationship with HGTV," she said. "I was with them forSmart Home, and I have been an on-air personality for eight years now. I like it. Being on-air is cool."

Delighted by recently being named to Architectural Digest's 100 List, a goal she thought was still years away, Brooks considered her future goals.

"I see product lines, furniture lines happening," she revealed. "I would like to see multiple phases of 50K Three Ways. I would love it to be a franchise and hit other cities and other countries."

50K Three Waysis telecast Mondays at 8 p.m. on HGTV. It is also available on discovery+.