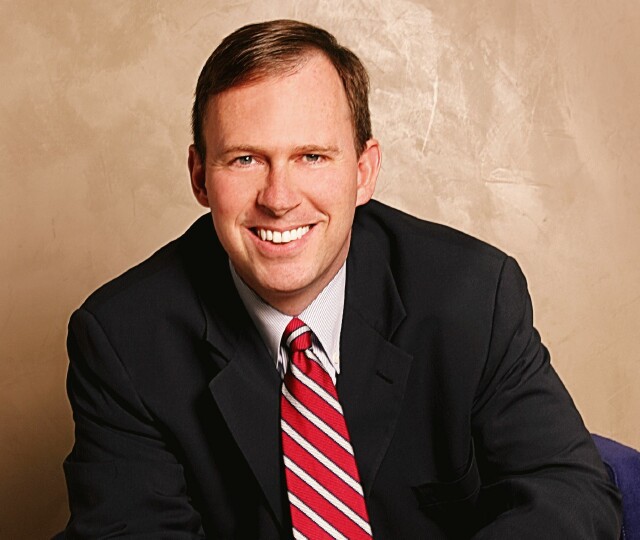 In a series of conversations with the leading confidantes and consultants in the ad automation and programmatic area, Jay Sears, Senior Vice President of Rubicon Project, discusses trends and issues of the day impacting advertisers and media owners. In this interview, he talks with Tim Hanlon, Founder and CEO of The Vertere Group.

JAY SEARS: What do you read and listen to, to keep up with politics, art and culture?

TIM HANLON: An eclectic cadre of digital sources: Jason Hirschhorn’s Media and Sports Redef newsletters; Bob Lefsetz’s Lefsetz Letter; Wait But Why; The Atlantic’s “CityLab;” Howard Stern; multiple Twitter feeds (including @HistoryInPics, @Super70sSports, @SportsPaperInfo, @BoredElonMusk, @AwfulAnnouncing, @EmptySeatsGalore and @EliteDaily); multiple podcasts (including Gilbert Gottfried’s Amazing Colossal Podcast, WTF with Marc Maron, Whistlestop with John Dickerson and SI Media Podcast with Richard Deitsch) . . . and non-fiction books! (The latest: “The Skies Belong to Us: Love and Terror in the Golden Age of Hijacking,” by Brendan Koerner; “The Divide: American Injustice in the Age of the Wealth Gap,” by Matt Taibbi, and “Disrupted: My Misadventure in the Startup Bubble,” by Dan Lyons.)

HANLON: Carvel Ice Cream commercials from late 70s/early 80s. (If you are from the New York City area these need no explanation.)

HANLON: The Vertere Group is a strategic consulting and investment advisory at the intersections of media, marketing, advertising and technology -- especially in the area of advanced TV and video.  Generally, we tend to be of most help to three types of entities: 1) legacy media content/distribution firms that struggle with emerging trends and technological innovations emanating from outside their traditional walls; 2) early-stage/entrepreneurial tech firms that, conversely, clamor for attention from and validation by established media companies, marketers and agencies, and 3) investors, analysts and management consultants who seek insight into the trends and inevitabilities of this fast-changing space.

SEARS: Tell us more about your firm:

SEARS: Tell us the most common issues you help clients on regarding automation.

HANLON: A surprising amount of troubled firms I have seen over the years followed a surprising common path: What may have started out as a compelling problem-solving ad technology or media data solution, somehow pivoted into some form of media ad sales arbitrage ad network play in an effort to bank the “easy money” from digital media buyers in the short term, and show fast growth to impatient venture investors.  Of course, as the ad tech landscape careens towards point solution consolidation, and as the entire industry now struggles to become more direct and transparent in operational practices, opaque intermediaries (like ad networks!) will be harder-pressed to prove value to ad buyers and sellers -- and many will be squeezed out of the food chain entirely.  I see a ton of tech-turned-media-sales companies now trying to quickly revert back to more tech/SaaS solution approaches, but it may be too late for a whole bunch of them at this point.

I also think you have a lot of pent-up venture money behind a number of firms that missed the window to go public that are “exit-stuck” for their investors (e.g., Mode Media), as well as a bunch of firms that actually did IPO under the media sales model and are feverishly trying to pivot back to their tech roots -- more painfully under public investor scrutiny. Fun times!

HANLON:Google and Facebook have an increasingly unassailable advantage in first-party digital consumer data that make it ridiculously difficult for anyone outside their hegemonies to exert influence over data-targeted media. The only exception to that rule (at least for now) is television, which is still very much a closed system relative to digital. As TV inevitably moves towards ubiquitous IP delivery, the application of data for ad targeting will radically increase importance, just like in digital.  It remains to be seen if either Google or Facebook can crack the data tech code for television -- it’s by no means a slam dunk for them, especially if the TV industry has anything to say about it. 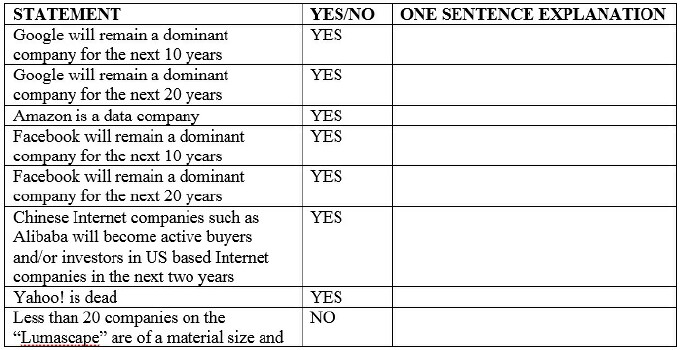 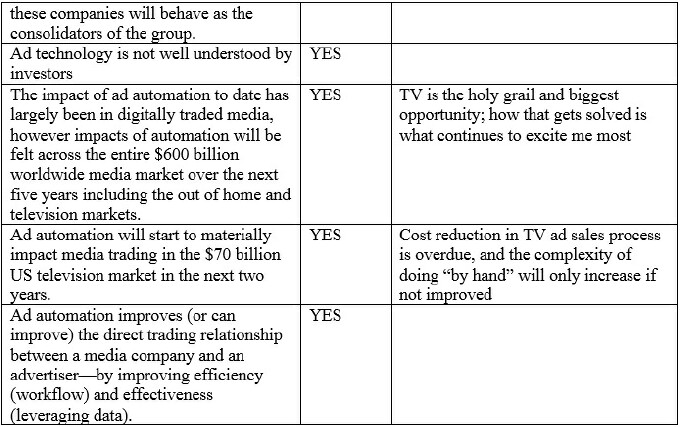 HANLON: Wife and two daughters to Italy to bike and backpack across the countryside.