Tish and Brandi Cyrus Share the Spotlight in Bravo’s "Cyrus vs. Cyrus" 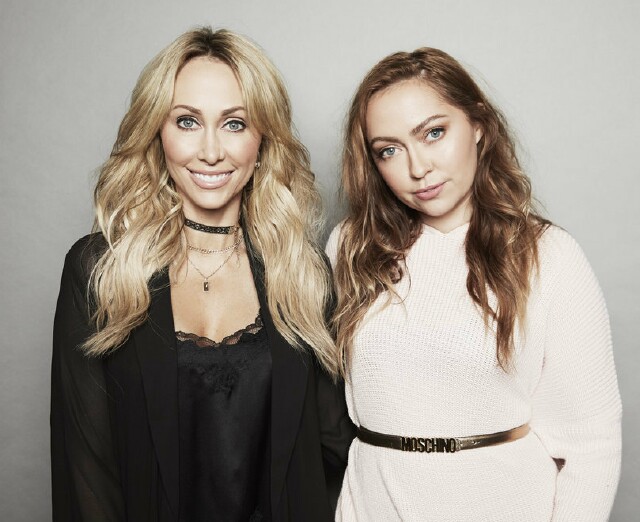 For Tish Cyrus, the opportunity of sharing her interior design skills has been a long time coming.  The mother of five, wife of singer/actor Billy Ray and mother to Miley, has devoted almost half of her life helping to make her family’s dreams become reality as their manager. Now thanks to Bravo, she and eldest daughter Brandi Cyrus are getting that opportunity with their new design series Cyrus vs. Cyrus: Design and Conquer and while the title might scream Celebrity Death Match, the reality is far from that -- sort of.

“We do argue and we do butt heads a lot,” Brandi told me of the mother/daughter working relationship.  “I'm not going to lie; you'll see some of it and I think that's part of what makes the show great, funny and, I think, very relatable.  It's funny, my mom and I have always just been best friends.  She's so young and had me so young that over the years we just developed this real friendship.  We haven't ever worked together, she manages both my sisters, but I've never worked with her in that aspect.  So it definitely was an interesting dynamic to go into it.”

According to Brandi, Tish has decorated every single room she and the Cyrus’ have ever had, so taking it to a professional level was a natural progression.  After a move back to Nashville from Los Angeles, the offers of television projects started flooding in and Tish weighed her options, ultimately choosing to finally display her own skills.

“I think for the last probably seven years, I've had a lot of different people come to me about doing a show,” Tish told me.  “I've kind of always been behind the scenes and while I love working in production and management, I always knew if I was going to do a show it would have to be something I was super passionate about, loved doing, and I would also have to be at a place in my life where I had the time.

”There was never a time that the mom role wasn’t first,” she continued.  “Then everything kind of fell into place.  It’s great for me to have that second act and do something for myself.  [The kids] are older now and I could put this show and this interior design dream of mine out there and make that a reality! Their support is pretty incredible.”

Tish is indeed receiving support for her Bravo design series from LA-based daughter Miley, who in addition to strongly suggesting she start a line of home wares, does make an appearance in the six episode series after deciding she needed a home closer to her family.  “She was like, 'Momma if you're going to be there I really want a place there,’” Tish said of Miley’s decision to have an additional home in Nashville.  “I had a house in Nashville that I’d bought and had a space that could be redone.  She really wanted to be closer to her family, just to go visit her brothers and to have her own space, so that's how [that] came about.”

When it comes to her kids spreading their wings, Tish has never put up any roadblocks, preferring to extend open arms should they ever want to return.  As was the case with Miley, who’s turned more than a few heads in her quest to become a young woman.  “I was talking to friends [recently] about parenting and being a mom,” she said.  “Somebody was saying their mom was upset because they moved out.  I wanted to raise my kids to be strong and independent and to follow their dreams, be themselves and make choices based on what they want, not the press or their management or a record label.

“I don't care who it is,” she added.  “You stick to what you want.  You be who you are and be proud of it. That's the one thing I've always told my kids.  You do what makes you happy, not what anyone else thinks.  I think I did raise really strong independent kids who really went for that.  I'm proud of every single thing that they've done.  I couldn't be more proud as a mom.”

For daughter Brandi the feeling is mutual.  “I'm her child and sometimes it blows my mind that she is a parent and a friend at the same time,” she said.  “That doesn't always work, you know?  It's a lot of trust.  We're all very transparent with each other and we can tell her anything and I think that's a big thing.  Our whole lives she's been, ‘Please come and tell me, please talk to me,’ and built that friendship. That is something that sets our family apart.  We do have each other.  Some people don't have that close family.  That’s due to my parents being amazing.”

Cyrus vs. Cyrus is telecast Thursday at 10 p.m. on Bravo.