TNT’s “The Alienist”:  How Daniel Brühl Brought the Title Character to Life 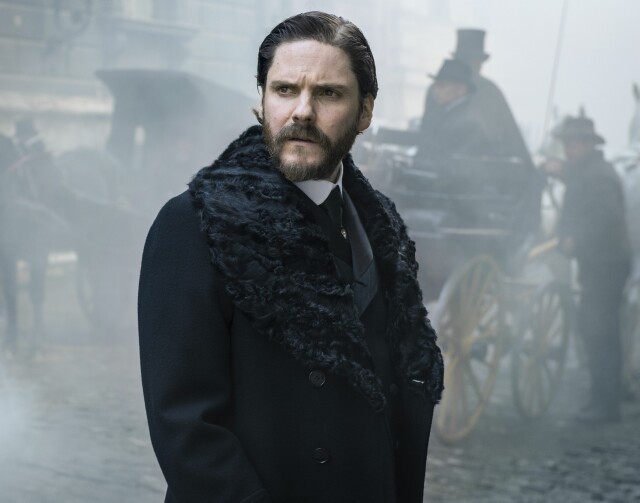 For Spanish born, German-raised actor Daniel Brühl, signing on to TNT's The Alienist, his first American TV series, was an easy decision once he'd convinced his German friends he wasn't doing an X-Files-type project.  "No, you're not getting The X-Files here," laughed Brühl during an exclusive interview with MediaVillage.  "I've had to get this right so many times, especially in Germany, where sometimes it's hard for people to understand the English language.  They were very confused.  It was like, ‘So you are doing an alien thing set in 1896, isn't that weird?’  I was forever explaining where the term alienist came from [it’s a word once used for a psychiatrist or psychologist], but I guess now that the show is coming out they will understand and won't be waiting for aliens to appear."

In The Alienist Brühl plays a criminal psychologist named Dr. Laszlo Kreizler who is called upon by newly appointed police commissioner Theodore Roosevelt (Brian Geraghty) to investigate a series of grizzly murders of young male prostitutes in 1896 New York.  Along with newspaper illustrator John Moore (Luke Evans), the duo are joined by Sara Howard (Dakota Fanning), a headstrong secretary looking to become the city's first female police detective, to conduct their secret investigation.  Using the emerging disciplines of psychology and forensics, the trio set out to apprehend one of the city's first serial killers.

Stepping into the dark world of 1896 New York was a dream come true for Brühl, who relished the series' subject matter.  "I'm just fascinated by the darkness," he explained.  "Since I was a teenager I've enjoyed reading Edgar Allan Poe and those Jekyll and Hyde type stories.  It had that atmosphere, a little Sherlock Holmes, Jack the Ripper -- it was all of the stories I'd enjoyed, so I always had a creepy fascination and joy whenever we had to shoot some of those gruesome scenes."

Brühl said that while he was not familiar with the 1994 novel by Caleb Carr that the series is based upon, as soon as there was a chance of playing the lead, he dove into the book -- sheets first.  "I hadn't read the book before meeting the director," he admitted.  "But once I heard about it and talked about the role I was like a 12-year-old with the torchlight under the blanket.  I basically read it in one day and night and that's when I started hoping that they would choose me because it just felt so right in every detail."

Still, he did feel there was added pressure bringing to life such a well-known character.  "In a way, it was good for me coming from Germany because the book is known there, but not that known," he said.  "So that kind of helped with the pressure and responsibility of bringing this character to life. But once I got on the set and started talking to my American colleagues, I got very nervous.  The fact that this guy comes from a Hungarian/German background, it all just seemed to match perfectly.  Thank God it all worked out.

“Also, my wife is a psychotherapist,” he added.  “We've been together for seven years and are both fascinated by our jobs.  "I said, ‘Darling, there is a possibility of me playing this brilliant psychologist and the story deals with the beginning of that science.’  She was equally as fascinated and crossing her fingers that I would get the part.  She's really been an advisor to me all the way through [this] so we kind of got to work together on it.  She recommended some criminal psychologists to talk to and informed me as to what to read.  We talked about every episode.  I would fact-check things with her for accuracy and she gave me some very precious advice that I am really thankful for."

In addition to the incredible attention to detail of the production, Brühl relished the chance to explore a character over a 10-episode arc – something that isn’t possible in film work.  "It was different to spend so much time with one character and to explore that character to his core,” he revealed. “Sometimes you are a little restrained in a movie where at minute 10 you have to reach a certain point, by minute 30 it's another point.  You don't really have the luxury of exploring, so I'm happy that they adapted this and decided to tell it episodically.”

Brühl describes The Alienist as “a dream project” and despite getting to experience a time period he’s so fond of, admitted to one last bucket-list item. “I would love to meet the author,” he smiled.  “I'm very curious and also a little scared."

The Alienist is telecast Monday at 9 p.m. on TNT.