Tonya Harding Dazzles on "Dancing with the Stars" 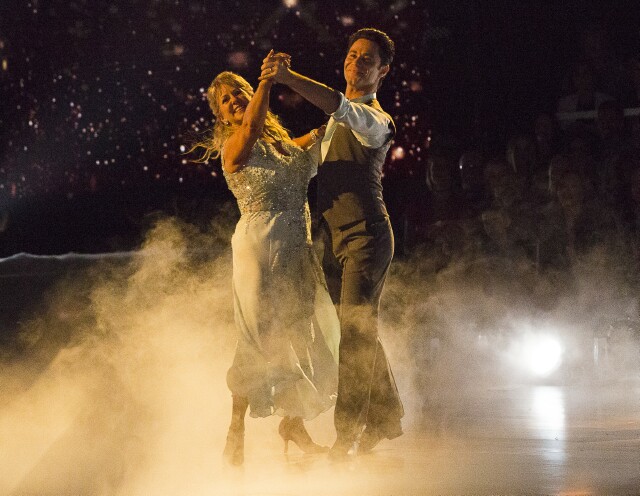 As Dancing with the Stars: Athletes kicked off its limited run on Monday night, several surprising front-runners emerged from the pack of ten athletes.  While not the highest scoring couple (23/30), infamous ice skating legend Tonya Harding and partner Sasha Farber proved a joy to watch in the ballroom.  Harding received high praise from the judges for her bright and breezy fox trot and for her natural musicality, while the performance itself genuinely seemed to be one of redemption.  "I was very excited; I wanted to just go out and do the best that I could and have fun doing it -- and I did," an exuberant Harding gushed to MediaVillage after the show.  "Sasha turned me into a lady, a graceful lady, on the dance floor and I showed America that I deserve to be here and to be a part of this truly amazing event with other great and truly amazing athletes."

According to Harding, she's wanted to do the show forever, and the bonus of having stars in the audience from the Oscar-winning movie based on her life I, Tonya only made the night sweeter.  They included Allison Janney (who portrayed her mother) and Mckenna Grace (who played a young Harding), along with screenwriter Steven Rogers.   "The movie changed my life and I didn't expect anything from it," she said.  "But when I asked Allison, Mckenna and Steven to come to the show and support me, they said, 'absolutely.'  I was just thrilled that they could be here for my new beginning, which was made from a fresh start from them -- and to show myself that I could do it."

After a narrow escape from a speedy first-week elimination (determined by the judges’ scores and an online viewer vote), Harding will be advancing to week two of the competition along with Olympic figure skaters Adam Rippon (and partner Jenna Johnson) and Mirai Nagasu (with Alan Bersten); Olympic Luge champion Chris Mazdzer (and Witney Carson), and NFL cornerback Josh Norman (with Sharna Burgess).

Adam Ripon (who received 24/30 for his fox trot) admitted it is no coincidence that the skaters transitioned from the ice to the ballroom with such ease.  "You know, I think it's because we've all performed before," he told me.  "But this is definitely a completely different ballgame.  It's so much technique, and so much work goes into these dances … we are all completely out of our elements as there are a lot of really awesome dances.  Chris was awesome and Josh was incredible.”

Mirai Nagasu (who scored 23 for her salsa) may be in major competition mode against her skating friend Rippon, yet she's just happy to be taking this journey with him and hopes they will be the last two standing.  "Its amazing Adam is here,” she said.  “We both got a phone call, but there's no confidentiality in a best friendship, so we both knew we were doing the show, and I feel we are in it together."

While not a skater, Olympic Luge champion Chris Mazdzer 's (who scored 21/30 for his salsa) instant fame following this past Winter Olympics was nothing to his family compared to landing a spot on the show.  "It took me two phone calls [for them] to actually believe me," he told me.  "I mean, they called me like two days after my race.  My mom thought that the Olympics was the highlight, then I called her and I was like, ‘I'm going to be doing the show.’  She didn't believe me.  The second call I was like, ‘I am serious’ and she freaked out!  I can't let her down!

Sadly, with the show’s shorter run this season opening night eliminations were a necessity.  The first two competitors to go were retired baseball star Johnny Damon (and Emma Slater) and snowboarder Jamie Anderson (and Artem Chigvintsev).  "Unfortunately two people had to go home tonight and unfortunately it was us," Damon said with a sigh.  "I knew there was a possibility [it could be us] going in seventh place and getting the votes would hurt.  I know my score wasn't the best.

"We actually had a great dance planned for the second week," he continued.  "It had a whole baseball theme to such a great song, but the voters have spoken and unfortunately they didn't choose us.  It was a tough voting system but everybody had to play by it.  Now I get to go home and see my kids sooner than I thought." 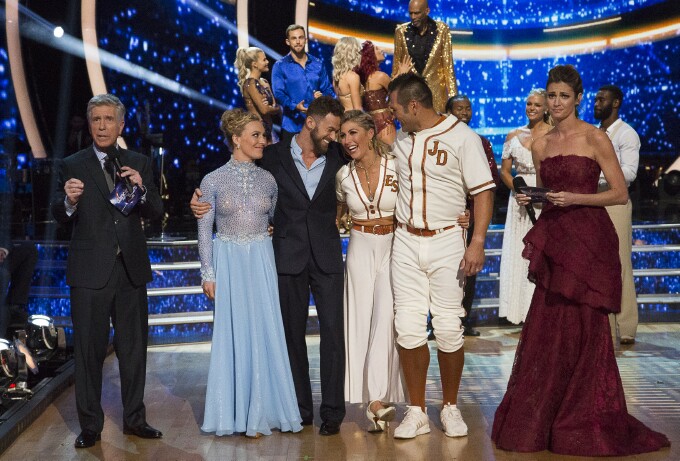 Dancing with the Stars: Athletes continues Monday nights at 8 p.m. on ABC.