For local broadcasters Telecommunications is one of the largest advertising categories, second only to Automotive in overall advertising dollars in 2010 according to Kantar Media (Total spend amounts to $1.5 Billion). The wireless segment of the Telecommunications industry has experienced strong growth in recent years; according to CTIA (The Wireless Association) wireless penetration reached 96% in the U.S. in 2010, up from 69% in 2005. In addition, over 26% of households are now wireless-only, up from 8.4% in 2005. (See report)

The main competitors – AT&T, Verizon, Sprint and T-Mobile – are aggressively looking to grow their market share by offering targeted wireless service plans to select consumer segments.  To maximize their chances of reaching their key customers – finding The Right Audience™, these marketers should consider dialing in to the local early morning news programs airing in many local markets.   TRA examined the local audiences tuned in to news broadcasts on the ABC, CBS, Fox and NBC affiliates in eight local markets, and found consistently high concentrations of households likely to contain Heavy Cellular Service Users – those who spend $200+/month on their wireless service (much higher than the $47.21 average reported by the CTIA).

For the very early M-F 4:30-6AM news time period, the index for Heavy Cellular Service Users in these eight markets ranged from a 234 in Seattle to a 117 in San Francisco.  For the M-F 6-7AM time period, the index ranged from a 206 in San Francisco to a 122 in Miami.   Maximizing ROI through smarter media planning, now, that’s news worth texting about! 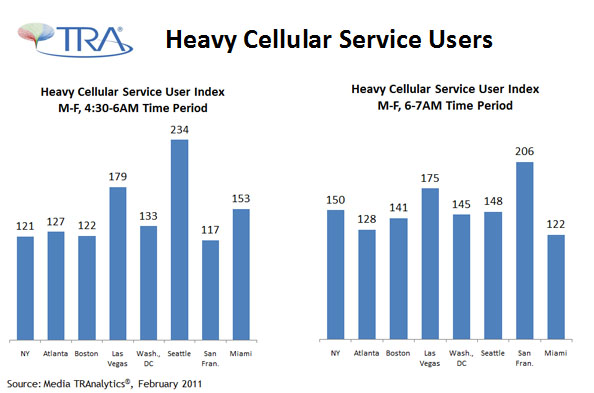