By many accounts, political ad spending for 2012 could come close to $3 billion. Battleground states such as Florida, Pennsylvania and Ohio could be the biggest beneficiaries as candidates target their dollars to reach swing voters. According to TRA’s Media TRAnalytics®, to reach households that have made a political donation – those homes with viewers who have voted with their wallets – it is wise to look beyond the obvious.

Let’s look at Political Donor Primetime Ratings in March 2011 in three markets in swing states; the top nets are listed below in rank order. While there are many similarities in the top five spots, the top 10 nets in each market are far from identical. Unique to Miami in the top 10 are Univision, Bravo, CW and Telemundo. Unique to Cleveland are Food Network and MSNBC, and unique to Philadelphia are CNN and TNT.

That’s just one daypart, three markets. Finding The Right Audience™ for political advertisers is easy, with Media TRAnalytics®. We’ll share more political insights in future blogs, but if you don’t want to wait, you know who to call. 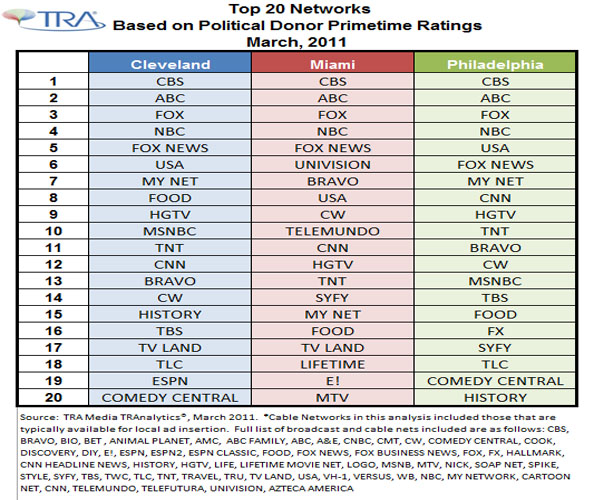