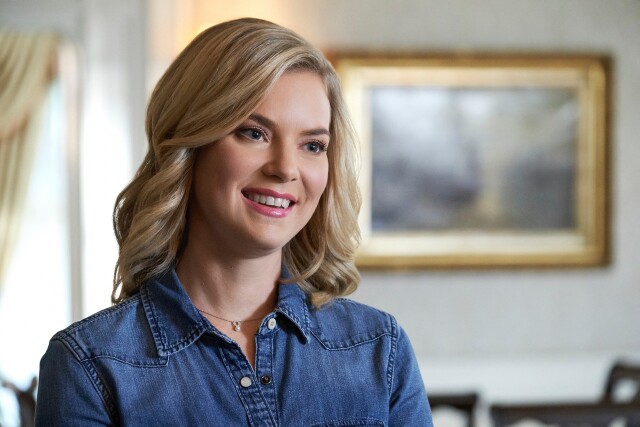 A year ago, Hallmark Channel favorite Cindy Busby was Marrying Mr. Darcy (opposite Ryan Paevey), in the sequel to her 2016 hit Unleashing Mr. Darcy. Busby returns to the network this weekend, effortlessly embedding herself into another of Hallmark Channel's wildly popular franchises, the Josie Bisset and Jack Wagner led Wedding March series, with My Boyfriend’s Back: Wedding March 5.  The movie marks Busby's sixth project for Hallmark Channel and Movies & Mysteries combined, and that's something the delightful actress still pinches herself about.  "I definitely feel super grateful," she beamed when MediaVillage sat down with her for an exclusive chat.  "Honestly, I don't know how it happened; as life does, it just kind of did.  Lucky in Love was my first [in 2014] and it's the darnedest thing.  For years I auditioned for Hallmark and I couldn't even get one line in a movie!

"I was like, 'I feel like I am pretty Hallmark,' I don't know what else I can do?" she continued.  "Then one day Lucky in Love happens and oddly I booked it while I had brown hair.  That was hilarious; I followed that with Cedar Cove, again with brown hair, then subsequently became blonde again, but I always thought it might have happened before."

It's hard to believe a year has passed since we saw Busby walk down the aisle with Mr. Darcy, something she also finds bewildering. "Where has the year gone?” she laughed.  "It goes by so fast.  Those movies were just so much fun.  What’s nice about it is when you do a movie you have [just] two hours to explore the characters' stories and growth.  So it's always nice to be given more time and an opportunity to show them grow [in sequels].  It’s like going back and having a family reunion." 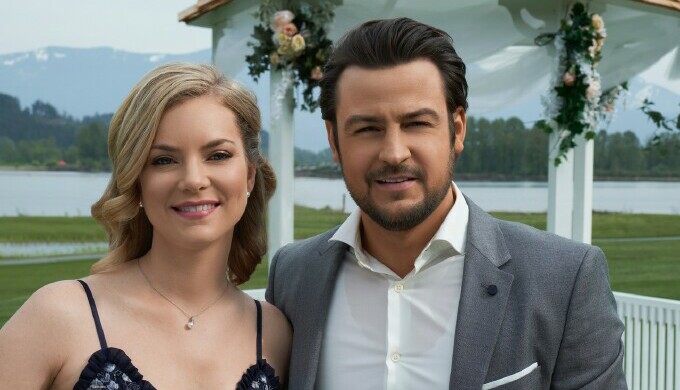 In My Boyfriend’s Back: Wedding March 5, Busby stars opposite Tyler Hynes (above right) as Annalise Collins, wedding planner extraordinaire, looking to take her business to the next level.  With an opportunity to wow investors, Annalise secures Willow Lake Inn as the location for the destination wedding of Jen (Sunita Prasad) and Lucas (Lane Edwards).  As fans know, the inn is owned by Mick (Wagner) and Olivia (Bisset), who are about to celebrate the 25th anniversary of their first date.  As the ever-expanding wedding proves challenging to Annalise, she's thrown another curveball when best man Brad Buckley (Hynes) arrives.  The same Brad she grew up, had a relationship with and who then, five years ago, dumped her on the day they were supposed to relocate to New York.

"The thing I loved about this movie is there are three stories all kind happening at the same time, and they're all connected somehow," explained Busby.  "There's a lot of work to be done with [Annalise and Brad’s] relationship, but you can't deny the fact they've always loved each other and they do have so much history.   They knew each other as kids, so it's not like they met at a bar, dated for three years and that was the end of it.  They've known each other their entire lives and there’s something really special about that.

"I can see how it could be even more devastating to lose someone who’s not only been a lover, but also a best friend," she added.  “You really can't throw those friendships away because no one really knows you like those people; they’ve seen it all.  We all have people in our lives like that." 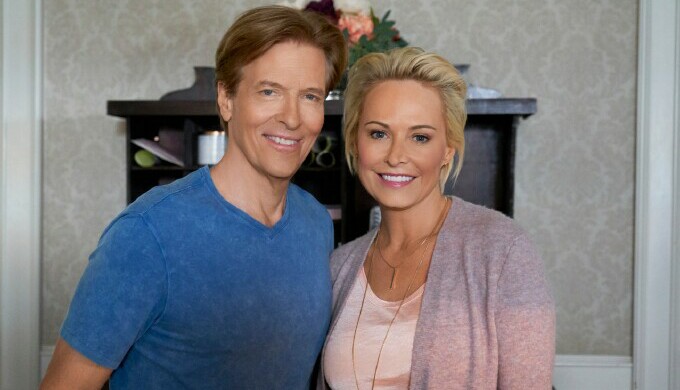 It's a brave move for any actor to walk into an existing franchise as a new focal character, and with Bisset (above right) and Wagner (left) having appeared in the four previous Wedding March movies it could have been an uncomfortable experience.  Thankfully, that wasn’t the case.  "I credit all of that to Jack and Josie as they were so welcoming," Busby said.  "Right off the bat they were just so friendly and as soon as I stepped on set, I felt comfortable.  They really made it so easy.  I've always said it always starts from 'up' [No. 1 on the call sheet], and if those people are welcoming it really sets the tone for the rest of the shoot.  That's what happened.”

"I have to [also] say working with Tyler was awesome," she added.  "We share a lot of mutual friends and he actually did a series with one of my best friends like a million years ago, which I did an episode of, so we had crossed paths.  Getting to know each other was easy because we have very similar senses of humor and that always breaks the ice.  I truly can speak for the entire cast in that we all genuinely loved hanging out.  All six of us would sit together talking between scenes.  Jack and I shared some very deep conversations, something I really appreciated because I love having those talks.  As an actor, you're always curious about human nature and the 'human' experience."

While Busby is hopeful for another Mr. Darcy movie, she is also open to another Wedding March -- if the Hallmarkies want it.  "The Hallmark fans are so loyal," she smiled.  "No matter where I go, or what I do, they're always the first to say things like, 'Cindy, we are so proud of you!'  They'll also defend you!  I find the fans are kind of like my mom, like, 'Don't you talk about my girl like that!'  That's kind of rare nowadays."

My Boyfriend’s Back: Wedding March 5 will be telecast Saturday, June 8 at 9 p.m. on Hallmark Channel as part of the network’s annual June Weddings programming event.