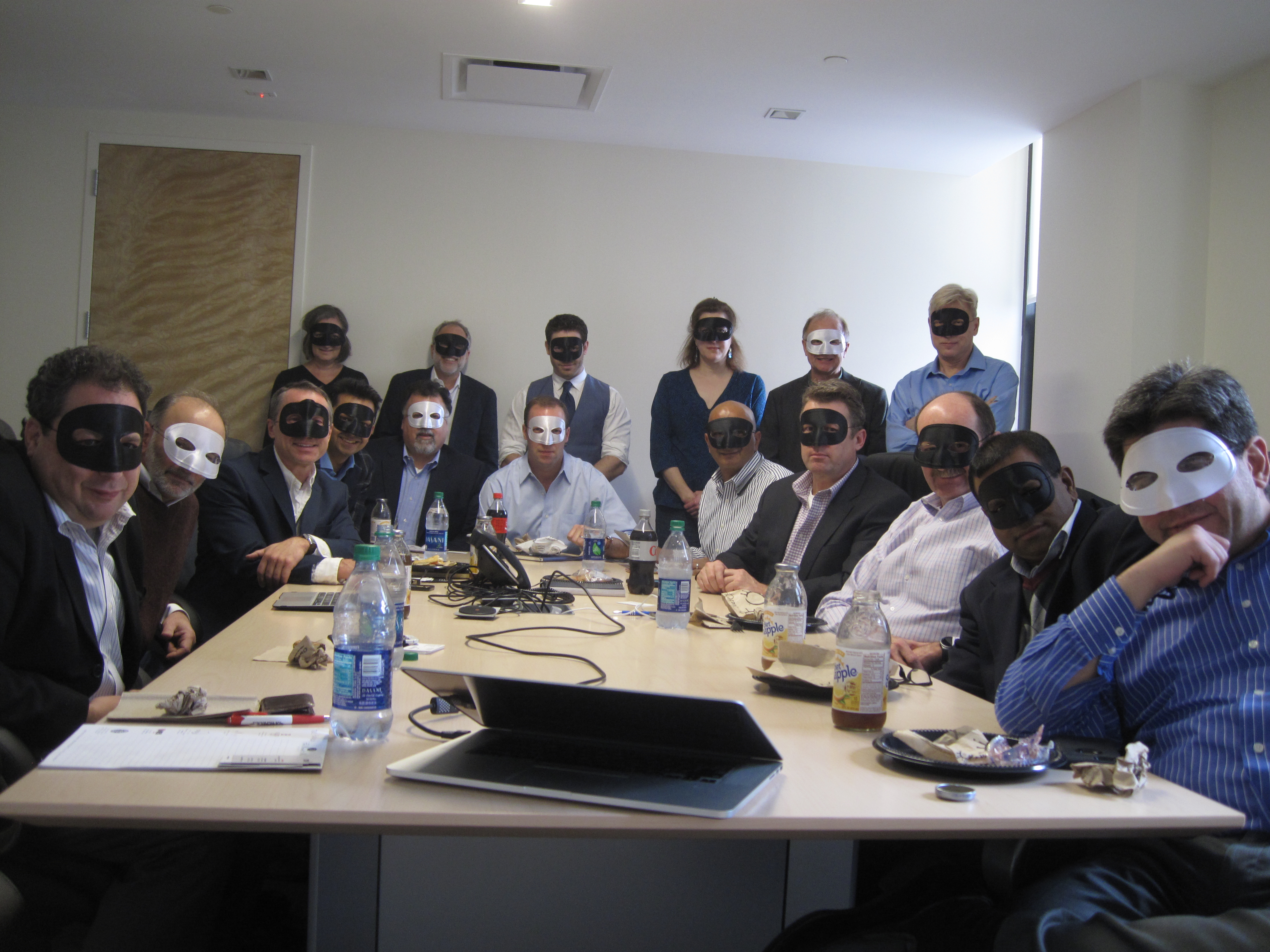 As part of the secretiveness of the Secret Society meeting, all wore masks … just for the group photograph. Then the masks and gloves were off. The areas of lively contention were de-duping datasets, the cost of data and data-gaps.

My Take: The Secret Society was formed to take a deep, objective dive into the issues of TV Programmatic. In a media storm of pronouncements and self-promotions by various companies, it is difficult for many of us to make sense of the real challenges in rolling out programmatic into TV -- especially national TV. For example, while I was aware of the need to de-dupe data, I never considered the challenge of STB household data overlap when one begins to collect STB data from several suppliers. I assumed that the PII (Personally Identifiable Information) would solve that problem. With this issue, as with the others outlined in this article, the question of responsibility loomed large. The data-ists at the table thought the responsibility of de-duped audiences resided with the ad agencies and programmers; the ad agencies and programmers vehemently suggested the reverse. From what I see so far, TV Programmatic is becoming one big game of hot potato.

At the first meeting of the Secret Society, a few months ago, programmatic local TV platform Videa discussed the need for the media community -- buyers and sellers -- to have access to multiple data sources to drive programmatic market transparency. They said that they were in discussion with a variety of data companies -- 4C Insights, Cardlytics, Civis, FourthWall, Nielsen, Rentrak and TiVo -- to obtain data sets from each in order to comprehend how they could be utilized to better serve their constituencies.

For a marketer cobbling a national campaign using the full set of data suppliers from Rentrak to Nielsen, to TiVo to FourthWall, to AT&T/DirecTV to individual MVPDs, there is the issue of de-duping these standardized but overlapping industry datasets. No one is doing this now. All concurred. Videa's Brett Adamczyk, Vice President Business Development and Strategy, led the discussion. "Here is part of my problem," he said. "I'm paying, or will be paying, millions of dollars to license datasets from the majority of people that are on that side of the business and a lot of those people are licensing the same data from the same people that are on that side."

The question raised was: Are the buyers of data getting the same data over and over again? How can the players in the space that are utilizing the data de-dupe it so we can be sure that we are not using the same homes several times when we only need to use them once? "When I try to do my targeting on a program level basis, we (Videa) are pulling information from our station partners' traffic warehouses that we have four years of history down to the spot level: what ran, what the price was, what the rating was…," Adamczyk explained. "What we need to be able to do is overlay data from an audience targeting perspective so we can index those attributes against every program that is on the schedule."

Mitch Oscar, the Secret Society organizer, said, "In terms of national programmatic TV, advertisers do not know the specific TV network programs that they purchase. We only know networks and the total number of impressions purchased by the individual network. No dayparts. At the conclusion of the campaign the post analysis consists of total impressions broken down by individual network, daypart breakdown by total schedule (all networks) and, if requested, an As Run report." In terms of the As Run report, Oscar quipped, "The As Run report for one of our campaigns, which cost $150,000, consisted of over 163,000 lines of reportage detail spread of 3,500 pages."

The discussion then jumped to the topic of data and TV addressability. The group agreed that local broadcasters, at this juncture, do not have addressable capabilities. An advertiser can buy the DMA, which is tough to target audiences. A debate ensued about what type of data intelligence could be brought to local other than the generic DMA buy or the more granular zip level. Frank Foster, Senior Vice President, General Manager TiVo stated, "The CEO of Walmart says that programmatic TV doesn't do what he wants for Walmart. He may want to drive people to the store from 12 noon to 5 p.m. so they need to see the message from 10 a.m. to 12 noon. We therefore need first party foot traffic and to be able to show the differences in campaigns for both local and non-local."

As the meeting concluded, a task was presented to different members. Videa was directed to put together a list of 10 data points that they would want the data providers to help answer. TiVo, 4C Insights, Rentrak and Epsilon were tasked with coming up with 10 data points that individually they think Videa should be requesting. USIM, Horizon and The Media Kitchen would compare notes and present findings.

The challenges seem formidable. Even the creation of a JIC (Joint Industry Committee) to facilitate the standardization of edit rules or duplication of datasets is fraught with business conflict. If, for example, it is decided that one data company has a large duplication with other data companies, how would the market respond? Would the highly duplicated company lose business? Something that ultimately could help the many could potentially be deadly for a few. But not finding ways to address data concerns is also problematic.

As Russell Zingale, President of USIM, noted, "Every data company should be purchased by everyone in the food chain, whether it is a content creator, content distributor like the MVPDs or an agency. That is a lot of data for each of these groups to license -- though it would be wonderful for the data companies to have such a lucrative business."