Two and a Half Men - Before and After Charlie Sheen - DailyTRA

Two and a Half Men debuted on CBS in September of 2003 and finished the year as the 15th ranked TV show in the United States. Over the next seven seasons, the ratings remained solid, finishing in the top 20 each season. During the middle of the eighth season, CBS and Warner Brothers stopped the production of the remainder of the season due to comments made by Charlie Sheen about the executive producer which ultimately led to his firing. The studio decided to recast his part and continue the show with Ashton Kutcher as the main character.

With all the anticipation for the "new" Two and a Half Men, many wondered if it could continue on its streak of being one of the top rated programs on television. The premiere of the ninth season did not disappoint - delivering its highest rating to date of 28.7 million viewers. In 2011, the NY Times dubbed the show as "the biggest hit comedy of the past decade" which proves that Two and a Half Men didn't skip a beat with the new cast and was still a popular program on Monday nights.

Advertisers need to know if viewers of the ninth season premiere are purchasing the same products as last year's premiere. With TRA's Media TRAnalytics® StoryFinder™ report they are able to answer that question. When you look at the top 10 category purchasers of the eighth and ninth season premieres, only Frozen/Refrigerated Meals, Dog Petcare and Cat Petcare appear in both. With the addition of Ashton Kutcher, more female products are being purchased such as Hair Spray, Skin Care and Fabric Softener Liquid. This allows not only the media buyers but also the networks to know what clients to buy/sell ad space to. For more information about TRA and their services, please visit www.traglobal.com. 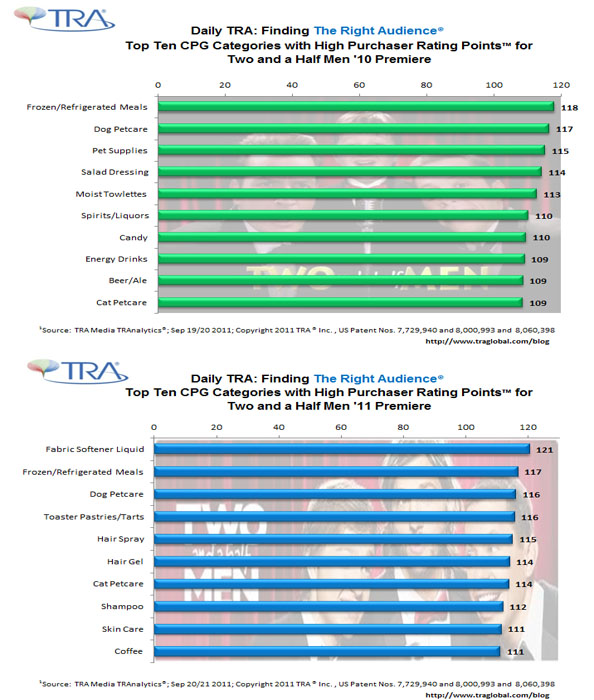