As a champion boxer, I've faced some tough opponents: Christy Martin, Mónica Núñez, Jackie Frazier-Lyde. But even I didn't realize that one of the toughest jobs in my life would also be one of the most rewarding – being the mother to my two children, Curtis and Sydney.

Getting my kids to brush their teeth was a special challenge. They squirmed. They lost focus. 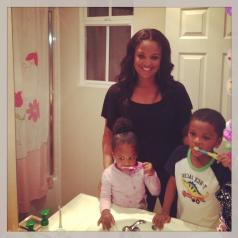 Once the little one swallowed her toothpaste! It's no wonder that fewer than half of American parents currently report that their kids brush their teeth twice a day.

The truth is: tooth brushing is more important than you may think. Right now, dental decay is the most common chronic childhood disease in America. And for more than 16 million kids, the disease goes untreated. Minorities and children from low-income families are disproportionately affected, with double the number of reported cases.

Good health has always been a priority in my life. I want it to be a priority for my kids, too. That's why I developed this list of quick "Tooth To-Dos" to help busy parents maintain good brushing habits:

1. Make sure your kids brush with fluoride toothpaste for 2 minutes, twice a day.

For kids younger than age 2, use a soft toothbrush and a little water; no toothpaste is necessary.

2. Teach your kids to floss between their teeth once a day, every day, to remove plaque and food where a brush can't reach. Kids' teeth can be flossed as soon as two of their teeth touch each other.

3. Start taking your child to the dentist regularly no later than age 1.

Of course, I'm not the only one working to help kids start good brushing practices early. Last year, a group of more than 35 leading oral health organizations called The Partnership for Healthy Mouths, Healthy Lives came together with the Ad Council to launch a national public service advertising campaign along with a fun, engaging website, 2min2x.org.

The site features free, 2-minute video clips that kids can watch while brushing. Featuring characters like Elmo, Bugs Bunny and the Dream Jam Band, the videos keep my kids engaged for two full minutes and leave them asking for more!

I know that in today's supercharged world, it may seem difficult to find two minutes to do anything. But believe me when I say that the smiles on your kids' faces will be worth it.

Laila Ali is a world-class athlete, fitness & wellness expert, cooking enthusiast, founder of the Laila Ali Lifestyle Brand and mother of two toddler-aged children. In addition to her latest work as a cast member of NBC's highly touted reality program "Stars Earn Stripes" where she competed to raise money for a charity that supports veterans and their children, Laila is currently the host of "Everyday Health" airing nationwide on ABC, and former co-host of "American Gladiators." Laila also authored and published a motivational book for young women titled "Reach!" (Hyperion, 2003). She has appeared in various cooking segments on Rachael Ray, as well as Food Network's "Emeril," " Paula Dean " and "Chopped All-Stars" with tasty recipes geared towards a healthy, active lifestyle. In 2007 she captured the hearts of millions and made it to the final round of the fourth season of ABC's "Dancing with the Stars." She's also appeared as a guest-star on popular fitness show, "Biggest Loser" and tickled America's funny-bone with a hilarious role opposite Kevin Hart on the hit comedic series, "Real Husbands Of Hollywood."