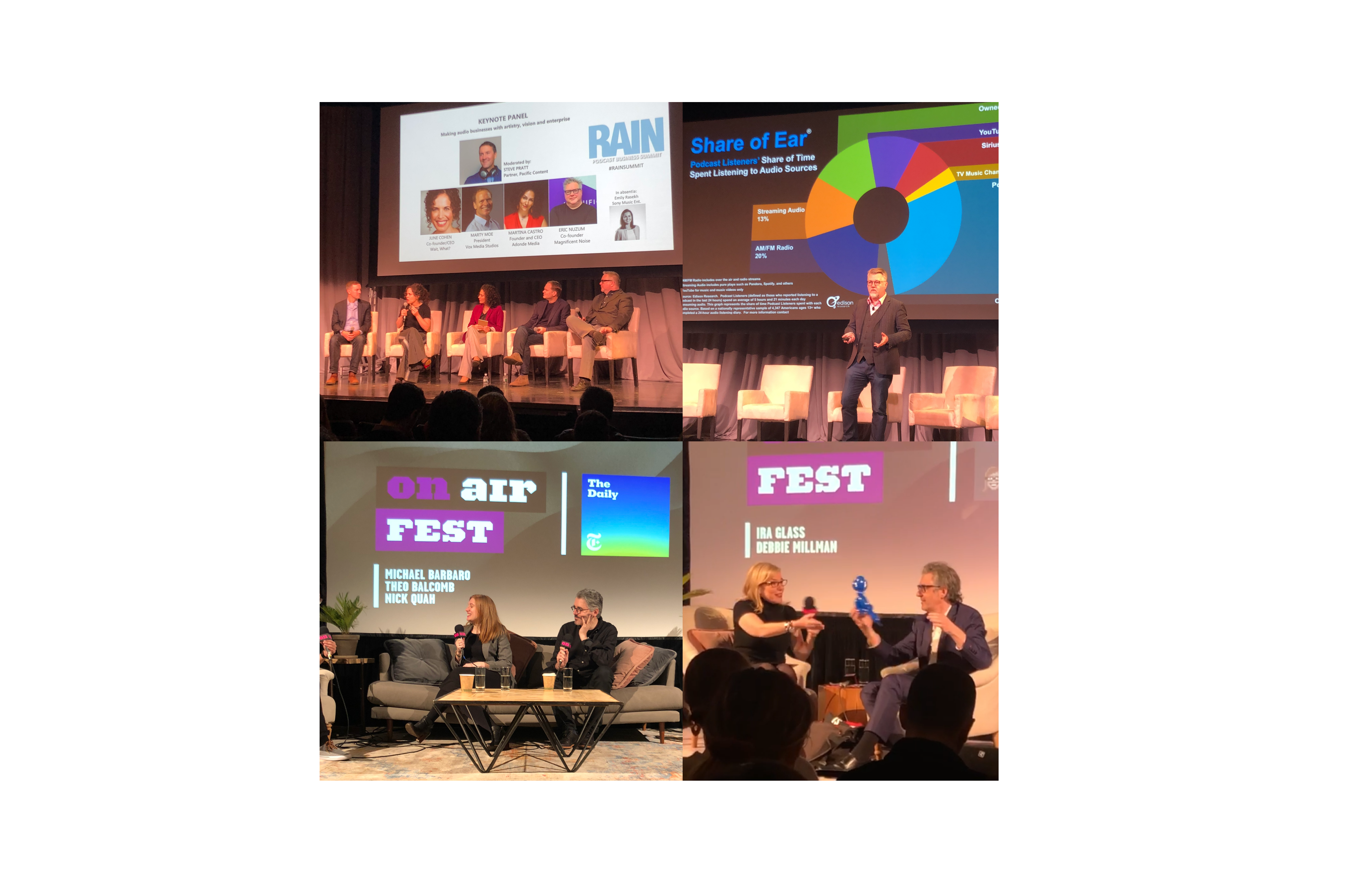 Last week, two different podcast conferences each held their annual events. The RAIN Podcast Business Summit kicked off on March 4 at Manhattan's New World Stage, with James Corden-esque-styled emcee James Cridland rallying the suits with an upbeat presentation of stats. Speakers were podcasting notables with more of a business background, including senior sales and research executives and a smattering of show hosts, such as audio conference staple duo Conal Byrne and Holly Frey.

Two days later, the On Air Fest (held at Wythe Hotel in Brooklyn) opened with a notably more hipster audience and a completely different vibe: Attendees closed their eyes to concentrate on a creative bath of sounds by audio producer Cher Vincent and producer/conceptual artist James T. Green. The slow build of layered sounds — conversations, street sounds, dog barks, throat clears, footsteps — which emerged into a symphonic "ode to sound," was a fitting start to an annual festival dedicated to the culture of audio.

Speakers were among the most well-known in the industry. Nick Quah of industry newsletter Hot Pod took to the stage to introduce Michael Barbaro, host of New York Times' The Daily podcast, with a fitting quip: "Come out and let's see what you look like!" And Design Matters podcast host Debbie Millman recorded an intimate conversation with Serial founder and, arguably, the "father of podcasting," Ira Glass (who also demonstrated his skills in balloon animal artistry).

So, while both conferences covered essential aspects of the medium, the On Air Fest, with its interactive experiences — from Audible-sponsored listening booths to multimedia productions to DJed mixers — won the cool and fun factors. Then again, RAIN is called a "business summit," and its value was clear to attendees such as Nick Southwell-Keely, U.S. director of brand partnerships and sales at Acast.

Southwell-Keely's appreciation was tied to how "encouraging it was to see just how far podcasting has come in the past few years as a platform for monetization. More and more platforms are finally adopting dynamic ad insertion as a standard in the industry — a format that's helping more and more creators get compensated for their work."

He pointed out that there had been a great deal of hesitation around dynamic ad insertion in podcasts, as well as "a reluctance to stray from baked-in host-read sponsorships." Today, much of the discussion is on improved measurement of all ad formats and the ever-more sophisticated attribution tools in the space that are benefitting creators, he added.

Omer Jilani, vice president of sales for Claritas-owned Barometric, heartily agreed. "I love the energy and enthusiasm around the podcast medium from content creators and the breadth of diverse content, tech platforms, [and] evolving measurement capabilities," he said. "But this year? Attribution, attribution, attribution! [The conference] seemed to be all about advertising measurement, which made it very exciting for me."

Still, a recent Westwood One poll found that 83 percent of ad buyers think podcast measurement is just "fair" or "poor." That supports advice from Chartable chief executive officer Dave Zohrob, who told attendees to think holistically: "Focus less on whether an ad should be placed pre- or post-roll and start with whether the podcast is the right fit overall."

Podcast pundit, author, and producer Eric Nuzum's guidance went one step further, with a push for creativity. Joking about the categories that listeners consistently rank at the top, he said, "We'll eventually run out of comedians and unsolved crimes."

Late to the Game?

At RAIN, attendee Vernon Foster II, a content manager for Acast, told me that creators frequently ask, "Is it too late to get started in podcasting and have a chance?" As he said, "I think Eric Nuzum hit the nail on the head during his panel when he said that the current number of podcasts [900,000] is equivalent to the number of websites on the Internet in 1997. There's still a huge opportunity for new creators and new podcasts."

The business-minded and the creatives alike have some overlapping motivations for diving in. One is podcasting's expediency. Producer Ross Dinerstein, with some 40 film credits, said his most recent show (The Most Dangerous Animal of All, launching on FX) took two years to make — versus the forthcoming Abuse of Power docu-pod he's creating now, over a matter of months. That certainly abets increased ad inventory and speed to market.

For journalist and podcast personality Touré, an emcee of On Air Fest who has worked in television and magazines, "there's no medium like podcasting that gives you the freedom to bring what you want to people's ears."

Work x Work agency founder and partner Scott Newman, creator of On Air Fest, sees that freedom as the embodiment of the maker-driven event, given the low barrier to podcast production. As such, he said, "Major publishing companies think of it as ad inventory and digital media. But artists and storytellers and tastemakers see it as another place to tell a story from the heart. And when you take an audio story as the hero and can add visuals, context, music, and other people..., it takes on a more multi-dimensional experience." That was exactly what they illustrated during On Air Fest with a version of Radio Diaries, complete with live narration of an episode, live music, and projected original animation.

That diversity of storytelling was reflected in On Air Fest's audience, but not as much at RAIN. A female executive producer from Mexico City who attended both conferences noted the clear dearth of multicultural attendees and panelists at RAIN. As podcasting grows its international content, as well as its wider uptake stateside, this clearly needs to be addressed.

Who knows if this will be the last time for the foreseeable future when a few hundred people can safely gather for a common experience in person, but, for now, it was wonderful — and a testament to the power of the spoken word to share knowledge and art.