Uncovering Reddit's Underbelly and Why Advertisers Should be Wary 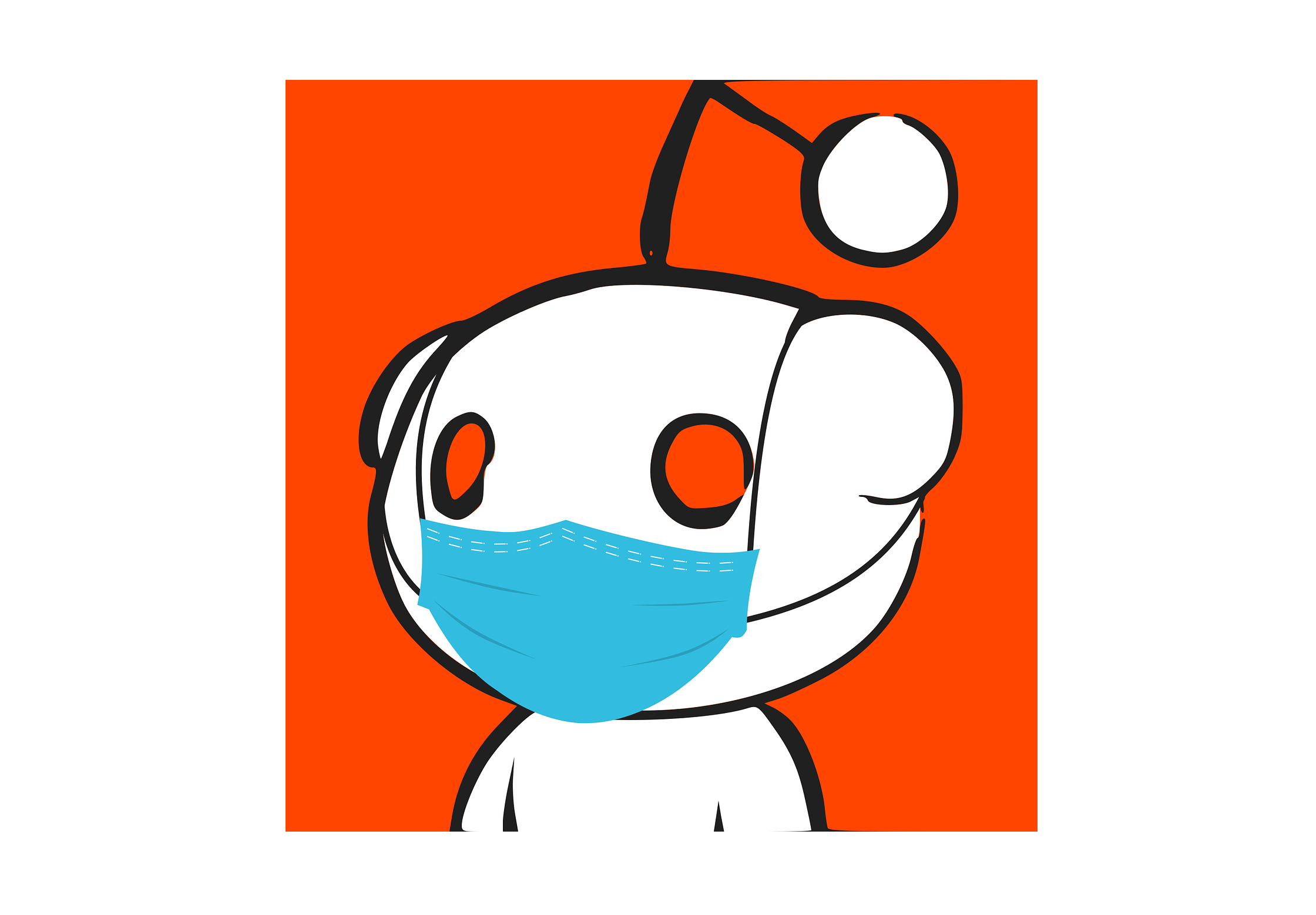 Reddit is far less monitored and censored than most other mainstream social media platforms. When you enter Reddit, you are surrounded by rabbit holes that take you into strange (and sometimes very dark) places. As described by a Reddit user, "The site is made up of 'sub' Reddits, which are all individual communities. Every single post you see on this site belongs to its own community, with its own set of users, and with its own set of rules." Another user adds, "A subreddit is a section of Reddit. You can think of [subreddits] as theme-based sections of a forum. For instance, if you want to talk about gaming you can go to r/gaming but if you want to talk about a specific game like League of Legends  you go to r/leagueoflegends."

Most groups are supposed to be responsible for policing their own subs with moderators. Yet many of those subs themselves may be, at the very least, highly problematic to owners of intellectual property (IP) when subreddits offer their members a path for downloading content without paying the rightful usage fees, and others that advise their users how to perform illegal acts.

Even for the things that aren't illegal, there are plenty of unfiltered comments that seem to violate Reddit's policies and go largely unchecked. While Facebook and Twitter have gotten a lot of backlash for allowing hateful content and conspiracies -- and then more backlash for banning them and censoring free thought -- Reddit has stayed largely off center stage. The platform has skirted mainstream criticism and tends to be pretty loose on what it allows.

When it comes to illegal activities or subs filled with conversations sure to have negative social impact, you don't have to look very far or dig very deep on Reddit.

For example, there is plenty of advice on Reddit for accessing free movies and TV shows. This illegal activity has threads that offer step-by-step approaches and sites for best access on subs such as r/IllegalLifeProTips, r/MovieStreamingSites and r/piracy. 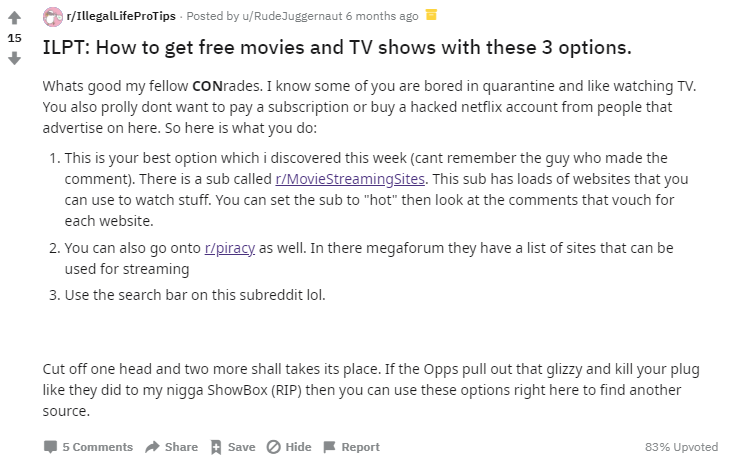 As Redditers say over and over, when one gets cut out, more will crop up. Even if a thread is eventually banned, more threads with different names will be created to fill the void.

For example, posters such as Dijan124, asked why r/shoplifting wasn't banned, since it encouraged illegal behavior. Lo and behold, it is now a banned sub.

If you make your way over to r/Piracy, the sub has over 600,000 members. The group calls itself the Piracy Wiki – Megathread for downloading sites, apps, tools and guides. Reddit users publish details on how to circumvent the legal purchase required for this content by accessing sites that make content available through pirated codes.

"Lost my job due to COVID and my Hulu and Netflix ran out," begs one user on r/FreeMovieAccounts. This request is followed by 41 comments about who has Netflix and Hulu accounts they can share or "trade."

There are countless "Need Hulu" and "Need Disney or Hulu" kinds of posts in the r/FreeMovieAccounts sub. One user posts, "Sexting to anyone who gives me Netflix."

Some research suggests that more than 75% of Generation Z and 63% of Millennials think password-sharing of streaming services is ethical.

This led to nearly a quarter (21%) of all 18-24-year-old viewers using at least one streaming service that they didn't pay for in 2017. Netflix, Hulu, HBO, Amazon Prime, Disney+ and Crunchyroll are some of the video streaming platforms that lose out on subscribers from non-household sharing.

The blatant password sharing and open requests on Reddit certainly offer a shockingly casual attitude among the sharing content streamers as well. In an analysis by Glenn Hower and Parks Associates, streaming providers lost around $550 million from shared accounts. "There has been this kind of cavalier attitude about it," Hower said. "It hasn't been a priority."

When it comes to r/IllegalLifeProTips, the group includes posts with "a tip that improves your life in a meaningful way by being illegal." To stay on the safe side, the sub also throws this into the description: "The stories and information posted here are artistic works of fiction and falsehood. Only a fool would take anything posted here as fact." Sure.

In subs such as r/Drugs, you will find plenty of people quitting drugs and just as many asking for advice on how to get started. The over 733,000 members of that sub pose questions such as:

I only have 3x 5mg endone/oxy and am wondering the best ROA and dose.

Would swallowing the 15mg be the best option?

What about swallowing 10mg, then snorting 5mg later on? (I'm a bit of a snorting fiend).

Will be consuming with the devils lettuce of course and I have Valium handy but will abstain for safety unless anyone can recommend a safe dose combo?

In the same sub, members post about how they prefer sex while on drugs, need to stop their antidepressants to feel the effects of getting high on coke, and being afraid of certain psychedelic trip experiences. Member oopsnocontext wrote:

"I've dabbled in a few different types of drugs. I've done psychedelics which I love but in an occasional sense. Coke was pretty boring and not worth doing again imo. Alcohol is the devil for me I cannot drink without violently throwing up so it's a no for me. I also take Adderall prescribed but that's entirely not recreational. But weed, omg weed is the love of my life."

In r/DrugNerds, many members discuss the safe combinations of specific chemicals and drugs. The sub r/highdeas is where people post the ideas they come up with while high.

Reddit shut down r/uncensorednews in 2018 after two posters were arguing over which of two different people groups (Jews and Muslims) were more dangerous to the United States. But it took more than racist back and forth. The thread diverged into threats of hunting each other down over the argument. That, apparently, crossed the Content Policy line as "content that encourages or incites violence." Many of the other posts were filled with racist jokes about minority groups and off-color comments.

Other subreddits that were shut down include r/beatingwomen, r/jailbait, r/deepfakes, r/GenderCritical, r/GunsforSale, r/Pizzagate, r/CringeAnarchy, r/ChapoTrapHouse, r/The_Donald and many others. Many of those subs were closed under the previous CEO, Ellen Pao. After closing some popular subs and firing community manager Victoria Taylor, Pao was replaced by Steve Huffman in 2015. A Change.org petition gained over 200,000 signatures to remove Pao because she brought Reddit "into a new age of censorship."

What did get more attention was CEO Steve Huffman editing Reddit comments that criticized him. Steve Huffman is a member of u/spez on Reddit and freely admitted, "Yep. I messed with the 'fuck u/spez' comments, replacing 'spez' with r/the_donald mods for about an hour." He told one user, "This was a case of me trolling the trolls for a bit."

When it comes to advertisers on Reddit, most are going to shoot for the subs that contain their audience and very straight-line content topics. Findlay Hats was able to jump sales by $28,000 from one viral Reddit post alone. That wasn't an ad but a story about the founder of Findlay Hats chasing down a hat he saw in the wild while in Italy.

Founder of Findlay Hats Jimmy Hickey said, "If you go at Reddit with a salesy approach, you will get down-voted. You will. Your message will not reach anyone. I think it's really important to just be interesting and genuine."

But not all brands realize how important that connection on Reddit is -- or where their ads are being placed. Traveler's Choice currently has a holiday ad right in the middle of the r/Piracy thread, oblivious to the Scrooges surrounding it that don't want to pay for products. 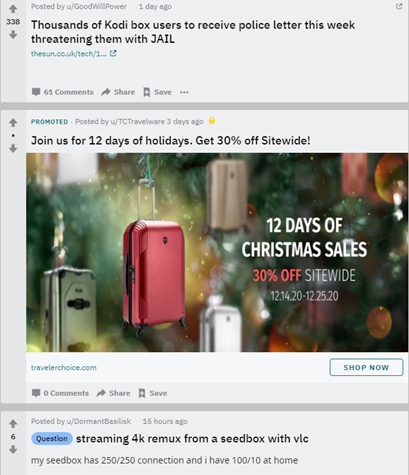 Scroll down a little further and the post shows Firstrade and My Rosin Press ads. In other subs, you can find ads from major brands such as Nespresso, Devour, ESPN and Oculus, with ads that don't vary much from content they post on other sites.

But some brands are trying to be hip and speak directly to the Reddit crowd. Classico asks Redditers to post their favorite recipes. Cheez-It even plays up its brand status by mentioning the sub dedicated to ridiculous ads (r/fellowkids). 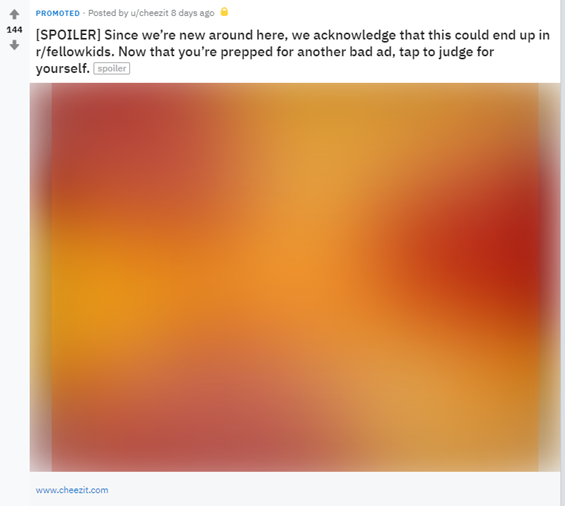 In the r/fellowkids sub, brands are posted with cringe ads that are working hard to be hip enough to "appeal to the radical youth" (as the sub puts it).

Click on the mature-looking content image and you get a harmless (and very cheesy) ad that did, in fact, get posted on r/fellowkids multiple times. 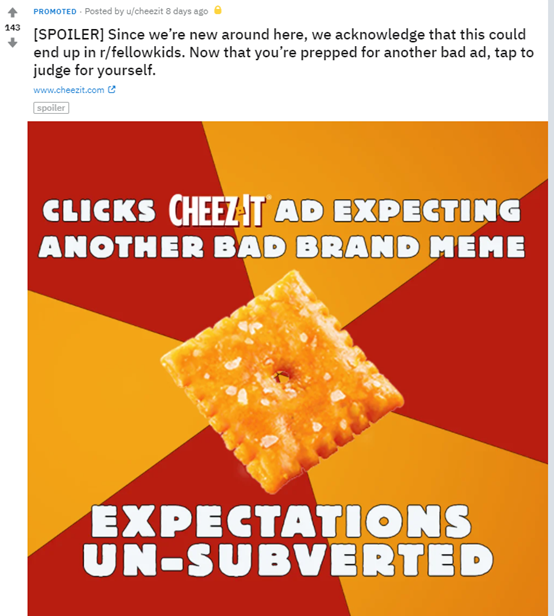 Maybe the better placement award should go to Sophos in the r/Piracy sub. The ad notes, "United States' Ransomware Attacks Doubled Last Quarter. We are here so you aren't next."

In a sub with so many questionable sites, antivirus software seems like a highly relevant offering.

Alethea M is a freelance writer with a background in marketing and advertising. She is mother to four and enjoys art, gardening, yoga and reading in her free time. She is a self-trained social medialite, starting with the earliest days of MySpace and Faceboo…