Univision Moves from Multicultural to Mainstream:  Upfront News and Views 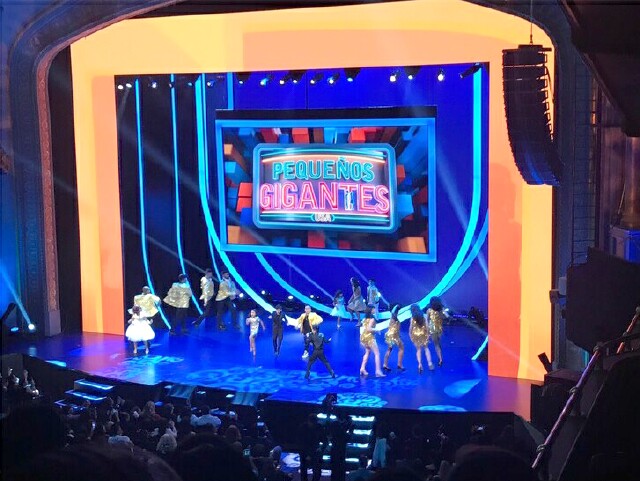 Last Tuesday, in the heart of Times Square, the Lyric Theatre was abuzz with advertisers and members of the press, eager to see what developments and new programming Univision Communications International (UCI) would reveal for the 2017-18 season.  The environment was, in a word, festive.

UCI President of Advertising Sales and Marketing Keith Turner greeted the audience after a performance by singer and actress Becky G, recent star of the movie Power Rangers.  He made it clear that Univision has been the leading Spanish broadcast network for twenty-four consecutive seasons and continues to grow, despite what competitors may claim.  “UCI is now driving 100 percent of all growth in the Spanish-language market,” he declared.

Executive Vice President of Ad Sales and Marketing Steve Mandala (pictured below) later noted that “the most valuable consumer group is U.S. Hispanics.” 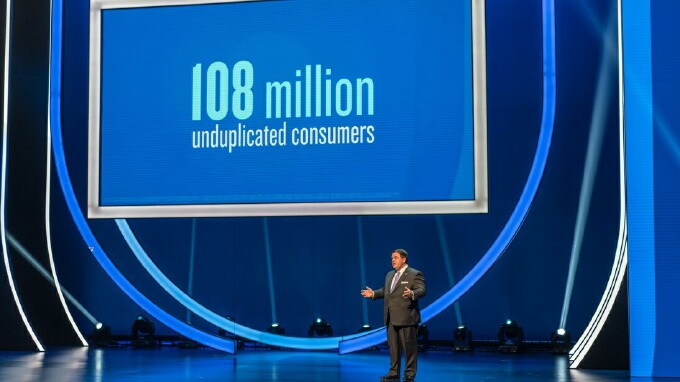 Together, Univision and UniMas out-deliver ABC, CBS, NBC, Fox and The CW among adults 18-34, making the combo the No. 1 place to reach Millennials regardless of language, Mandala explained, noting that Hispanic households are becoming increasingly more diverse, multilingual and tech-savvy.  He shared that UCI’s Galavisión is the No. 1 Spanish language cable network and that Univision also has the No. 1 news station “regardless of language” in New York, Los Angeles and Dallas.

One of UCI’s priorities going forward is the expansion of lifestyle network Fusion TV.  An impressive “creative board” including Chairman Henry Louis Gates Jr., Viola Davis, Meryl Streep, Jodie Foster and Ezra Edelman has been assembled to guide the franchise. Focusing mainly on pop culture, satire and news, Fusion TV is geared toward younger generations and uses multimedia platforms to showcase content including social media and YouTube.

Jessica Rodriguez, Executive Vice President and Chief Marketing Officer, joined Turner for the rest of the presentation, which focused on the five “passions” of the Hispanic audience – Sports, News, Family, Music and Drama.  “Passion” was at the heart of this year’s Univision Upfront, “Proof of Passion.”  The top takeaways follow.

Sports:  After an interactive video presentation, Univision Deportes President Juan Carlos Rodriguez came on stage to emphasize the ever-growing love for soccer.  The sport is a staple in nearly every Hispanic household with families crowding in the living room, clad in their favorite player’s jerseys, cheering loudly when their team scores and screaming at the referee when they think he made the wrong call.  Rodriguez said that Univision acquired the Spanish-language broadcast rights for one of the biggest European sports events of the year, the UEFA Champions League. Starting in the summer of 2018, the global soccer event will be telecast exclusively in Spanish across Univision, UniMas and Univision Deportes.

News:  Hispanic news icons Jorge Ramos and María Elena Salinas (pictured below) came onstage to an uproar of applause.  Ramos and Salinas have become two trusted voices among the Hispanic audiences in the U.S. who have the desire to be told real news without any hidden political or personal agendas. One of UCI’s latest news endeavors was the creation of Edicion Digital (Digital Edition), an interactive, multi-media news show geared toward Millennials and younger audiences.  Rodriguez stated that the Hispanic audiences of their news programs are an average of sixteen years younger than that of English-language news shows. 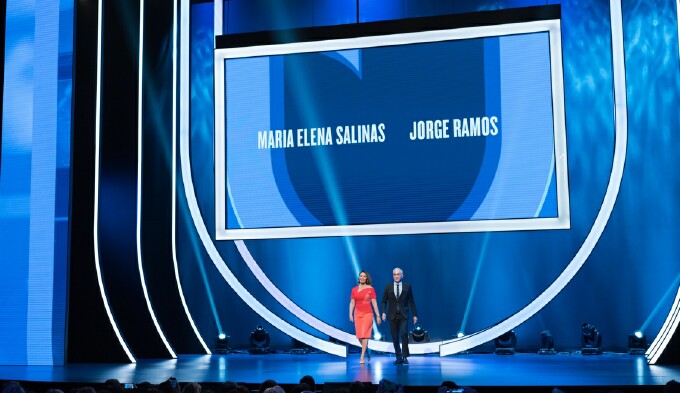 Family:  UCI's new President of Entertainment, Lourdes Diaz, then took over the presentation to introduce new shows and returning series that are geared toward family audiences, somewhat stepping back from primetime telenovelas and dark dramas.

A new series premiering later this year is Tu Cara Me Suena(Your Face “Sounds”’ Familiar) where well-known celebrities undergo rigorous music and dance training and intense makeovers to impersonate entertainment icons and perform live.  Mira Quien Baila (Strictly Dancing) is a returning dance competition series in which a Hispanic celebrity is paired with a professional dancer to go through weeks of themed performances and judged by a panel of dance industry professionals.

2017 saw the inaugural season of Pequeños Gigantes USA (Little Giants USA) a children’s talent competition that was the first endeavor to create more family programming for Hispanic audiences.  The stage was then overtaken by performers and winners of this past season, dancing and singing their hearts out (pictured at top).  Pequeños Giganteswill return for its second season.

American Idol and The X Factorexecutive producer and judge Simon Cowell will serve as the executive producer of the new family game show A Jugar en Familia(Keep It In the Family) in which families compete against each other in a series of physical challenges in front of a live audience.

Latin pop band MIX5, winners of Season 2 of La Banda (The Band) then took the stage to perform a song from their latest album, after which Diaz announced the third season of the hit singing competition series that creates new Latin entertainment groups.

Nuestra Belleza Latina will return under the new name NBL Belleza Total (Our Latin Beauty: Total Beauty), continuing its mix of a beauty contest and reality television as contestants prove they can break the barriers of society’s standards of beauty.

Music:  It was announced that the biggest music events of Hispanic television will be moving to Sunday evenings, much like the Oscars, the Emmys and the Tony Awards. The Latin Grammysand Premios Lo Nuestro are among theses award shows.

The remaining contestants of the latest music show La Reina de la Cancion(The Queen of Song) took the stage and performed together, with powerful vocals and incredible range.  La Reina de la Cancion is a new music competition show seeking the next big Regional Mexican star.  The series premiered with strong ratings and is telecast Monday through Thursday at 8 p.m.

Several music-based series are coming to Univision this season including Luis Miguel: El Sol de Mexico, a drama series based on the life of Hispanic music icon Luis Miguel and his difficult upbringing with his father/manager whose alleged poor financial decisions put his earnings at risk from a young age.  Barrio Records focuses on the popular music genre reggaeton, following the events at the title music label, its artists and the dark going-ons of the producers and brokers.

Drama:  Univision and Netflix were quick to announce the second season of El Chapo, a dark, criminal drama centered on one of the most notorious Hispanic criminals that we just can’t seem to get enough of.  (MediaVillage.com critic Ainsley Andrade has something to say about it.)  The second season continues the story of Joaquin Guzmán, otherwise known as El Chapo, and his rise to notoriety and his eventual downfall.

Univision has always been known for its one-hour telenovelas and dramas, and this season is introducing some more family-oriented dramas including La Tierra Prometida(The Promised Land) a sequel series to the popular Los Diez Mandamientos(The Ten Commandments).  Dramedies coming this year include Mi Marido Tiene Familia?(My Husband has a Family?), about a young woman who has problems with her erratic family and happily marries a man who was adopted and has no family – until he finds his real family and invites them to visit.

Papa a Toda Madre (The Mother of All Dads) follows the story of a young bachelor and businessman (played by telenovela superstar Sebastian Rulli) who meets a 9-year-old girl who claims to be his daughter. This thwarts his plans to marry into wealth and save his family’s business.

Amar Despues de Amar (To Love After Loving) described by Diaz as a “sexy thriller,” follows two families whose lives collide when a tragic car accident reveals a love affair between the father of one family with the mother of the other.  When the father falls into a coma and the mother goes missing, suspicion of a possible murder arises, causing more questions to arise than answers. 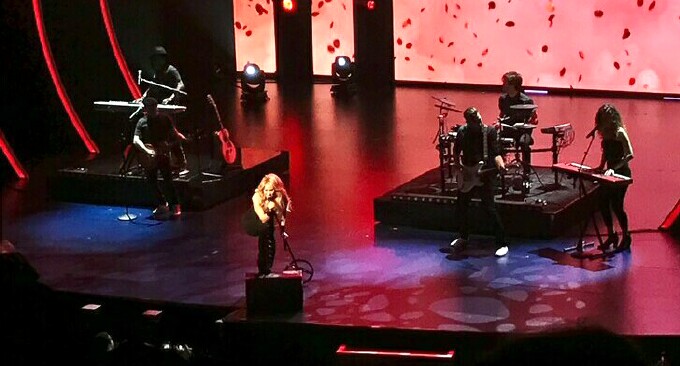 As is the Univision tradition, the event concluded with a mini-concert by a giant superstar.  This time around the performer was Shakira (pictured above).  She powered through several songs from her new album, ensuring that the audience left on a high note.