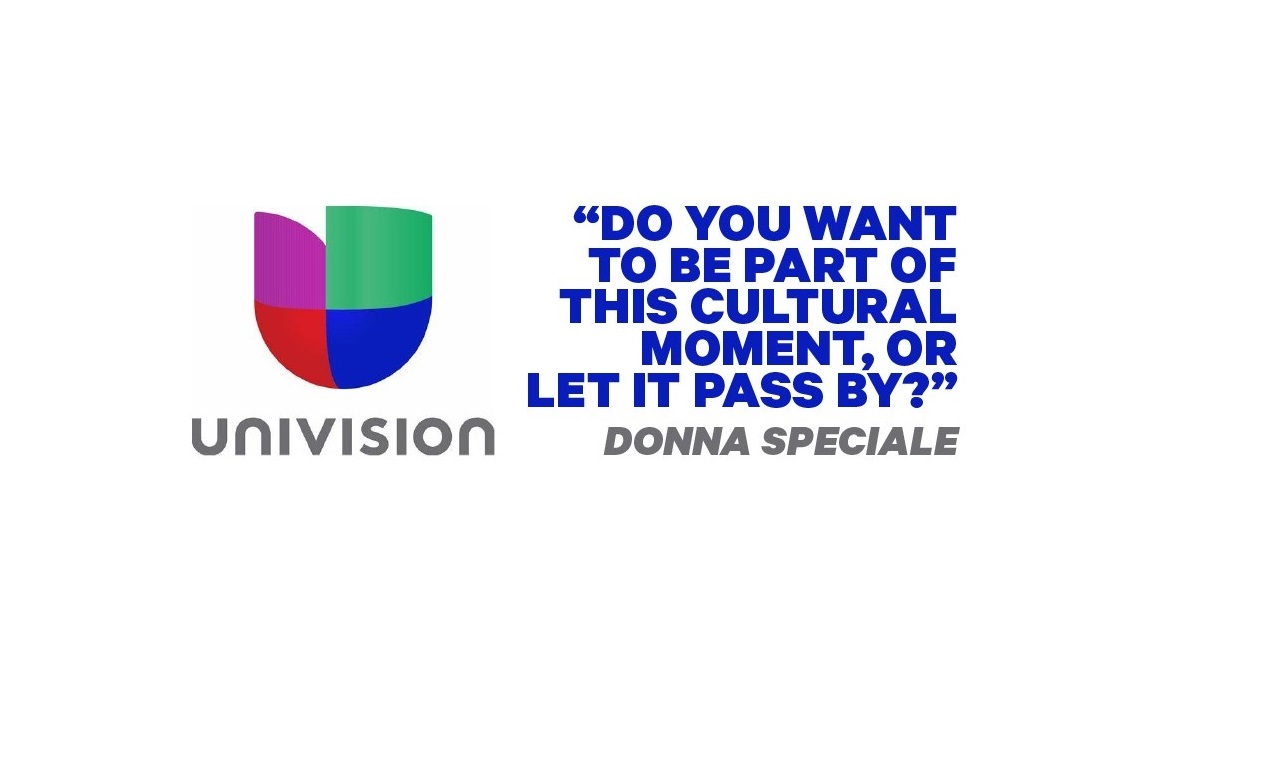 Spanish-language media force Univision last Wednesday became the latest TV programmer to adopt the multi-presentation approach to this year's Upfront season, with the first of two virtual events. What unfolded was, at times, peeks into the mindset of Univision's new executive leadership, and at others, coupling an appeal for advertiser support with blunt criticism for companies in various product/service categories that avoid Latino media buys.

The Big Message: Univision is ready to leap forward and go from a leading domestic Spanish-language TV force to a global Spanish-language TV superpower, beginning with next week's launch of PrendeTV, the first U.S.-based mega-content/multichannel bundle venture in Spanish, distributed through smart TV sets and devices. What's more, PrendeTV's launch will be followed in timely fashion by big developments in both content and advertiser opportunities for all Univision TV platforms. "We'll make investments in Spanish-language content like you've never seen," declared new Chief Executive Officer Wade Davis. "We will modernize and supercharge."

Hosts: Davis -- in one of his first on-camera appearances since starting at Univision earlier this year -- and Donna Speciale, the former WarnerMedia ad executive fresh into her new role as the company's president of ad sales and marketing. Both delivered their remarks in no-nonsense fashion, with Speciale injecting some humor about getting up to speed. "I've been (learning) my Spanish on Babbel, and trust me, we have a long way to go," she said.

What Worked: A half-hour presentation that gave Univision's top executives maximum time to introduce themselves and their aspirations for the future. Good move to note in passing other key executives not appearing on-camera, and off the bat, invite sponsors to participate in late spring or summer attractions on various Univision services, such as 100 soccer matches packaged as "Summer Of Champions" on sports network TUDN. "Be on the journey with us from day one," Davis exclaimed.

What Also Worked: Speciale's criticism of advertisers who remain apathetic to any Spanish-language TV participation. "Politicians can't win without this audience (now more than 60 million people across the U.S.) and brands can't, either," she insisted. "(Advertising to this audience) must be a business imperative, not nice-to-know." At one point, Speciale called out pharmaceutical companies for not buying time, especially in light of the coronavirus pandemic, while offering graphic testimonials from Nestle and other companies labeling Latinos as a "fundamental" audience for any ad campaign. For a change of both pace and mood, two entertainment segments kicked in -- a mini-salsa shine lesson from the hosts of popular Univision weekend series Mira Quien Baila, and a closing bachata production number from long-running (and top-rated) annual awards presentation Premios Lo Nuestro.

What Didn't Work: Prende TV's sizzle reel showcased the wide variety of initial content viewers can see and did little else. Could have taken a few minutes to highlight some original series or specials running the first month or two.

News: PrendeTV will begin with 45 channels and more than 35,000 hours of acquired content, increasing to more than 100 channels by the end of the year. Ten sponsors have signed on so far, including Dunkin' Donuts, Verizon, Eli Lilly, Toyota and Clorox. A $100 million marketing campaign will begin next week. Details on programming made for Prende and special ad opportunities beyond commercials are expected to be unveiled at Univision's second Upfront event mid-May. Mothership network Univision will premiere a Mother's Day special later this spring connected to the annual Latin Grammy Awards, and this fall will expand its weekday morning multi-hour Despierta America(Wake Up America) program to Sunday mornings. Despierta celebrates 25 years on the air next year.

Parting Words: "Our objective is to amplify and expand the reach and power of this platform. We will take Univision to be the global leader in Spanish-language media." -- Wade Davis