Univision's "Papa a Toda Madre" Is a Breath of Fresh Air 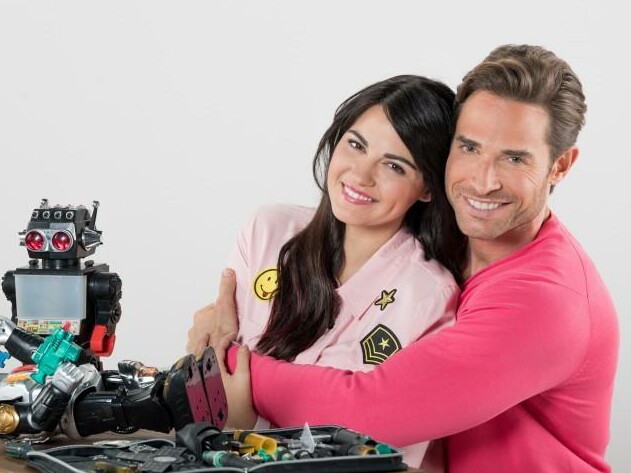 Univision's latest telenovela, the charming and witty Papa a Toda Madre (Mother of All Dads) is a much-needed breath of fresh air. Telecast weeknights at 9 p.m., it is a one-hour dramedy from creator Pedro Armando Rodriguez who also served as producer alongside Rosy Ocampo.  (The two previously worked on Univision’s La Doble Vida de Estela Carillo,Mexico’s No. 1-rated novela.) Papafollows wealthy womanizer Mauricio López-Garza, owner of his late mother’s toy company Logatoys.  Despite repeated warnings by his right-hand man Fabrizio, the headstrong Mauricio continues his reckless spending and luxurious lifestyle -- which eventually lead him and Logatoys close to bankruptcy.  He soon falls for a beautiful woman named Miranda who, like him, despises children -- and much to his benefit, she is the daughter of a wealthy investor.  In no time at all the cad plots to marry her in order to save the company.

Meanwhile, young Renée, a college student and engineer at Logatoys, is also enjoying a new romance. Though she is beautiful, headstrong and independent, she has had terrible luck with relationships as the men she’s been with carry the "machismo" and expect women to play certain limiting roles in a marriage. Her luck seems to change for the better after she graduates from school and starts dating Alejandro, a handsome and charming fellow with whom she has shared goals.

These two new romances soar, only to crash and burn months later at the very same time. On Renée and Alejandro’s wedding day, Renee learns Alejandro’s true feelings about her career and their future together and she calls off the union. As it happens, Mauricio and Miranda are also getting married on that same day -- but a little girl named Anifer abruptly interrupts the ceremony, claiming to be the groom's daughter.  Amidst the scandal, Miranda and her father call off the wedding, leaving Mauricio alone with Anifer.

Though the series mainly focuses on Mauricio, Papaexplores various aspects of fatherhood through a few connected supporting characters. Nerón is a mechanic at Logatoys and widower who decides to re-explore fatherhood when he and his younger girlfriend decide to have a child. Jorge, a stern lawyer, must take care of his two teenagers when his wife leaves him. Lastly, Toño is a computer engineer who assumes the role of homemaker when he loses his job at Logatoys and his wife provides financially for the family.

Like Jane the Virgin when it debuted four years ago on The CW, Papa is a heartfelt dramedy that stands out among network schedules saturated with bleak police procedurals, complex government conspiracy dramas, superhero sagas and done-to-death sitcoms. The series stars telenovela hearthrob Sebastián Rulli of Tres Veces Ana, Lo Que La Vida Me RoboandPasiónfame as Mauricio and Maite Perroni of Cuidado Con El Angel and Triunfo del Amor as Renee.  Perroni is also a Latin pop star and her song “Loca” was featured in the opening of Papa.

Rulli portrays Mauricio with a Tony Stark-like self-centered and overly confident demeanor, which at first makes Mauricio a not-so-likeable character, but his good looks carry him a long way. When Anifer enters his life, he soon warms up to her and finds a new love for fatherhood, which he plays with sincerity and charm.

As the independent and driven Reneé the multi-talented Perroni does not disappoint, bringing strong emotion and a sense of groundedness to the hilarity to the show. Regina Graniewicz makes her winning television debut as the adorable yet mischievous handful Anifer.

During the early episodes of Papa the fast-living Mauricio and the hard-working Renee hardly interact as their individual storylines are fleshing out and developing, but you would have to be very naive not to believe that they will soon become more involved with each other in the aftermaths of their failed attempts at marriage. (Plus, the publicity photo at top is something of a giveaway.) That's hardly a spoiler; indeed, it's as good a reason as any to watch and enjoy waiting for the inevitable to happen -- not unlike the pleasures to be had by indulging in movies on Hallmark Channel.

Papa a Toda Madre is telecast Monday through Friday at 9 p.m. on Univision.