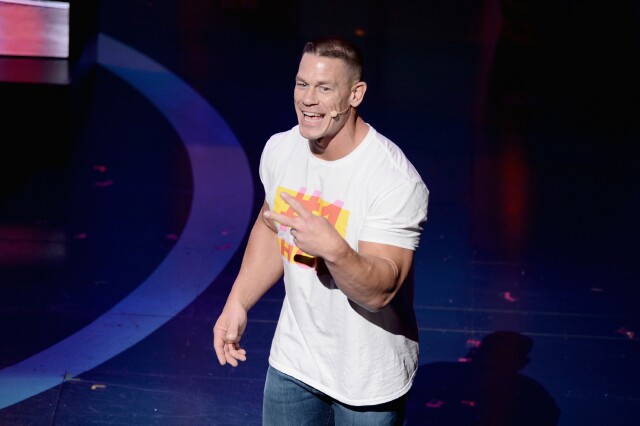 Three years ago, Nickelodeon kicked off the Upfront event season in New York City by announcing the development of its first Broadway-bound musical.  You could say what transpired last Wednesday on stage one of Upfront season 2018 was a classic case of what comes around, goes around.

Venue:  Palace Theater, on the corner of Seventh Ave. and W. 47th St., the home of SpongeBob SquarePants: The Broadway Musical. This lively live-action rendition of Nick's longest-running animated series opened to rave reviews last fall.  The local buzz suggests SpongeBob will be an odds-on contender for several Tony Awards this June (nominations will be announced in May).  Attendees walked into a colorful undersea wonderland (once they got past the "Bikini Bottom" merchandise displays in the lobby), serenaded by a band playing Hawaiian-style music to the right of the stage.  A big screen behind the stage featured small waves of water and the occasional fish moving from one side to the other.  Grade: 4.5 Jacks

Presentation:  Three messages were emphasized from start to finish, mostly through Nickelodeon Group President Cyma Zarghami.  The network will serve up more programming, serve that programming up through a variety of platforms (including smart TVs and TV-connected devices) and enter some new promotional venues over the next 12 months.  "We're out to follow our audience to anywhere they want to go … on any platform," Zarghami declared.  At every opportunity, video clips were deployed to elaborate on a new undertaking.  There was never a dull moment. Grade: 5 Jacks

News:  More than 800 episodes of new and renewed series will be produced and offered during the 2018-19 season. That's a 20 percent increase from the current season.  The breakdown: more than 300 episodes for the Nick Jr. preschool lineup; 300-plus live-action episodes and 200-plus toon segments.  New live-action series include Knight Squad (heroes-in-training comedy) and Keep It Spotless  -- a game show executive produced by WWE superstar John Cena (pictured at top)).  Leading the animated newcomers: Los Casagrandes, a spinoff of The Loud House featuring a Latino family, and buddy comedy Pony (buddy as in girl and talking animal).  In one Nick Jr. announcement that elicited audience cheers, all-time fave Blue's Clues will make a 20-episode comeback with new host and adventures.  Production starts this summer.  Separately, Viacom's digital studios unit will start making Nick-specific short-form series, starting with 10 episodes of Nick Cannon-created Musical Dares.  Grade: 4.5 Jacks

Host:  Zarghami zipped through her parade of announcements and talking points with ease, leaving no doubt she was having a good time on stage, Well-supported by Viacom Digital Studios President Kelly Day and Consumer Products overseer Pam Kaufman.  Grade: 4 Jacks

Star Time:  For starters, a pair of sensational numbers from SpongeBob SquarePants.  "Bikini Bottom Day," the show's opening tune featuring Etlan Slater as SpongeBob (doing toon voice Tom Kenny proud), led things off, while "Super Star Sea Savior," another first-act highlight, wrapped up the proceedings.  For this performance, gospel superstar Yolanda Adams (who co-wrote "Super Star") joined the cast and let her voice rip.  Point of disclosure: I have loved Adams ever since she performed for a Women in Cable breakfast at the Western Show wayyyyy back when.  She makes any stage rise to another level.  The big surprise came midway, when a Lip Sync Battle Shorties winner pumped up M.C. Hammer's "Can't Touch This," with kids both on stage and in the aisles working Hammer time to the max.  And for a running gag, John Cena parodied his expanded association with Nick, to the point of begging Kaufman to be the new host of Blue's Clues.  Give Cena credit for preparation, walking out with the classic blue notepad.  Grade: 5 Jacks  (If I could give the musical performances 10 Jacks, I would do so!)

Cuisine:  Served up at the after-party, taking place inside Edison Ballroom a block away.  Best delectable: crab/avocado sushi rolls, Caesar salad served on a lettuce leaf, and meat/fish and avocado buns.  Worst delectable:  teeny-weeny dessert bits on designated tables.  Did they have to be so small?  I did like the chocolate peanut butter cups with a pair of peanuts on top.  Grade: 3.5 Jacks (not included in the overall Jacks score)

Data Insight:  People of color will become the majority population in the United States by 2043.  The current population total includes more than 50 million children.  Grade: 3 Jacks

Innovative Opportunity:  Participation in the growing e-sports movement, through investment and sponsorship of Super League Gaming, a venture holding competitions around the country.  Teams of kids participate as amateur video game players and work through games with a high level of educational material.  Super League Chairman and Chief Executive Officer Ann Hand noted Nick's involvement during Activate, an e-sports forum for advertising at Sony PlayStation Theater (a few blocks away from the Palace Theater). Grade: 4 Jacks

Overall Grade:  4.5 Jacks Great, inventive mix of presentation and performance elements from beginning to end.  Many in the audience rewarded what they saw with a rare standing ovation.  This "Bikini Bottom Day" rocked … and we're just off the starting block of this season.