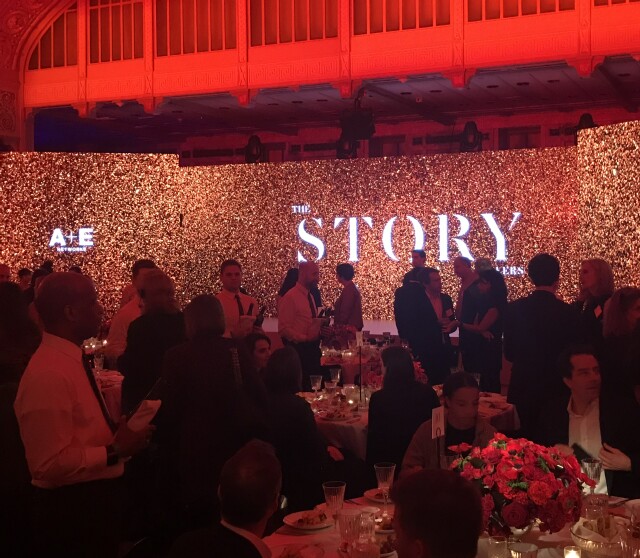 A+E Networks’ annual showcase last Thursday, highlighting a family of channels that includes A&E, Lifetime, History and Viceland, brought great excitement to week two of the 2018 Upfront event season.  For this go-round, A+E decided to go all out to focus on a range of contributions from women.

Venue:  The New York Public Library’s main branch on Fifth Ave. between E. 40th and 41st Sts.  Usually a stately and sedate place to hold events, the main lobby and the Celeste Bartos Forum room were turned into bright, sparkling spaces for a cocktail hour and dinner/presentation, respectively.  Both sides of the lobby became distinct spots for celebrity snapshots; a white paper-Mache background on the right, greenery of a rainforest nature on the left.  Orange lights brought a party glow to the Bartos room, with a long video stage to the right.  In something of an unexpected pre-show, workers decorated the outside steps to the lobby with signage featuring the night’s motto, “Step Up to Great Stories.”  Passersby on Fifth Ave. paused to capture the image on their smartphones.  When I left to head home at 9:15 p.m., the “Step Up” signage was still in place, still attracting picture takers.  Grade: 4 Jacks 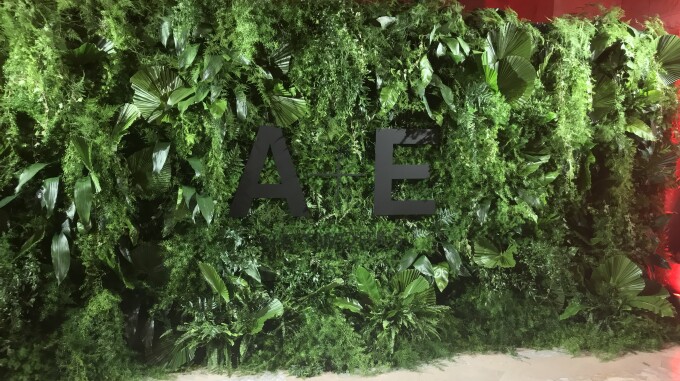 Presentation:  A testimonial approach, giving nine notable women the opportunity to express their involvement with various productions.  The group included attorney turned A&E host Marcia Clark, singer/actress Toni Braxton, actress/music star/entrepreneur Queen Latifah and craft brewer Meg Gill (from Viceland’sBeerland series).  The rousing ovation of the night came early on for Abbe Raven, back as interim Chief Executive of A+E (replacing Nancy Dubuc, who is moving as CEO of Vice Media next month).  “Women are leading (here),” Raven told the audience.  “This is one of the most powerful portfolios in all of cable.”  All of the speakers coming after her in one way or another cited the company’s willingness to bring important subjects and underrepresented communities to the screen, whether in scripted or unscripted fashion.  Six co-star Olivia Munn (pictured at bottom) added that A+E showcases women as multi-dimensional.  “We have to be more aware of the socio-impressions we put out in the world,” she declared.  “I’m unapologetic for being strong, and for being smart.”  Grade: 4 Jacks. 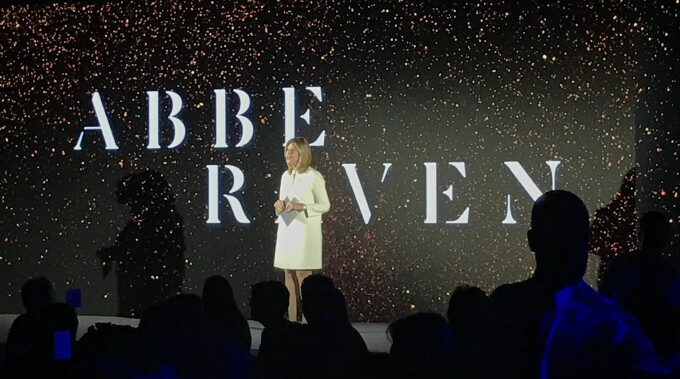 News:  Lifetime delivered both scripted and unscripted news.  On September 9, the long-awaited new adaptation of the classic chiller The Bad Seed will debut, followed by the launch of new relationship drama series You from Sera Gamble and Greg Berlanti.  Oscar nominee Patty McCormack (the played the title character in the original 1950s play and movie) will play the psychiatrist who treats this version’s killer child.  Braxton, who starred in the recent made-for film Faith Under Fire, will do more original flicks for the network, starting with a holiday season production.  Latifah has two specials in the works:  Where Did the Women of Hip-Hop Go? and a look at a new rendition of her breakthrough rap song U.N.I.T.Y.   Over on History look for History 100, a collection of 100 original documentary specials capturing landmark events over the last century.  History also will go live July 8 for a three-hour recreation of stunts by motorcycle legend Evil Knievel.  On A&E, Born This Way, Live PD, Intervention and Leah Remini: Scientology and the Aftermath will return for new seasons this fall or winter, joined by series newcomers Many Sides of Jane, Lost For Life, The Accusedand Employable Me.  Grade: 3.5 Jacks 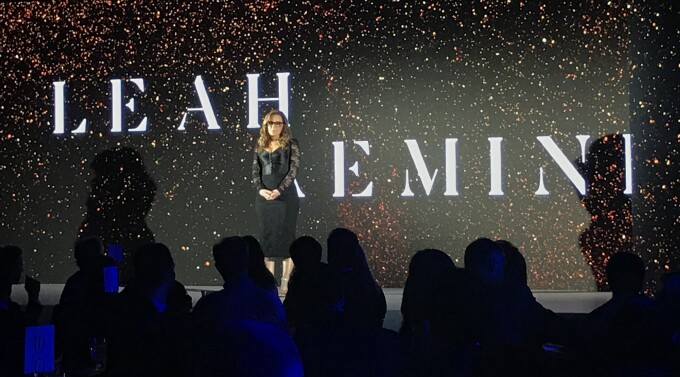 Hosts:  Each speaker stayed on engaging point, no matter what channel they were speaking about. Leah Remini, praised A&E for giving a home to her TCA Award- and Critics’ Choice Award-winning series.  “I’m one of the lucky ones,” she said, having been given the chance at a new life after Scientology.  Added Gill:  “I raise my glass (actually a beer can) to you.”  Grade: 4 Jacks 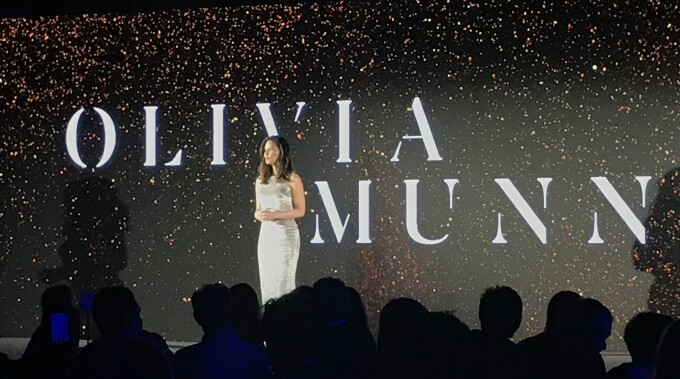 Star Time:  There were stars everywhere during the cocktail hour, including John Stamos, Olivia Munn, Leah Remini, Desus Nice and the Kid Mero, Dan Abrams and Penn Badgley.  A performance of the song “Save Me” kicked off the presentation.  Wish I could say who the female singer was, but she was not identified on the video screen.  Young girls joined her midway through for a modern dance sequence.  Grade: 3 Jacks 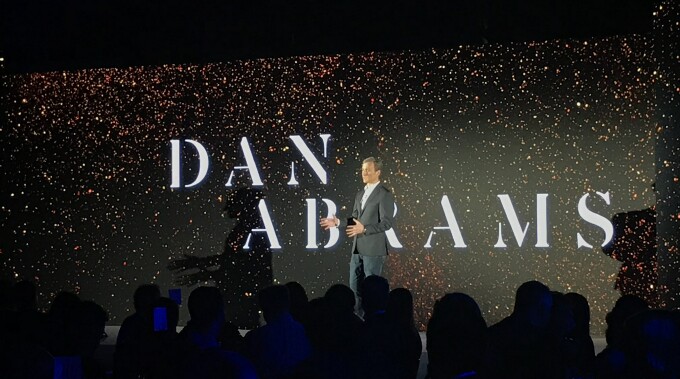 Cuisine:  A mixed bag.  There was a wonderful assortment of appetizers to nosh on during the cocktail hour, followed by two dinner entrees from which guests could choose.  Both looked extremely unappetizing.  Best eats: Peking duck wontons and Caesar salad bites.  Worst eat: the filet mignon served at dinner.  Grade: 4 Jacks for the appetizers, 2 Jacks for the dinner menu.  (Note: Cuisine ratings do not impact the overall Jacks score.)

Data Insight:  A+E, History and Viceland showed year-to-year increases in viewership, according to Executive Vice President of Ad Sales Peter Olsen.  More clarity on what viewer demographics were leading this charge and why would have raised this Jacks call.  Grade: 2.5 Jacks

Innovative Opportunity:  Utilizing results of an upcoming A+E research study concerning the impact content has on specific product purchases.  The study is expected to come out before summer.  Grade: 3 Jacks

Overall Grade: 4 Jacks  Nicely-paced salute to some of the women involved on-camera or off, taking place in a sparkling, yet intimate environment.