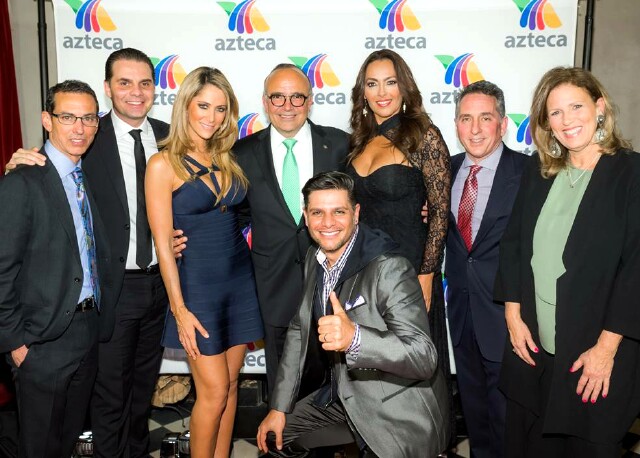 Until this year, Azteca America followed their Spanish-language network competitors in making their New York Upfront pitch in mid-May. Three things changed this year: Azteca presented in mid-April, its New York City event was the third stop of a four-city campaign (Los Angeles and Chicago events were held March 30 and April 5, respectively, with the “tour” wrapping in Dallas April 21) and it put on a smaller, far less flashy presentation.

Venue: Terrace of the Gramercy Park Hotel, located at 2 Lexington Ave. Bars at either end, with a modest presentation podium and monitor by one of them. It was standing room only, because there were no seats anywhere. The crowd didn't seem to mind, in part because of the great, clear New York skyline view off to one side. Grade: 3 Jacks

Presentation: The network is on a viewership roll, thanks to its focus over the last year on primetime weeknight counterprogramming. Rather than follow the other Latino networks with a telenovela-dominated lineup, Azteca instituted an hour-by-hour theme approach to programming -- game shows at 7 p.m., unscripted adventure competition shows at 8 p.m., newsmagazine "Al Extremo" ("The Extreme") at 9 p.m. and action dramas at 10 p.m. The counter course has pushed viewership up 41 percent among adults 18-49 and 44 percent among adults 18-34. "Our focus now is on four things -- growth, sustainability, evolution and you," declared Azteca President/Chief Executive Officer Manuel Abud (pictured at top center with Azteca personalities and executives). For 2016-17, the approach will stay as is, with some tweaks within the confines of specific hours. The video clips throughout were well-edited and peppy, each ending with the outcry, "Game On!" Grade: 3.5 Jacks

News: “Rabia”/”Rabid,” a thriller about a rabies outbreak which turns victims into unrecognizable creatures, will headline the 10 p.m. drama hour this summer or fall. “Ahora Caigo” will join the “La Hora Ganadora”/”Winning Hour” rotation, wherein 10 contestants solve crossword-like puzzles for cash and prizes. From the clip, it looks like it has elements of “The Cross-Wits,” “Who's Still Standing?” and “Russian Roulette” (the GSN series with those drop zones that losers fell through). “Desafio,” an endurance contest taking place on several continents, will be a new 8 p.m. attraction. Separately, Azteca's new in-house digital content provider Glassworks will partner up with advertisers for branded content running on the network, smart TVs, devices like Roku and Chromecast, and smartphones. Azteca will also launch programmatic ad sales, start date and other key specifics forthcoming. Grade: 2.5 Jacks

Star Time: There were no performances so there is no Jacks grade.

Cuisine: Appetizers galore, all in plentiful supply. Best chow-downs: rolled duck with pickled veggies, scallop on a spoon with tangy red sauce and yes, another pulled meat riff (the third in several weeks). Not pork inside a glazed donut this time. I had chicken in a bun, topped with crunchy Asian slaw. Worst chow-downs: None. All good! Grade: 4 Jacks (Note: Cuisine ratings are not counted in the overall Jacks score.)

Overall Grade: 3 Jacks Smooth demonstration of the network's accomplishments and ambition, delivered in an intimate setting. Would have liked to learn more about the weekend strategy beyond Mexican league and La Liga soccer, as well as overall content development for late 2016 and 2017.

News from the Passing Parade

Kudos to the 60 finalists for the 2016 Peabody Awards, including Amazon’s “Transparent,” ABC’s “black-ish,” HBO’s “Veep” and the feature film “Beasts of No Nation.” We'll learn who the 30 members of Peabody's 75th best-of-the-best in media class are over the rest of April. It will be an extremely tough call among the Peabody judges. Personally, I’m very sorry ABC’s “American Crime” didn't make the cut. It should have. Period.

Next up: Contrasting views on what should dictate Upfront sales -- the content or the audience -- via a Cadent Network forum.