Upfront News and Views: Bet On the Blockbusters, Says Screenvision

By Simon Applebaum May 14, 2018 Upfronts/NewFronts Archives 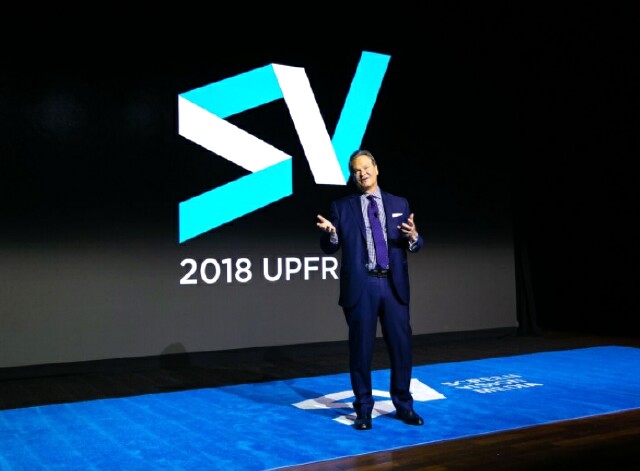 Screenvision Media has fostered a tradition of using the Thursday before the grand finale week of Upfront events in New York to hold its annual presentation.  True to form, the company, whose Front & Center pre-feature presentation now plays on more than 15,000 screens nationwide, was on display last Thursday evening.

Venue:  PlayStation Theater on the corner of W. 44th St. and Broadway for the second straight year.  As in 2017, the space was divided in half.  Attendees were seated in the upper half of the main floor to watch the presentation, then stepped into the lower half for food, drinks and special attractions themed to recent box-office hits.  Brief movie clips were inserted on the blue screen in the middle of the theater. Champagne and popcorn were served around the lobby.  Grade: 3.5 Jacks

Presentation: Year after year, the objective is to encourage sponsors to devote more of their overall ad budgets to pre-feature ads.  Now that theaters schedule blockbuster movies on a year-round basis (such as Star Wars: The Force Awakens, Star Wars: The Last Jedi, Spider-man, Wonder Woman, Avengers: Infinity Warand Black Panther), there’s a greater chance to reach audiences turning away from other media.  “Advertisers are trying to do more with less resources,” CEO John Partilla (pictured above) explained at the start.  “We reasonably represent that salve that can help you.”  Chief Revenue Officer Katy Loria and Executive Vice President of National Ad Sales Christine Martino used a trio of hit movie satires (It/Forrest Gump/When Harry Met Sally) to make points about how effective cinema messages can be with theater audiences.  “There’s butts, not bots, in our seats,” declared Martino at one point.  All three takeoffs had their funny moments, but the Sally homage (to the classic fake orgasm in the deli scene) had the most, thanks to the actress in the Meg Ryan role, and ending with that classic punch line.  Grade: 4 Jacks

News:  Fast-rising theater chain CMX (whose locations include the Mall of America) is Screenvision’s newest affiliate, and the “10 Pack” plan introduced last spring (running ads on a monthly basis before 10 specific titles) will continue in 2019.  What wasn’t announced: any enhancements to Front & Center itself, like launching a new series of featurettes or ad integration with current elements.  Ironically, a new short subject series was announced the week before -- Corner Stories (starting July 4 weekend), offering profiles of small business owners making a difference in their communities.  Great initiative; why wasn’t this brought up at the presentation?  Grade: 1 Jack

Hosts:  Loria and Martino make a standout pair, moving things along and poking fun at each other’s cameo appearance in those film sequences.  Partilla opened the proceedings in solid fashion.  Grade: 3.5 Jacks

Star Time:  No in-person celebrities, so no Jacks awarded.

Cuisine:  Nice selection of after-presentation treats.  Best eats: juicy Baha Mi chicken and lamb burgers, sweet potato and Yukon-style tater tots, and mini-bite chicken waffles.  Worst move: no ketchup or mustard at the burger/tater tots display.  You had to go over to the hot dog stand for both.  Also notable: A mini-arcade people could play before or after their food trip.  As a pinball machine fan, playing the Goldeneye 007 game was a nice touch.  Grade: 4 Jacks for the food; another 4 Jacks for the arcade.  (Note:  Cuisine ratings do not figure in the overall Jacks score.)

Innovative Opportunity:  Hate to belittle the point but talking Corner Stories or announcing another new Front & Center feature could have opened a path to some unique advertiser or theater chain relationships.  Look at what American Express’ Open unit has accomplished with its small business campaigns.   Grade: 0 Jacks

Overall Grade: 3.5 Jacks  Terrific presentation in both substance and pace (under 30 minutes), except for the omissions noted above.