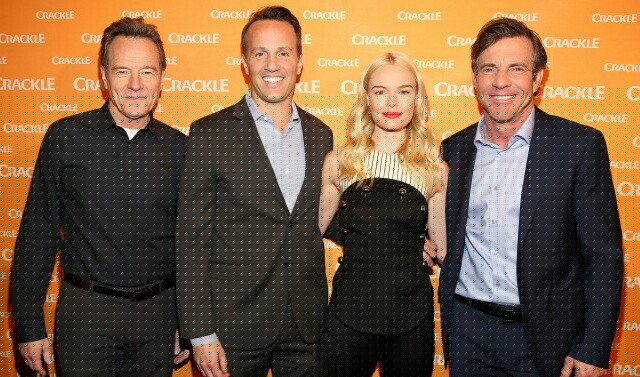 A year ago, Crackle became the first Digital Content NewFront player to separate from that over-scheduled fortnight and do its own thing at its own time. That remained the case last week, with the Sony-owned service now available over most smart TVs and smart TV-related devices. What's more, Crackle is expanding carriage through cable operators as video-on-demand programming, starting with Comcast.

Venue: New York City Center on W. 55th St., a performing arts space which only turns into Upfront central for The CW every mid-May. The setting here was far more sedate compared to a typical CW event. No multi-screen staging or unique musical talent welcoming attendees into the theater. Just an orange screen with the network's logo. The splendid architecture was generally left alone, except for ticket window displays inviting people to "Discover What Free Feels Like," or "Go to Your ____ Place." Words filling in that blank included “Happy” and “Inspired.” Coffee, tea, juice and water were served in the main lobby. Grade: 3 Jacks

Presentation: Most services key their Upfront presentations to explaining the rationale for new content or a new direction with content. Here, the focus was on how Crackle presents itself on screen, as in making the network more enticing for viewers and more impactful for advertisers by busting clutter. "People are doing everything they can not to watch commercials," touted Crackle general manager and Sony Pictures TV Executive Vice President Eric Berger. (Berger is pictured at top with Bryan Cranston of "SuperMansion" and Kate Bosworth and Dennis Quaid of "The Art of More.") "The better news: If you provide immersive experiences, people will give you both time and attention. We need to make a customer experience set in today's world." A video satire of comparable streamed services (think Netflix, Hulu, Amazon, CBS All Access, Seeso, etc.) using the characters from “SuperMansion” pushed the point. Grade: 3.5 Jacks

News: Two initiatives this fall kick off Crackle’s new presentation model. For the first, an original series (season two of “The Art of More”) will contain only five ad spots per episode (30-60 seconds) for all 10 episodes. Each participating advertiser will get one of those five spots, plus the option to create a running theme or storyline inside those spots, lasting up to 10 episodes. In addition, each spot will be combined with a season-long story arc involving that sponsor. Infiniti autos is the first participating client. The second is participation in virtual reality content via logos and custom-designed commercials. There will be an original episode of “SuperMansion” in VR format, and LG Electronics will create special footage (using its 360-degree cameras) for at least one new series. Two dramas will debut over the next year – “Start Up” (Miami-based intrigue among Millennial tech entrepreneurs) and “Snatch” (based on the Guy Ritchie movie). Also, “Sports Jeopardy” gets a second run on NBCSN beginning August 6 (including a two-week nightly showcase during the Summer Olympics from Rio). Grade: 3.5 Jacks

Hosts: Berger and his colleagues engaged the crowd, while cutting down the ratings performance segment that marred last year's presentation (due to an overload of tech term babble). Bryan Cranston, in his third annual appearance on Crackle's behalf, (here with his “SuperMansion” co-producers) always brings the funny.  “We didn't know when we started this would entail puppet nudity,” he said. “[Crackle] did, and they were very cool with it." One unique note during the actor testimonials came from “Start Up” co-stars Edi Gathegi and Otmara Marrero.  “I'm happy this series will deal with neighborhoods and sides of Miami which you don't see dramatized on TV," Gathegi pointed out. "We'll also show both true culture and true Cuban culture," added Marrero, who is Cuban. Grade: 3.5 Jacks

Star Time and Cuisine: No performances or food here, so no Jack grades. (Note: Cuisine – or the lack thereof -- does not factor in the overall Jacks rating.)

Next up: BET Networks