By Simon Applebaum May 19, 2016 Tomorrow Will Be Televised Archives 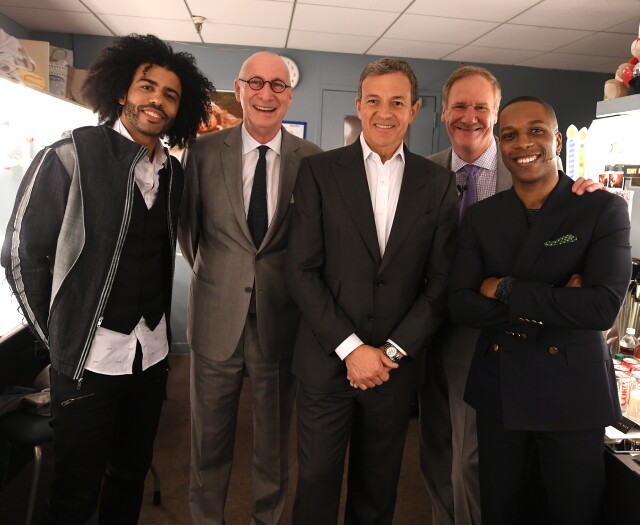 It wouldn't have been the Tuesday morning of Upfront week without ESPN giving its regards to Broadway while appealing for advertiser support. But this was something special. In between two "Hamilton"-inspired performances at the NBCUniversal and CBS Upfront events, ESPN delivered entertainment from two of its Tony-nominated stars, Daveed Diggs and Leslie Odom Jr. (Diggs, ESPN President and Disney Media Networks Co-Chairman John Skipper, Disney CEO Bob Iger, ESPN Global Sales and Marketing President Ed Erhardt and Odom Jr. are pictured above.)

Venue:  Minskoff Theater at 200 W. 45th St., three blocks from Times Square. Most days, it's home to "The Lion King." For ESPN, it's where sports superstars turn out on stage and a mix of team mascots and pro cheerleaders hobnob in the lobbies. Spotted a Villanova Wildcat near one hot tea bar as a Syracuse Orangeman passed by. Another mascot looked down on my note-taking at one point, as if to crumple any negative writing on sight. The Laker Girls were all over the place, including the street-level entrance where they were signing autographs. Inside the theater, a DJ was spinning tunes, while now and then social media correspondent Sarina Morales and "SportsCenter" reporter Reese Waters recollected their favorite sports moments from stage left to anyone paying attention. Grade: 3.5 Jacks

Presentation: No big deviation from the formula ESPN relies on year after year at this revue-style showcase: Devote the majority of time to quick star interviews by on-air talent and bridge those segments with executive remarks, sponsor testimonials, one or two new project announcements and lots of highlight video. The talent end held up with baseball superstar Bryce Harper, NBA point guard Chris Paul, 2016 NFL Hall Of Fame inductee Brett Farve and New York Mets pitcher Noah Syndergaard. The big executive pitch: In an age of more viewer choice and more platforms for viewers to watch their choices of content, ESPN remains a durable and nimble advertising vehicle. "We are a place where advertisers thrive," enthused Global Sales and Marketing President Ed Erhardt. Video testimonials from Mennen's Speed Stick brand and Voya supported that argument. If viewers don't see ESPN in linear fashion, they're hooked into the Watch ESPN app that's getting more viewing via smart TVs and smart TV-making devices. Senior Vice President of Multimedia Sales Wendell Scott noted that 60 percent of ESPN's live-streamed activity is through smart TVs and devices. "The audience [making up that 60 percent] is culturally diverse," Scott added. "Who in this audience doesn't want that?"  Grade:4 Jacks

News: Professional hockey, absent from the channel's schedule for years, will return this September with coverage of the semi-annual World Cup of Hockey. Coverage of the Winter Games from the International Special Olympics will debut on ESPN next February. Not announced on stage: Watch ESPN distribution in Google's Android TV format, immediately covering various Sony and Sharp TV sets, and NVidia's Shield plug-in device. RCA and Phillips will introduce Android TV with Watch ESPN later this year. Grade: 2 Jacks

Hosts: Every ESPN executive involved made a solid contribution, while the on-air talents used their spotlight time well. New "Monday Night Football" play-by-play person Sean McDonough did a fine interview with Farve. Noting that one of "MNF's" early games this fall will be the first played in Mexico, McDonough appreciated the timing. "There won't be any [giant] walls to climb," he said.  Grade: 3 Jacks 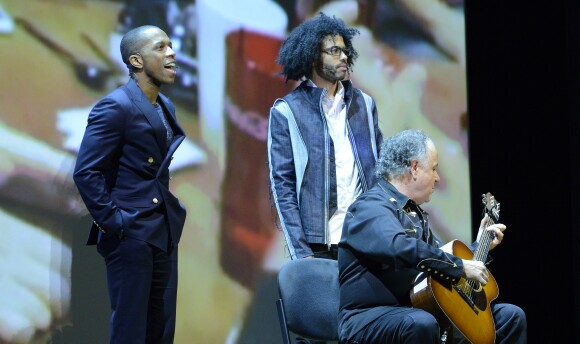 Star Time: "Hamilton" co-stars Daveed Diggs and Leslie Odom Jr. performed original material to open and close the proceedings. Against a starry sky backdrop, Diggs and Odom Jr. mixed rap and song to praise the nature of people at their best. For the close, they stood side-by-side behind guitarist Arlen Roth to acknowledge the glory of athletes as a highlight montage unspooled. Both numbers were poetic and deeply moving. (Odom Jr., Diggs and Roth are pictured above.)  Grade: 4 Jacks

No segment on ESPN Deportes, contrary to a number of press reports late last week. No mention or video in passing whatsoever. The absence was especially glaring with Deportes cancelling its annual Upfront event, held on Wednesday mornings from Hearst Tower the last few years. In a post-presentation meet with journalists, ESPN President John Skipper said the Deportes segment was pulled on late notice, and that call does not reflect how well that channel is doing. "The audience for Deportes is up dramatically this year," Skipper said. "We're fully committed to Deportes."

With "SportsCenter" taking up more time on ESPN's schedule, don't expect any shift in format for sister network ESPN News. Skipper maintained the service will continue its headline/highlights scenario, interrupted at times for run-overs of ESPN/ESPN2 events or news coverage.

ABC's Jimmy Kimmel may be the reigning comic of Upfront week year after year, but I'll argue he has competition from ESPN sportscaster/satirist Kenny Mayne. Big data was the target of the Mayne-meister last year. "What the hell happened to that?" he asked attendees. This year, his aim swerved to viewability of content, with an inferred dig here and there to Netflix. "You binge-watching, consuming bastards! You're ruining our business!" he cried while the audience roared.

The opinions and points of view expressed in this commentary are exclusively the views of the author and do not necessarily represent the views of MediaVillage.com/MyersBizNet, Inc. management or associated bloggers. Images courtesy of ESPN.