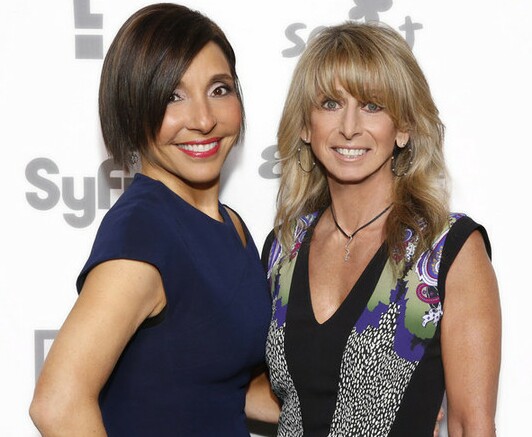 CBS, NBC, ABC, Fox and The CW may have dominated Upfront Week 2015, but ESPN, Turner Networks and the networks of NBCUniversal Cable Entertainment produced grand events as well. Here are our takes on each of them.

Venue: Minskoff Theater near Broadway and Times Square. This annual breakfast-time event wouldn't be what it is without college and professional team mascots or cheerleaders greeting all comers all over the space. Or, once inside the theater, the pre-game show being staged in a box off to one side, hosted for the second year by "His & Hers" co-hosts Michael Smith and Jemele Hill (wonderful). Grade: 4 Jacks

Presentation: Various riffs expanding on this year's motto, "The ESPN Impression." "All impressions are not equal," declared Global Customer Marketing/Sales President Ed Erhardt. "The experiences matter and real audience passions matter. Fans don't see the lines between TV, radio, digital or mobile. They just see us. While other (networks) are sharing about the challenges they're faced with, we're sharing growth." Executive Vice President Eric Johnson picked up the point other programmers have made this Upfront season about the value live viewership continues to hold in an era of DVRs and binge-watching. Meantime, leave it to ESPN anchorperson/pundit Kenny Mayne to blow the big conversation about Big Data throughout this event period wide open, and Sunday NFL Countdown contributor Frank Caliendo to break everyone up with his Jon Gruden take – right next to Jon Gruden! Grade: 4 Jacks

News: Scott Van Pelt will take over the midnight/Eastern time "SportsCenter" as solo host late summer, emphasizing more live guest interviews and commentary. Then next February, "SportsCenter" will launch a two-hour morning block from 7-9 a.m. Eastern time, formatted after the popular "Top 10" highlight recap on other editions. The launch will be timed with a big move: ESPN2's "Mike and Mike in the Morning" will originate from above the "Good Morning America" Times Square studios – and the creation of an ESPN/ABC combo ad sales plan for messages on all three programs. ESPN also will simulcast its National Football League wild card game next January with ABC, a year after the NFL carved out that coverage window. Grade: 3 Jacks

Venue: Madison Square Garden Theater, home of YouTube's Brandcast event two weeks earlier. Coffee, bottled water and donuts served in the lobbies. Striking black-and-white backdrop on stage, consisting of all the Turner logos below the "Turn It Up" slogan. Personalities and celebrities from TBS, TNT, etc. were seated in the front rows. Grade: 3.5 Jacks

Presentation: With a unity equals strength approach, Time Warner's cable programming unit emphasized the ability to reach all demographics anytime on any platform. "Convergence has arrived," noted Turner Ad Sales President Donna Speciale. "Data and content have officially hitched … and we're prepared for this critical inflection point." A few sports motifs were sprinkled in, from Speciale and her colleagues introduced as a team by MSG's New York Knicks courtside announcer, to the event being framed by pre-game, halftime and post-game sequences handled by TNT's Emmy-winning NBA studio team of Ernie Johnson, Kenny Smith, Charles Barkley and Shaquille O'Neal (more on them below), complete with their catchy theme music. For an event billed as the coming together of all Turner nets, it was surprising that Adult Swim had a fair share of showcase time, but Cartoon Network and Boomerang (relaunched a few months ago with plans to have original series for the first time) had zip. Grade: 3.5 Jacks

News: Turner Networks dropped a ton. Both TNT and TBS will launch campaigns to double the number of original series by 2017. Moreover, each channel will swing to more adventurous drama and comedy concepts, respectively, with TNT skewing more female, promised Kevin Reilly, the former Fox/FX programmer now presiding over TBS and TNT. Up first in the Reilly era: "The Alienist," an eight-part mystery/thriller from "True Detective" director Cary Fukunaga and "Forrest Gump" writer Eric Roth. "ER"/"The West Wing" executive producer John Wells will make a pilot based on the family crime film "Animal Kingdom," while "Will," the young William Shakespeare effort under development at Pivot for two years (written by Craig Pearce of "Moulin Rouge" fame) comes over for another shot at series life. TBS will morph into a mix of comedy, animation, unscripted and sports via a brand reposition from the current "very funny," starting later this fall. Relationship game "Separation Anxiety" will join earlier-announced comedies "Angie Tribeca" and "The Detour" on TBS's fall schedule. Ensemble comedy "Wrecked" and Samantha Bee's new issue-oriented talk show will premiere in 2016. Also under consideration: Conan O'Brien-guided prospect "The Group" about people abducted by aliens. TruTV will extend its cutting-edge comedy format over the next year with at least two new series: investigative-minded "Adam Ruins Everything" and unscripted "The Driver's Seat." Coming early 2016 on CNN: "Race for the White House," narrated by Kevin Spacey, "Believer" and "United Shades of America," hosted by W. Kamau Bell. Grade: 4.5 Jacks

Host(s): Move over, Jimmy Kimmel -- you've got competition now when it comes to funny Upfront personalities. Johnson, Smith, Barkley and O'Neill kept the audience in hysterics throughout, thanks to the biggest burst of off-the-cuff commentary we've witnessed in recent years at any event. So plentiful and on-target were the laughs, no one seemed to mind that the show went overtime. Nice contributions from CNN anchorperson Anderson Cooper and Billy Eichner, whose "Billy On the Street" game-com moves over from Fuse to truTV in a few months. Grade: 5 Jacks

Overall Grade: 4 Jacks  Outstanding hosts, presentation focus and look. Had Cartoon Network and Boomerang received showcase time, instead of a few seconds of video clips, this would be have been a 4.5 or 5 Jack event.

Venue: Javitz Center's North Hall, same as last year -- and a nominee for most improved staging of 2015. A year ago, NBCUniversal used the whole space to seat the crowd, then had them empty into a backyard food/drink area that took forever to reach. The hall was divided in half this year -- seating at the north end of the hall, with the food/drink area taking up the south half, helped by white sofas and plenty of space for conversation. More than 160 celebrities participated on the red carpet next door, with E! doing a Web-streamed "Live From" special (well-handled by Maria Menounos and Ross Matthews). The stage had elements of IMAX and Cinerama, with videos and graphics extending around the crowd on both sides. Grade: 4 Jacks

Presentation: NBCUniversal Cable Entertainment Chairman Bonnie Hammer labeled her event one where "we show you, not tell you, our story." One by one, in true "coming attractions" style, USA, Bravo, E!, Oxygen, Esquire Network and Syfy served up a trio of new series videos, introduced briefly by Nick Cannon, Giuliana Rancic and Andy Cohen. Three notable deviations: NBCU ad sales chief Linda Yaccarino (pictured at top left with Hammer) announcing parent Comcast will allow usage of set-top box data from cable subscribers to help craft sponsor arrangements with all NBCU networks; a segment on World Wrestling Entertainment's "For the Hero in All of Us" campaign, and an elaborate song satire from performer Rob Cantor, accompanied by classical musicians, ballet dancers and choir. Another nominee for best Upfront musical number of 2015. Still, why no time for Sprout, given their major talent had front row seats and popular puppet Chica (of "The Chica Show") had a few seconds of clip time? Grade: 4 Jacks

News: USA showed off the sizzle reel of "Queen of the South," its adaptation of Spanish-language sibling Telemundo's hit novela "La Reina Del Sur," which received a series greenlight early last week. Alice Braga, who plays the title character, looks like a breakout star to watch. All the other highlighted series at this event were previously announced. Grade: 1 Jack

Host: Cannon, Rancic and Cohen were smooth if unremarkable throughout. Grade: 3 Jacks

Overall Grade: 3.5 Jacks  Different presentation approach, supplemented by outstanding graphic displays making the most of that IMAX/Cinerama look. Some revelations on series under consideration at these networks would have increased the Jack rating. And how about showing Sprout more love?

Next up: Univision, NBC's Latino networks and Azteca