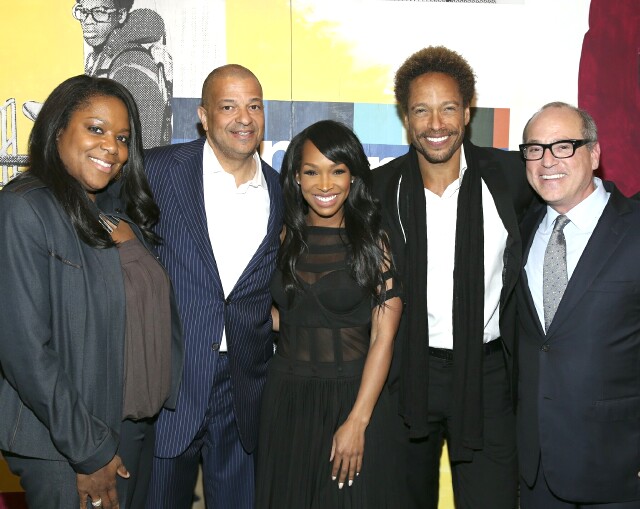 When TV One had its Upfront lunchtime event last spring, the network was in competition for attendees with Crackle, then breaking away from its association with the Digital Content NewFronts. For 2016, TV One made its presentation a breakfast affair, drawing a much bigger crowd.

Venue: Helen Mills Event Space and Theater, located at 137 W. 26th St. -- same as 2015. Once again, the right side of the room was turned into a display emblematic of the channel's message. Here, a mural showcasing African-American leaders and culture had blank spaces where attendees could write their answers to the question "How do I represent?" The podium and video screen were situated near a corner on the left side. Grade: 3.5 Jacks for the overall design; 4.5 Jacks for the mural and the opportunity for audience participation. (TV One Senior VIce President of Original Programming and Production D'Angela Proctor, Host and Managing Editor of "News One Now" Roland S. Martin, Malika Haqq of "Hollywood Divas," TV One Executive Vice President of Ad Sales and Marketing Rahsan-Rahsan Lindsay and Gary Dourdan and Miki Howard of "Love Under New Management: The Miki Howard Story" are pictured below in front of the mural.) 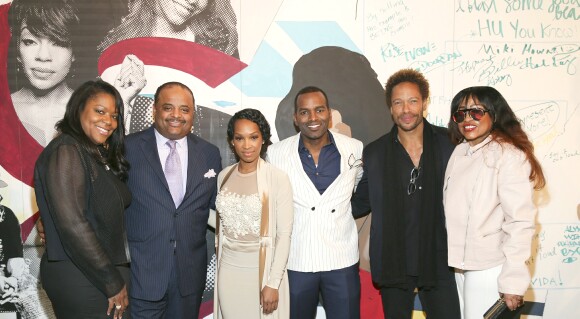 Presentation: Represent, as in offering viewers a new vision and tone with deeper relevance and needle-moving content, was the theme harped on at every chance. "We need as an adolescent network (in existence) to grow -- make big moves and defy expectations over and over and over again," reflected TV One President Brad Siegel. (Siegel is on the right in the photo at top with, from left, D'Angela Proctor, TV One CEO Alfred Liggins, Malika Haqq and Gary Dourdan.) From here on, original programming will stress authenticity of subject matter to its core audience and new behind-the-camera talent. One inventive video clip showcased current series and made-for movies as a "remix," accompanied by a female human beatbox. Grade: 3.5 Jacks

News: Original films will expand from a monthly attraction to 26 per year, 15 of them offered on a weekly basis from Memorial Day to Labor Day weekend. The films will cover six categories: true stories that matter (including “A Mother's Worst Nightmare: The Murder of Trayvon Martin”), bio-pics, suspense thrillers, love/relationships, inspirational/family tales and entertainment industry-focused projects. (One movie will depict a fictional media empire, another the friendship between legendary jazz singer Ella Fitzgerald and Marilyn Monroe.) At least one, possibly more, scripted drama series (the first for TV One) will premiere in 2017. No details were given on the future of scripted comedy, with two half-hour series now running (“Born Again Virgin” and “Here We Go Again”). Upcoming unscripted series include “Sneaker Pawn” (young sneaker store mogul in New York), “Family Bond” (North Carolina-based family of bail bond agents), “The Dating Games” (contestants playing from home guess how dates filmed with hidden cameras will turn out) and “Thou Shalt Not” (true crime series with a Ten Commandments theme). Grade: 3.5 Jacks – which would have increased to 4 or 4.5 Jacks with more details on the drama and comedy series plans.

Hosts: Siegel and programming/production Senior Vice President D'Angela Proctor kept things moving with a few humorous asides. With the network's acquisition of “Empire” reruns the afternoon before, Siegel invited the ad crowd watching to pull out their checkbooks.  "We'll sell the ad time at a discount from what Fox is selling,” he said. “The beauty of our deal is you don't have to wait four years for this epic show to come here." “News One Now” host Roland Martin threw in a quick promo for his daily series.  "There's a huge difference between ‘Morning Joe’ and ‘Morning Ro.’” Grade: 3.5 Jacks

Star Time: No performances, so no Jacks awarded here.

Cuisine: Breakfast on a pizza, as in breakfast toppings for pizza served family-style. Best chow-down: Nutella-spread slices with banana chunks. Others in the crowd appreciated the salmon-smothered slices. Worst chow-down: No nominees! Biggest accomplishment: Unlike last year, the waiters this year were not distracted as Proctor detailed new projects. Grade: 4 Jacks (Note: This category does not count in the overall Jacks ratings.)

Photos courtesy of TV One. The opinions and points of view expressed in this commentary are exclusively the views of the author and do not necessarily represent the views of MediaVillage/MyersBizNet management or associated bloggers.