Upfront News and Views: IFC Brings the Funny, the Sketchy and the Shirtless 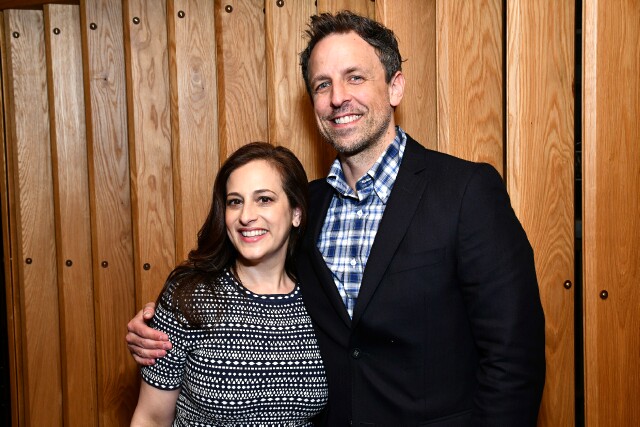 For the second time in three years, IFC last week arranged a lunchtime Upfront event in New York exclusively for journalists. The aim: connect the press with key network executives and stars in an exciting yet intimate setting.

Venue: The downstairs level of Upland, located on the corner of Park Ave. South and E. 26th St.  Known as a combo restaurant/bar/meeting space, Upland was also the site of IFC’s 2016 Upfront press lunch.  The relatively intimate downstairs room provides a peek into what chefs are dishing up on one side, with a podium and monitor in full view of everyone.  It’s the perfect environment for the press to mingle with executives and talent.  Grade: 4 Jacks

Presentation:  Quick overview of current and upcoming original series with a plentiful supply of video clips and star quips. No need for IFC’s format to make a course correction, observed President Jennifer Caserta.  (Caserta is pictured at top with Seth Meyers and below middle with IFC's Executive Vice President of Marketing and Digital Media Blake Callaway, Funny or Die CEO Mike Farah, IFC's Senior Vice President of Original Programming Christine Lubrano and Brockmire star Hank Azaria.)  “Smart comedy is our business,” she said, “and we could all use smart comedy right now.”  Grade: 3.5 Jacks 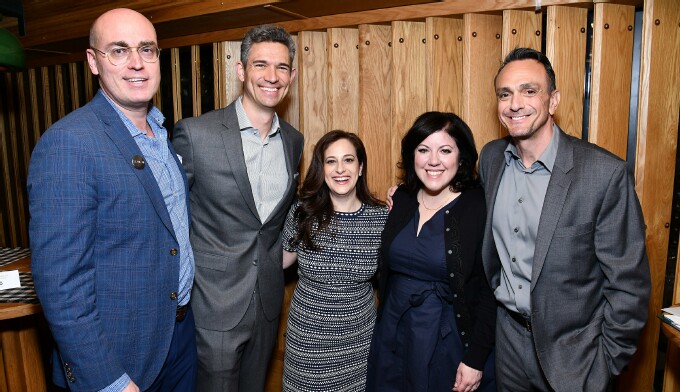 News:  Sherman’s Showcase, a development project announced last year, will go to series later in 2018. The series gives a humorous spin on Soul Train and similar programs of the 1970s and 1980s, incorporating musical and variety elements.  Popular scripted dramedyBrockmire received a two-season extension, generating new episodes through 2020, while Emmy-nominated Documentary Now! (on hiatus for over a year) will be back on the mocumentary trail early 2019.  Also, IFC will revive Night Flight, the 1980s music/pop culture showcase on USA Network, in 15-minute chunks starting April 20.  Grade: 3.5 Jacks

Star Time:  Stars in their own right, at least with the press, AMC Networks' Chief Operating Officer Ed Carroll and President and Chief Executive Officer Josh Sapan were in attendance from start to finish and available for conversations with everyone.  Once the formal presentation began there were entertaining one-liners aplenty from the celebrities in attendance.  They included Documentary Now! co-creator/Late Night star Seth Meyers, Brockmire star Hank Azaria and The Baroness Von Sketch Show crew.   Some choice remarks: “It’s so much nicer to have a show on TV, than when you don’t have a show on TV.” (Meyers)  “We are back for season three. Season three is really speaking to living in these garbage times.” (a Baroness).  “It’s opening day in baseball and every team has a shot at the title, except the San Diego Padres ... the (New York) Mets are the (New York) Yankees of not being the Yankees.”  (Azaria in character as Jim Brockmire).  Also, on hand: FODtv’s(Funny or Die TV’s) The Shirtless Painter, off to one corner with an easel busily touching up his latest creation -- a timely and unique TV Guide cover (with a reference to the week’s big news about the return of Roseanne).  Grade: 4 Jacks  (Pictured below, left to right: Josh Sapan, Jennifer Caserta and Baronesses Meredith MacNeill, Carolyn Taylor, Jennifer Whalen and Aurora Browne) 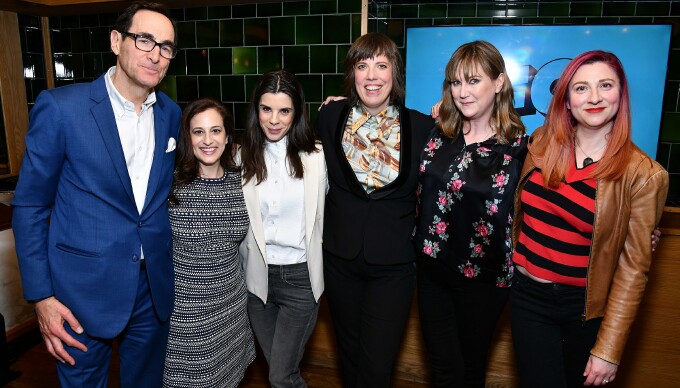 Cuisine:  Abundant selection of appetizers and entrees, with the entrees served to each table family-style. Best eats: marguerite and sausage/kale pizza slices, cod croquettes and tagliatelle with mushrooms. Worst eats: Nothing!  Grade:  5 Jacks for the appetizers; 4.5 Jacks for the entrees and desserts (including chocolate layer cake and peanut butter cookies).  Note:  Cuisine ratings do not figure into the overall Jacks score. 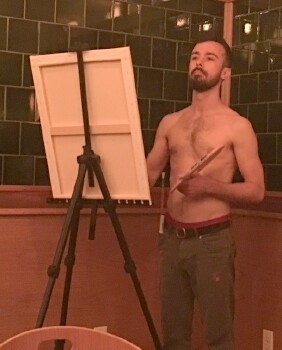 employees and celebrities will call out Bingo numbers that viewers can mark on cards they get online.  Prizes will be offered every week to people who get Bingo by the movie’s conclusion.  From afar, as natural a participation vehicle for both IFC affiliates and sponsors.  Grade:  3.5 Jacks

Overall Grade: 4 Jacks  A smooth presentation, solid comedy tidbits and extensive executive/star time that goes a long way.  Plus, something you don’t see every day … a shirtless painter.  Had this been a presentation for the advertising community it might have earned 3.5 Jacks, but as an event for the press it was close to perfection – crisp, focused, breezy and engaging.  Perhaps other cable networks will buy a clue and present similar press-only events throughout Upfront/NewFront season to get their messaging out to the industry and the viewing public, all at once.