Upfront News and Views: IFC Serves Up Laughs with Lunch

By Simon Applebaum April 28, 2016 Tomorrow Will Be Televised Archives 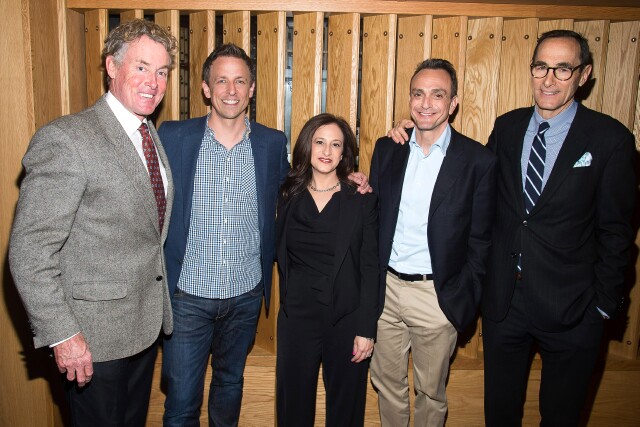 In between Viacom's showcases for BET and MTV last week, AMC Networks brought out the funny (and some amazing food) during IFC’s first-ever Upfront press lunch. Stars and executives filled the room. Even AMC Networks CEO Josh Sapan was on hand, and he was clearly enjoying the event as much as anyone else.

Venue: The lower level dining room at Upland, a popular restaurant on E. 26th St. just off Park Ave. South. It's a snug space; it reminded me of a warm brick cabin and a colorfully-tiled New York City subway station, with an opening to the kitchen on one side. Each table had room for one of three celebrity guests: “Documentary Now” executive producer Seth Meyers and actors Hank Azaria and John C. McGinley, both there to talk about their upcoming projects for the network. They all seemed very comfortable chatting with everyone around them. Grade: 4 Jacks

Presentation: A close replay of Comedy Central's effort a few weeks ago, when the channel's talent was front and center in several formats (stand-up/sketches/animation/new show clips). Network executives did get their face time before attendees, generally keeping it short and sweet. “This is a lovely space," noted IFC President Jennifer Caserta. "If this place is good enough for President Obama, it's good enough for you." (Obama and his daughters dined at Upland last year during a visit to the city.) Glancing toward the stairs that lead to Upland’s first floor, a much larger space, Meyers quipped, "If [advertisers] jump in with us, we could play the big room here." (Meyers, second from left, and Caserta, middle, are pictured at top with McGinley on the left, Azaria and Sapan on the right. Caserta is pictured below with Arlene Manos, AMC Networks' President of National Advertising Sales.) Grade: 3.5 Jacks 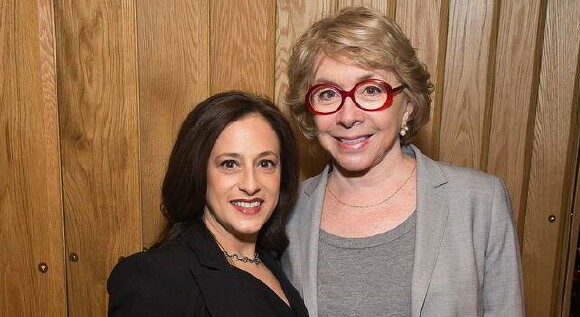 News: “Stan Against Evil,” McGinley's new horror-com in which demons run amuck, starts this fall. It will be produced in Atlanta, the home base for “The Walking Dead” on sister network AMC. One can only imagine the crossover implications. "What's on the page [of my new series] is so subversive,” McGinley laughed. “It’s Archie Bunker vs. dead ghouls."

“Brockmire,” Azaria's effort in tandem with Funny or Die, will have him playing a major league play-by-play broadcaster on the comeback trail after a public meltdown. He is "a character I've been doing one way or another for 15 years,” Azaria said. “Baseball announcers can say whatever they f---ing want as long as they give the count." Guests were really taken with Azaria's generic imitation of baseball announcers; in fact, his vocal inflections reminded many of Lindsay Nelson, Bob Murphy and Ralph Kiner, the legendary trio that followed the New York Mets all the way from baseball’s basement to the World Series winners circle. “Brockmire” will debut sometime in 2017.

Star Turn: No performances here, so no Jacks.

Cuisine: A grand slam right from the start, thanks to slices of sausage/kale and asparagus pizza served before the main course. Best chow-down (and nominee for Best of the Season): Spicy sausage/kale ragu on pappardelle pasta. Close runner-up: Farro and chickpea with arugula and smoked almonds, spiced with pickled carrot and leeks. No worst contenders here. All this was served family style, a departure from Upland's normal practice. Count on me coming back for a bigger helping in the near future, if only for that delicious pizza and pappardelle. Grade: 5 Jacks (Note: Cuisine does not figure in the overall Jacks rating, although it is very tempting to make an exception here. Trust me on this.)

Next at bat: MTV

Images courtesy of IFC. The opinions and points of view expressed in this commentary are exclusively the views of the author and do not necessarily represent the views of MediaVillage/MyersBizNet management or associated bloggers.