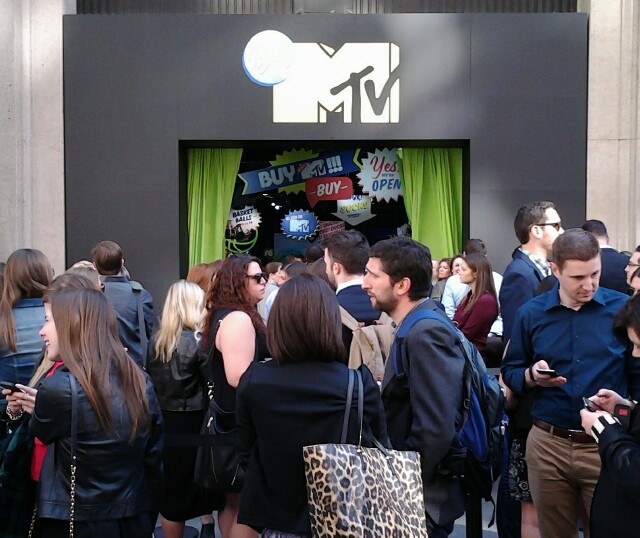 Venue: Inside Moynihan Station on W. 33rd St., around the corner from Madison Square Garden and the U.S. Post Office complex. To reach the main festivities, attendees first went through a giant swag palace, created as an ultra-discount merchandise store with check-out counters. MTV stocked the place with a variety of swag carrying its familiar logo, including socks, yoga mats, umbrellas, miniature basketballs, T-shirts, underwear, caps and tote bags. (Stay tuned for more on the swag.) An indoor carnival awaited guests on the other end of the floor, highlighted by three raised circular stages, a games of chance corner, a virtual reality showcase of pop art masters, people giving out pineapple and strawberry margarita ices in packets, hanging pretzels and a wind cabinet blowing fake dollars -- right out of the Diamond Head Game! (Anyone remember the Diamond Head Game?) Believe me, you had to see all this to believe all this. Grade: 4.5 Jacks for sheer audacity and all that swag; 4 Jacks for execution.

Presentation: The mojo, the swagger, the brash edge and the irreverence which put this network in the hall of transforming media fame is back, starting now. That message didn't wait to come from the lips of network president Sean Atkins, who arrived in that role last fall. "We're doubling down on everything you've loved about this brand," he said. "Most of all, we are bringing back the music and having it be our muse. This is the new MTV, and we're doing things differently." From here on, whether unscripted or scripted, the majority of series ahead will have a music or pop culture connection. As part of that movement, MTV News is being revived with a new team of journalists and expanded presence both on and off-air. Rather than one long stage act, Atkins and his colleagues made their case in several acts (using the multiple stages) and giving attendees short intermissions between them to network or snack. Grade: 4 Jacks

News: Fourteen new series are on tap, premiere dates undisclosed. On the music side, “Wonderland,” billed as the channel's first live performance series in about two decades, will feature three bands or soloists per episode. “MTV Unplugged” returns in updated form, while MGM TV chief and “Survivor” executive producer Mark Burnett oversees a new hip-hop talent competition. “Studio 24” will pair two artists to create a new song in just one day, and “Year One” explores the breakthrough year of a music superstar. Scripted series ahead include “Acting Out” (reenacting stand-up comedy routines), “Loosely Exactly Nicole” (“Girl Code” personality Nicole Byer out to live large in Hollywood) and “Sweet/Vicious” (a vigilante dramedy involving two college students). Pitbull, Drew Barrymore and John Legend have scripted projects in development. Grade: 4 Jacks (It would have been 4.5 Jacks if premiere timeframes were announced.)

Hosts: Byer delivered the sass when not turning things over to Atkins and other MTV executives. As for Atkins, he delivered the points in credible fashion. Grade: 3.5 Jacks

Star Turn: Grammy-winning rapper Kendrick Lamar (pictured at top) has come a long, great way since we first caught his act at Vevo's NewFront two years ago. Lover of rap or not, he gets you involved, and what a backup band in his corner. Grade: 4 Jacks

Cuisine: Variety in vogue here, from pulled pork buns to pasta with turkey, beef or veggie meatballs. Best chow-down: Soba or rice noodles with mushrooms and other toppings on hand. Worst chow-down: The veggie meatball. Not much flavor. Grade: 3 Jacks (Note: Cuisine does not figure in the overall Jacks rating.)

Special Note No. 1: Prince died a few hours earlier that afternoon. In response, MTV converted some of the event into a celebration of the mega musical star. Attendees were given purple wrist bands to wear, the house disk-jockey played Prince's top songs throughout, and a color necklace given to all attendees turned purple when the presentation began. Viacom executive (and longtime MTV staff member) Doug Herzog devoted his opening remarks to Prince, calling him "a once-in-a-lifetime artist." The event's moving highpoint came from MTV News correspondent Jessica Hopper, who covered Prince while based in Minneapolis. "Prince was not just an icon. He was our icon, our north star," she said while tearing up. "He made it great to be different."

Special Note No. 2: Now as for that swag ... before attendees exited onto W. 33rd St. they were given 30 seconds to plop as much merchandise as they could into their yellow MTV gift bags. Yoga mats were the thing to grab among my group. I ended up with three pairs of yellow socks and an umbrella.

Overall Grade: 4.5 Jacks  The most ambitious, edgy and inventive staging so far this season. Extra special kudos to the organizers for including tributes to Prince with just a few hours to create them. Now we’ll wait and see how MTV carries out its promise of a mojo/music comeback.