Upfront News and Views: Much Ado About Freeform

By Simon Applebaum April 12, 2016 Tomorrow Will Be Televised Archives 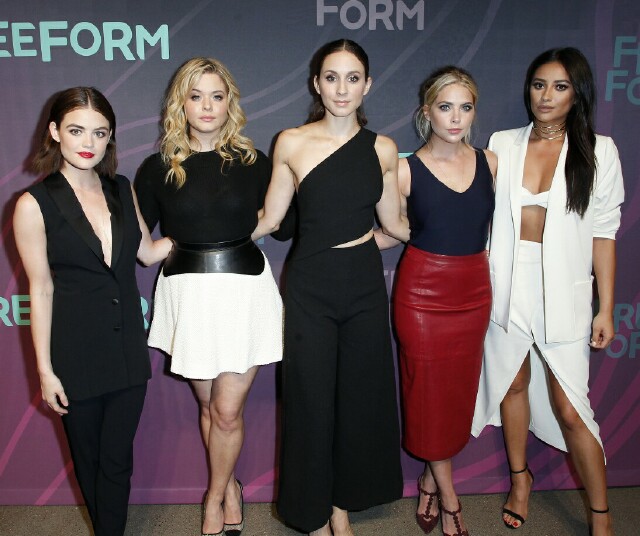 The network that three months ago morphed from ABC Family into Freeform took full advantage of its New York Upfront event last week to stage a coming-out celebration and to preview its impressive development of original content.

Venue:Spring Studios, located a few blocks from the Holland Tunnel entrance, last used in this manner for Conde Nast Entertainment's NewFront showcase last spring. Situated several floors above street level, the space was large and largely white in color, including the chairs, walls and stage. The stage itself, featuring a runway and rectangular screen, ran 77 feet long by 11 feet high. Show talent sat in a comfy open greenroom at one corner, with a bar serving pre-presentation drinks. The wall opposite the stage offered a view of nearby surroundings and the Hudson River. By show time, the room was SRO in the back and on the sides. Grade: 4 Jacks

Presentation: At last year's ABC Family Upfront, executives promised to draw "becomers" into their viewer tent, as in Millennials between the ages of 12 and 34 who are experiencing mileposts in their lives from first date to first child. "That audience is hard to reach," acknowledged Freeform Executive Vice President of Sales and Marketing Laura Nathanson. "(In our short time as Freeform) we reach them in masses." With 31 million unique viewers each month so far this year, the network is fast becoming "the young adult brand of (parent) Disney," declared Freeform President Tom Ascheim (pictured above). The aim from here on: Cultivate loyalty among diverse Millennials who are socially-connected, tech-savvy and have an open outlook on life. "This group of young people consider themselves the force to transform the world," Ascheim noted. How to reach them: A wider net of first-run programs, simultaneous linear/online/smart TV-device/mobile distribution and off-net outreach starting with "Freedom Fest," an annual music/comedy/pop culture outdoor festival kicking off later this year. A kinetic wave of wide-screen graphics and video clips supplemented the remarks. Grade: 4 Jacks

News: Freeform's first expansion level involves three new series this summer: “Guilt” (sister becomes prime suspect of her roommate's murder, premiering June 13); “Dead of Summer” (terror spree at a mid-America campground, debuting June 28) and “Cheer Squad” (unscripted profile of a championship cheerleader team, set to begin August 22). For winter 2017, at least two more series will launch: “Beyond” (a conspiracy drama involving a 20-something who wakes up from a 12-year coma) and “The Letter” (unscripted look at four young women). “Famous in Love” (Bella Thorne as a college student turned movie star) and “Cloak and Dagger” (interracial superhero romance based on the popular Marvel comic characters) could join the winter 2017 lineup, as could “Issues,” a New York-produced drama fashioned on Cosmopolitan editor-in-chief Joanna Coles. (She will be an executive producer.) For the first time, late-night will become an outlet for originals. Two candidates there: “Later Bitches” (a young female group talk show) and “Alice” (a weekly anthology of short-form series). An extensive series development slate for 2017 and beyond includes “Hunted” (a mystery with Mila Kunis among the executive producers), “Lone” (a survivalr drama from McG), “Misfits” (an adaptation of the hit British series from “Gossip Girl” creators Josh Schwartz and Stephanie Savage), “New People” (a dramedy about transgender individuals) and “Rising” (a Latina coming-of-age drama with Selena Gomez as co-executive producer). Also in the hopper: several made-for-TV films, including “Greek: The Reunion” and “Snapshot,” a look back at pop culture milestones from the last 20 years, produced in association with ESPN Films. Grade: 4.5 Jacks

Hosts: Ascheim, Nathanson and company handled their hosting duties ends well, albeit with a bobble here and there. Ascheim even had a Marco Rubio moment, reaching into the audience for a water bottle to get a sip in. Grade: 3 Jacks 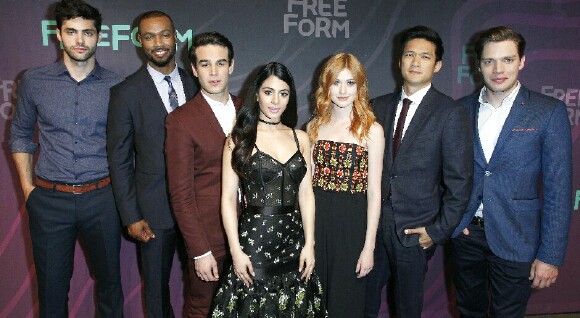 Star Time: A trio known as The Freeformers opened and closed the presentation with a mix of rap and song. Best moments: burts of improv, to a human beatbox, extolling the virtues of multi-platform, binge-watching, Big Data and fragmentation. The casts of Freeform's monster success "Pretty Little Liars" (pictured at top) and new hit "Shadowhunters" (pictured above) were on hand, too. A shout out also to the off-runway voice with this pre-show reminder for attendees: "Stop all the texting, stop all the tweeting, show's going to start, so go find the seating." Grade: 3.5 Jacks

Cuisine: Best chow-down: The dim sum buffet and (for the second time this season) pulled pork sandwiches on glazed donuts (this one with relish on top). Worst chow-down: Pretzels heavy on the taste and the stomach. As tasty as most of the food was, the food stations themselves were small and situated in room corners, resulting to big lines. In contrast, the bar in each room was way too big. How often does that happen? Grades: 3 Jacks for the food; 1.5 Jacks for the environment.  (Note: Cuisine grades do not impact the overall Jacks rating.)

A quick review of our Jacks scale:

Next up: Azteca America, our first Spanish-language player this season.