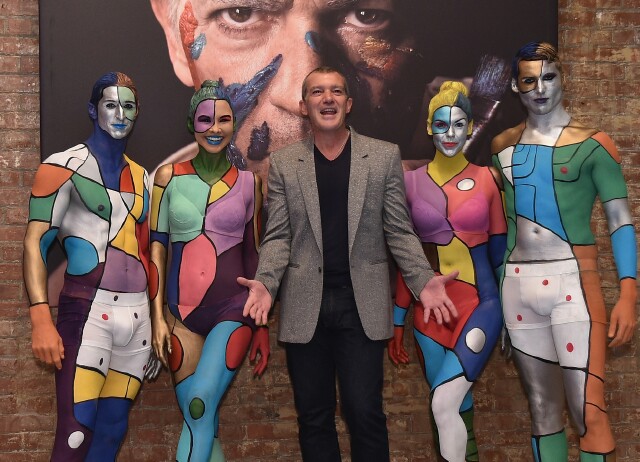 National Geographic (and sister services Nat Geo WILD and Nat Geo Mundo) promised to give attendees to their New York Further Front gathering last week an immersive, intimate affair.  They were, in a word, true to their word.

Venue: 214 Lafayette St., a multi-story edifice near the corner of Kenmore St.  (Fun fact:  The building used to be the home of Heidi Klum!)  Black drapes used as scaffolding on either side of the front doors marked the spot.  The ground floor featured a red-carpet area for celebrity snapshots and the bottom of a swimming pool where a diver flashed the familiar yellow border of Neo Geo’s logo at attendees.  The second floor featured two rooms.  The largest one was home to the pool, with body-painted models at either end looking like living Pablo Picasso-like mod art to highlight the upcoming second season of Genius).  (Note:   Have a hunch this room may be familiar to Mr. Robot viewers.  Was this where Sandrine Holt got zapped to death in an episode telecast almost two years ago?  Would a confirmation from Robot creator Sam Esmail or USA be possible?)  In the other room, attendees could explore Mars via virtual reality headgear.  A lavish dinner was served one flight up, and the top floor two flights up featured exhibits tied to long-running series Explorer and an outdoor patio where after dinner, dessert was served and guests could mingle with puppies looking for a home through North Shore Animal League.  Also, Frankenstein’s Monster made an appearance (more below).  Another fun touch: Factoids were written on several steps on all of those staircases, making each climb both physically and mentally beneficial.   Grade: 5 Jacks

Presentation:  All about positioning Nat Geo as a home for unscripted and scripted storytelling with a purpose, according to Nat Geo Global Networks CEO Courtney Monroe, who spoke between courses during the dinner.  “We’ve become part of the zeitgeist,” she said, introducing clip after clip demonstrating the quality and scope of Geo/Geo WILD/Geo Mundo content.   Monroe and National Geographic Partners CEO Gary Knell interspersed their comments between dinner courses, served by Lighthouse chefs Naama and Assaf Tamir.  Grade: 4 Jacks for the format; 5 Jacks for the videos. 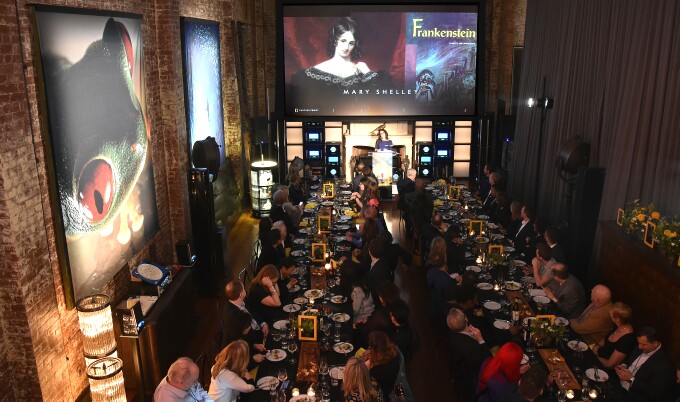 News:  Two new scripted miniseries are on the way: The Hot Zone, dealing with the Ebola virus epidemic of 1989 (with Ridley Scott as executive producer) and Valley of the Boom, a six-part depiction of Silicon Valley pioneers that will incorporate interviews with the real subjects and their colleagues.  Three more scripted series/limited series are under development, including an anthology-style adaptation of the Oscar-nominated film Hidden Figures.  Season 3 of Genius is set for 2019.  Nat Geo announced during dinner that its subject would be Frankenstein author Mary Shelley.  New unscripted undertakings include Hostile Planet, a six-part look at extreme animal environments; another season of Cosmos, this one titled Possible Worlds; a four-hour live wildlife travelogue from Yellowstone National Park, and a two-hour live Brain Games special.  Upcoming Nat Geo WILD series (announced post-event) include Prairie Dog Home Companion and Babies Diary, while Nat Geo Mundo will offer Bios, a series about Latin America cultural icons.  Grade: 4.5 Jacks

Hosts:  Monroe and Knell stayed on point with their respective commentaries.  Grade: 4 Jacks

Star Time:  A variety of celebrities from all three networks showed up for maximum face time with attendees in the various exhibit rooms and over dinner.  Dr. Jan Pol (The Incredible Dr. Pol himself) and wife Diane were to my left, The Amazing Race host Phil Keoghan (who will become host of long-running series Explorer this fall) sat across from me and actor Esai Morales (who co-stars on Mars’ second season this fall) was a few seats away.  Other notables included Morgan Freeman, Katie Couric, Antonio Banderas (pictured at top, center), his Genius co-star Alex Rich and Boom co-star Bradley Whitford.  Grade: 5 Jacks

Overall Grade:  4.5 Jacksfor a sensational combo of venue, engaging content showcase and celebrity interaction.  Not to mention having Frankenstein’s Monster offering a generous swag backpack (including a free pass to any national park, good for one year) before departing the premises.