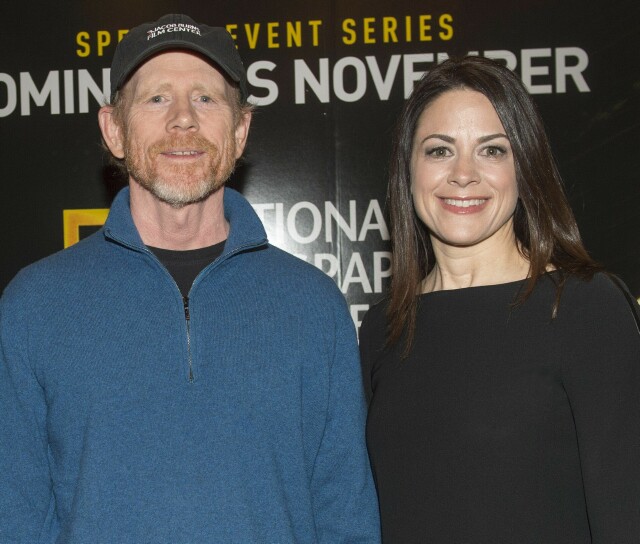 Venue: Onyx Room, located on the mezzanine level of the ultra-modern Park Hyatt New York hotel on W. 57th St. I didn't walk into a room here; I walked into an environment not unlike being on Mars, from the red lighting to artifacts scattered at each corner of the room and soothing yet otherworldly jazz. My breakfast table was near an astronaut dressed to inspect the planet's terrain with a rover vehicle. Truth be told, I didn't get why one corner had clothes coming from another century on a rack. A rotating on-screen globe of Earth welcomed all. Grade: 4 Jacks

Presentation: No beating around the bush here, right from the impressive opening video. At every opportunity, Nat Geo made clear its intent to be the HBO or Netflix of science, exploration and natural world content, whether unscripted or scripted. "We're out to be the world's premium brand [of this arena] and have our shows extend across every consumer touchpoint," declared National Geographic Global Networks CEO Courteney Monroe. In particular, this premium push is aimed at increasing viewership of both NGC and Nat Geo WILD among women and Millennials, especially multicultural Millennials. The leap in series production and production quality comes from NGC's upgraded relationship with co-owner 21st Century-Fox. Under that relationship, series will get global distribution quicker and more than 25 percent of annual proceeds will be turned over to the National Geographic Society for future exploration projects. Time devoted to marketing and ad sales pitching was refreshingly short. Grade: 4 Jacks

News: “Mars,” a six-part unscripted/scripted hybrid miniseries about the possibility humans will colonize the Red Planet, will debut on NGC in November.  “This is most emblematic of our scale and scope going forward," Monroe noted. The scripted elements will feature Asian-American twins with visions of a Mars journey ahead. Ron Howard (pictured at top with Monroe) will executive produce with his Imagine Entertainment partner Brian Grazer, and “Days of Grace” director Everardo Gout will oversee. “I hope this fires up the belief that space exploration is a vital part of the human experience," Howard said. Other new series, a few designed to give viewers an immersive "you are there" outlook, include “Origins” (pivotal elements in human development, hosted by Jason Silva of “Brain Games”), “Chain of Command” (a year inside the battlegrounds of Afghanistan) and “Lawless Oceans” (maritime crimes exposed and brought to justice). “Explorer,” the award-winning series returning on a monthly basis last fall (after a five-year absence), will go weekly later this year with a magazine format, studio audience and post-segment discussions. And before the end of 2016, NGC will present a primetime special titled “Earth Live!” in which nature will unfold live on all seven continents. If this does well, “Earth Live!” could become a semi-annual or quarterly event. As for scripted, two series have been greenlighted: “Black 22” (about an all-black police unit in the 1920s) and “Blood Ivory” (dramatizing efforts to control animal contraband/poaching worldwide). Look for a number of other scripted series to head into production later this year, Monroe promised. At Nat Geo WILD, new series will include “Savage Kingdom” (animal predators and prey in battle, with each episode taking one animal's point of view) and “Project Puppy” (families raising pooches through adoption).  No scripted projects at WILD yet, though the idea of scripted series there has been raised. Grade: 4.5 Jacks

Host: Monroe impressively commanded the proceedings, assisted by plenty of video clips, and near the end, a cute “Project Puppy” candidate. Her shining quip: "I can only hope we can pass the Kardashians one day as the celebrity brand on Instagram. For now, we'll be the leading non-celebrity brand there." Grade: 3.5 Jacks

Star Time: It was great to see Ron Howard discuss “Mars” in person, but I wished he could stick around post-presentation to be with many of the press folks in attendance. Grade: 3 Jacks

Cuisine: It was as chic as the environment. Best chow-down: The duck prosciutto on top of a fontina cheese glaze. Even better thirst-quencher: Green coconut iced tea. Worst chow-down: Those baked eggs! Yuck. Grade: 2.5 Jacks

Overall Grade: 4 Jacks  A presentation that stayed on point, coupled with a fitting environment and video clips demonstrating the "premium" experience ahead for viewers and advertisers alike.

As a reminder, our Jacks ratings are as follows:

Next up: Scripps Networks Interactive