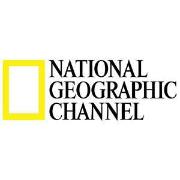 Venue: The lower level of Ma Peche restaurant on W. 56th St. near 5th Ave. Press, talent and executives from National Geographic Channel and sister service Nat Geo Wild faced each other for lunch around long, picnic-fashioned tables. For a more immersive experience, videos, logos and graphic slides were projected on three of the room's four walls. While the atmosphere and ability to nosh with talent was welcome, the inability to move about and spend time at other tables was not. The space was way too cramped. Ma Peche's chefs kept the delicious food coming, served family-style. My pick: vegetable rice cakes (tasted more like gnocchi) with mushrooms over lobster rice. Grade: 3 Jacks for the room/5 Jacks for the food

Presentation: With National Geographic Channel reaching 90 million homes and record single-program viewership last month for the original movie “Killing Jesus,” look for a refocus on unscripted and scripted miniseries in the coming year, CEO Courteney Monroe advised. "We're positioning ourselves as the leading scientific and exploration network," she said. The drive for more "smartertainment" series in the mold of award-winning “Brain Games” (a big point at last year's Upfront event) will continue, but at a reduced speed.

News: Happy to report that Nat Geo gave us a tsunami of news. For the first time in decades, sponsor General Electric will be a TV content supplier; think the days of General Electric Theater or GE True. Its re-entry this fall is “Breakthrough,” a “30-for-30”-type anthology miniseries (six episodes minimum) presenting visionary advancements from leading scientists worldwide, co-produced with Imagine Entertainment and Asylum Entertainment. Giamatti, Ron Howard, Angela Bassett and Akiva Goldsman will be among the directors, with Howard as co-executive producer. Nat Geo Mundo will simulcast the series in Spanish and GE's participation will not include advertising during episodes. A pair of scripted miniseries will premiere during the season ahead: “Saints & Strangers,” about the aftermath of the Pilgrims landing on Plymouth Rock (Overmyer aboard as an executive producer and key writer; Thanksgiving weekend the planned debut), and “History of the World ... For Now,” using sketch comedy, documentary sequences and animation to depict the evolution of society (late 2015/early 2016). Of the two, “History” could evolve into Nat Geo's first scripted series if successful. The miniseries push begins June 1 with eight-hour “American Genius” and continues July 12-13 with “The 2000s: A New Reality.” Meantime, “Explorer,” one of the most awarded weekly series in TV history during its 25-year run (1985-2010, with some 60 Emmys alone), will return as a monthly special, this time coordinating subject matter with National Geographic magazine. At Nat Geo Wild, new series include “Vet School” (Cornell University students get vet ed) and “Animal Storm Squad” (first responders treat pets injured during natural disasters). Grade: 5 Jacks

Host: Monroe, Pastore and Daniels handled their presentation portions well, while some of the talent remarks dragged on. Near the finish, we sensed Wild had to speed their segment to finish on time. Grade: 3.5 Jacks

Overall Grade: 4 Jacks The news, food and talent appeal were plentiful and hearty. A room with more room and some presentation tweaks would have pumped it up to 5 Jacks.