Upfront News and Views: Nickelodeon Kicks It Off

By Simon Applebaum March 22, 2016 Tomorrow Will Be Televised Archives 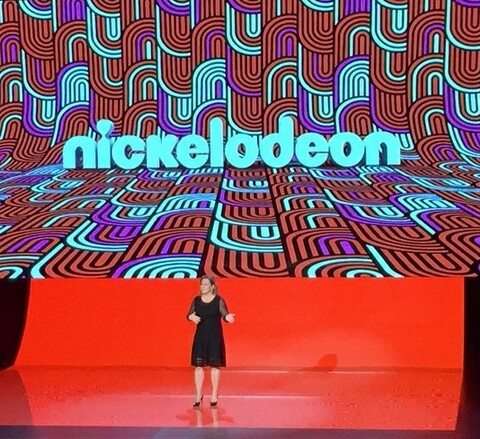 The Upfront and NewFront season has begun! Over the next three months, television networks running over broadcast, basic cable and/or satellite, plus digital services available through smart TV sets and devices smartening up those sets (such as Roku, Chromecast, Apple TV, Amazon Fire TV and Shield), will go public with their future programming strategies. The aim: Win a greater share of the advertising dollars transacted ahead of the 2016-17 TV season, which “begins” in mid-September, even in the age of year-round Peak TV. In what's become an annual MediaVillage tradition, we'll summarize and critique as many of these pubic showcases as possible, awarding coveted Jacks ratings for the overall events and in various categories from news value to the quality of presentations and presenters.

Our Jack scale goes from zero to 5 as follows:

For this Upfront round, we're introducing two new categories -- Star Turn, covering performances during or at the end of presentations, and Cuisine, all about those post-event food areas we like to hang around when not in search of executives or celebrities.

Venue:  Alice Tully Hall on the Eastern/Northern end of Lincoln Center (corner of Broadway and W. 65th St.). One of the most pristine auditoriums in which to stage anything, and Nick's trimmings inside were kept to a minimum compared to previous years (a screen center stage with colorful, often surreal landscapes and the Nick logo). The front lobby was more playful in tone with long sofas, high chairs, an animated video wall and a piece of green slime hanging near the front doors. Outdoor billboards near the corner retained the tone, each one with a yellow hand in "thumbs up" position. (A few pedestrians noticed the billboards, but one child remarked to his mother that SpongeBob SquarePants was absent.) With all those fine creative touches in place to greet attendees at the front entrance, why were they asked to use the side doors on W. 65th St., a far less colorful entry? Grade: 3.5 Jacks

Presentation: Divided into three parts, all delivered in rapid-fire fashion -- declaration, advertising strategy and future content. Impressively, the event lasted less than an hour. The declaration was short and clear. "We're back on top, with plans in place to keep up there," announced Cyma Zarghami (pictured at top), President of parent Viacom's Kids & Family Group. "We're making content for every genre, every daypart, every screen." The elaboration was just as specific, pegging Nick's monthly reach at 30 million kids, gains with both new and ongoing audiences, and the growth of smart TV device usage via Roku and Amazon Fire TV.  For the first time, considerable time was turned over to campaigns between specific advertisers and programs, under the umbrella of Viacom's Velocity unit, such as Mattel promoting Teenage Mutant Ninja Turtles toys, or Shoe Carnival engaged in a sweepstakes effort. Just as impactful, ad campaigns with cause or social outreach aims were discussed.  Grade: 3.5 Jacks

News: At least 16 new series will be introduced this year, starting with the long-anticipated adaptation of the hit Jack Black film “School of Rock” this Saturday (March 12). The big new thrust: Live-action sports series, including “All in With Cam Newton” (the Carolina Panthers quarterback and National Football League MVP mentors kids in fulfilling their aspirations) and two from the house of Viacom series maker/personality Rob Drydek – “Jagger Eaton's Mega Life” (the popular teen skateboarder travels worldwide and tries other pastimes) and “Crashletes” (viral athletic miscue clips with celebrity commentary). "Sort of a guilty pleasure, isn't it?" Zarghami asked about “Crashletes.” Newton appeared live to promote his series and looked somewhat tentative, while New York Knicks star Carmelo Anthony sparkled when introducing his new Mutant clothing line (in conjunction with the new Nick-produced movie this summer. (Various sports media, including “The Boomer & Carlton Show” morning simulcast on CBS Sports Network, devoted space or airtime to Anthony's remarks.) New toons include “Welcome to the Wayne” (boys exploring the unpredictable crannies of their New York City), “The Loud House” (hijinks among a huge household, announced in development last Upfront) and “Pinky Malinsky” (a hot dog's mockumentary life). Made-for-TV movies will be increased, featuring a “Hey Arnold!” reboot and game show classic “Legends of the Hidden Temple” reborn as live-action adventure. Grade: 4 Jacks

Hosts: Zarghami and her executive colleagues were at ease with the audience and the rapid-fire format. We wished that apart from the sports guests, a popular Nick personality or toon star would get some show time, as SpongeBob did last year with the clever opening number from the upcoming Broadway musical. Grade: 3 Jacks

Star Turn: Singer/rapper Flo Rida closed things out with his latest hits "My House" and "Low" – during the latter, audience members were invited on stage to get "low." To everyone's delight and surprise, they sure did, including Zarghami and Newton. Surprising non-star turn: the “School of Rock” band, looking/sounding great in a film clip, but not playing live. Grade: 4 Jacks

Cuisine: A pick between sushi and a set of Mexican appetizers, led by chicken/beef/chorizo sausage skewers. Best chow-down: the mushroom rolls on the sushi tables. Worst chow-down: the chicken skewers (a bit bland unless you topped then with mustard-colored aioli). Grade: 3 Jacks

Next up: The other main attractions of Viacom's Kids & Family Group: TV Land, Nick@Nite and CMT